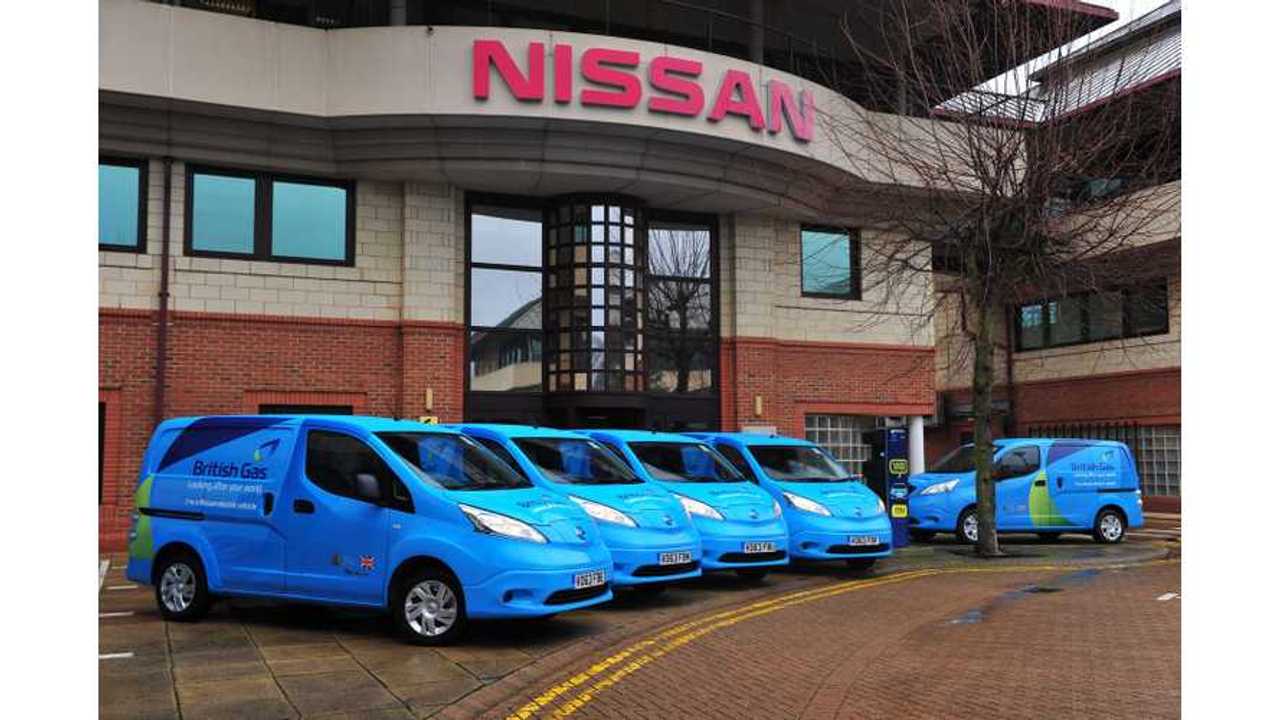 At the Commercial Vehicle Show 2014 at NEC in Birmingham, UK, British Gas announced an order of 100 Nissan e-NV200 vans.

This is the UK's largest electric commercial order following the successful pilot of 28 e-NV200, which were tested by British Gas last winter.

Initially, British Gas ordered 50 units, and a further 50 will join the fleet by December 2014.

In the longer term, British Gas would like to swap 10% of its 13,000 home service vans to all-electric ones and Nissan is in prime selling position to fulfill this eventual goal.

Here are some additional e-NV200 specs:

General sales of the e-NV200 start in June in the UK, then to Germany in July.  And yes, Nissan has confirmed it will be coming to the rest of the world (and America), but a specific launch date has yet to be given.  (Think 1st half of 2015 if we had to guess)

"Launched last November to determine viability of electric vehicle technology as part of British Gas fleet operations, the six-month pilot saw Nissan and British Gas working with Hitachi Capital Commercial Vehicle Solutions to manage the fleet operations and Gateshead College to train drivers in how to drive the 100% electric Nissan e-NV200.  Hitachi Capital will be funding the purchase of the Nissan e-NV200s by British Gas as well as managing the fleet of all-electric vehicles."

"The UK's largest ever electric commercial vehicle evaluation to date, which saw the 28 e-NV200s cover in excess of 60,000 miles between them, was launched to assess how the vans performed in winter conditions during typical British Gas home services daily usage patterns and was such a success that some drivers were reluctant to hand back their vans."

"I can sometimes spend hours each day driving between customer'' homes, but the Nissan e-NV200 made that just a little bit easier. It was smooth, stress-free and I was really disappointed when I had to give it back.  I would absolutely recommend the van to other engineers, particularly as the technology improves and more charge points are installed. It's definitely the future."

"We have been extremely impressed with the performance of the Nissan e-NV200 during our winter trial. The feedback from our engineers speaks for itself, with the majority saying they would be happy to keep the van permanently."

"Taking on 100 of these vehicles on a permanent basis demonstrates our continued commitment to leading the adoption of this technology amongst large vehicle fleets in the UK.  With technology and infrastructure improving all the time, we look forward to expanding this number in the coming years."

"The success of this closely-watched trial with one of Britain's biggest organisations puts Nissan in a great position in time for the official launch of the e-NV200 this June.  The feedback we have received from the British gas engineers has been invaluable as it has ensured that the e-NV200 that goes on sale in June is well-suited to British road and business conditions and we have high expectations for its future and ongoing success."

"We have been closely monitoring and analysing the trial throughout the six months it has been running and have been delighted with the way the e-NV200 has performed.  We fully expect to see a continued increase in the adoption of electric vehicles for commercial fleet operations, and the success of the British Gas trial provides compelling evidence to support business use of electric vehicles."

"It is significant when a major company like British Gas recognises the merits of electric vehicles with a major order. It shows that businesses can turn to plug-in vans with confidence, with the knowledge that they can be the most sensible and economical choice for their fleets.  Drivers have found the vans are much cheaper to run than a regular petrol or diesel counterpart and they perform well in all weathers. The government is committed to supporting the uptake of ultra low emission vans, placing the UK as a world leader in their development and use."