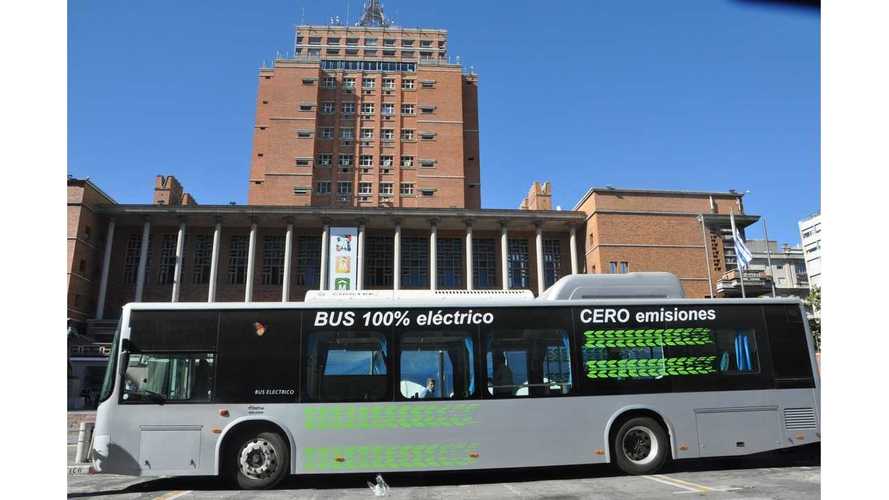 In Uruguay, BYD has ended trials of electric bus and taxis.  The results are now in.

We don't know if this deal (Uruguay may purchase 500 electric BYD buses) will come to fruition, but it seems that the BYD ebus took the task. At the announcement met the entire hall of officials:

Uruguay’s National Utility Company (UTE) said that the BYD ebus has an average range of 252 km (~157 miles) per night-time charge and consumes 1.26 kWh / km (for the 324 kWh battery pack). Such results were noted after 1,279 kilometers (~800 miles) across 4 different Montevideo urban routes, at different times and with different speeds.

“Electric vehicles reduce environmental pollution, city noise pollution and national fossil-fuel dependence. Considering that the transportation sector represents over 30% of the total energy consumed in the country, it is very important to domesticate this fuel spend. The electrified public transportation is in pivotal for the country’s energy policy and the transformation to renewable energies.”

Interesting are the results of the economic study, which indicate that electric buses as well as taxis can be a viable option, provided the operator can afford the higher upfront costs:

"The economic study presented by one of the members of the Committee, Mr. Gonzalo Marquez, showed that the life time total-cost of ownership (TCO) of an electric bus was 60% less than a standard diesel bus (considering initial purchase costs, energy re-fueling cost and the lowered maintenance cost of electric buses during operation). In the case of electric taxis analyzed, the life time total cost of ownership was estimated at 50% that of traditional gasoline taxis."

Now we are waiting to see if Uruguay signs the deals to buy 500 BYD buses.