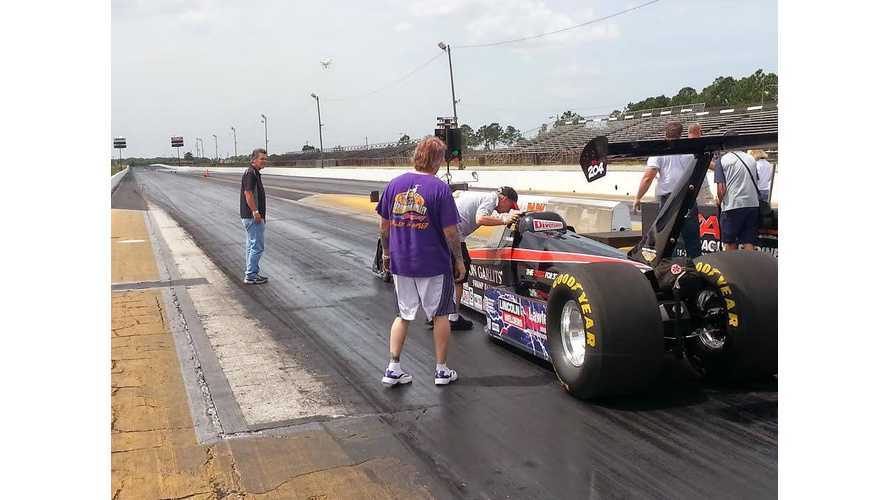 "In one smoky run down the dragstrip on August 2, 1964, a young “Big Daddy” Don Garlits became the first drag racer to officially exceed 200mph in the timed ¼ mile. Garlits supercharged Top Fuel slingshot eclipsed the hallowed ¼ mile of asphalt at Island Dragway, NJ in 7.78 seconds with a high speed mark of 201.34 mph. The 200 mph barrier was forever broken."

Final Checks Before The Run

That's how the day of "testing" played out.  Though 200 MPH was not achieved, Garlits was satisfied with the results:

"Conceived as a day of private testing, the event became one for the history books. It was also a day of significant progress and great learning for the team. The “Quest for 200 MPH on Batteries” will continue and was invigorated by the long-awaited and much-anticipated test. Garlits told observers that the car was a lot of fun, sat firmly, had a solid hit and, and pulled very hard. As for the Quest itself, Big Daddy summed it up, “We didn’t get the 200 but we set a new record. Our 200 is coming up next!"

However, this time around the achievement comes not from liquid fuel powering an engine, but from electrons powering an electric motor to the tune of 1,500 kilowatts / 2,000 HP

That's a record and indeed it marks the first time ever that a pure electric dragster hit that MPH in the 1/4 mile.

Props to the legendary Garlits and his supporting crew.

For more on the SR-37 Quest EV dragster piloted by Garlits, click here.

“Big Daddy” Don Garlits and the SR-37 “Quest for 200 MPH on Batteries” Dragster Team traveled to the historic ¼ mile dragstrip at Bradenton Motorsports Park, FL yesterday, April 30, 2014, to shake out the ultimate battery-electric (BEV) digger. This was the first full run test for Garlits and team. It was also the first opportunity since SEMA-2013 for the public to see the gleaming SR-37 after the team spent the past several months completing and installing the 2014 powerplant of Lawless Industries 6-pack of GE Motors, Manzanita Micro “Zilla” Controllers, and HighTech Systems LLC lithium polymer (LiPo) battery packs.

Under a muggy cloud cover and with a mid-week crowd near a thousand, Big Daddy and the team proved the SR-37 EV concept and much of the on-board hardware with eight hard launches and six solid runs in their Quest for history.

With 1500 kilowatts of LiPo battery power on tap, Big Daddy was working with more than enough horsepower (2000+) to entertain the crowd. Garlits and SR-37 ignited the Goodyear Eagle Racing slicks with the first burnout of the fully-completed dragster. Spectators, many of them diehard fuel fans, were taken aback by the thunderous linear laydown of EV energy and football field long plume of tire smoke.

Mid-day run attempts at full power resulted in some circuit-hold issues at full load amps, truly a new lexicon for fans of Big Daddy. Circuits stabilized, the team sent Garlits back to the line for an afternoon drive.

Big Daddy hit SR-37 hard on the 5th run and set a new EV ¼ mile drag racing record with a shot of 7.53 at a dramatically increased 178.42 mph. 60’ launches at full power setting were near the one second mark! The day was getting long but, still energized, Big Daddy took it to the blocks and backed the record run with yet another; a 7.26 at 184.01, nudging closer yet to magic 200 mph goal mark. Big Daddy and SR-37 "broke out' with some sanctioning bodies limiting their exhibition ET vehicle rules to quicker than a 7.50,

Garlits and SR-37 hit the sandbox on the final run with a late chute deployment. Garlits was safe and SR-37 incurred only modest damage to the underside. SR-37 creator and co-owner Mike Gerry was satisfied with the results. The former NHRA crew chief stated, “The team will do a teardown like any other dragster and check the motors, drivetrain, and safety equipment. We all learned a lot! I think we’ll tinker with the gearing and be looking for more power control to the motors so that we have full current delivery. We hope we can turn it around soon for another test and record attempt. We should get 200 next time out and I think we can break into the sixes.”

Conceived as a day of private testing, the event became one for the history books. It was also a day of significant progress and great learning for the team. The “Quest for 200 MPH on Batteries” will continue and was invigorated by the long-awaited and much-anticipated test. Garlits told observers that the car was a lot of fun, sat firmly, had a solid hit and, and pulled very hard. As for the Quest itself, Big Daddy summed it up, “We didn’t get the 200 but we set a new record. Our 200 is coming up next!

About the “Quest for 200 MPH on Batteries” Dragster:

The Quest Dragster is designed and constructed to be the first battery-electric dragster to exceed 200 mph on a ¼ mile drag strip. The goal is to accomplish this speed mark in 2014 with the legendary “Big Daddy” Don Garlits. 2014 marks the 50th anniversary of Garlits’ historic first official 200 mph pass in 1964. The dragster will be powered by a 1500 kilowatt array of lithium polymer (LiPo) batteries producing an equivalent horsepower rating of over 2000 HP. The Quest dragster has already been launch-tested by “Big Daddy” Don Garlits with early versions of the LiPo battery-power packs and electric motor/controller systems.

Mike Gerry of Las Vegas, NV created the Quest BEV Dragster project. In 2001 Mike produced a custom battery-electric dragster to herald drag racing legend Darrell Gwynn's return to the US Nationals. Mike fabricated the battery dragsters for and promoted the 2011 Darrell Gwynn vs. Don Garlits "Match Races for a Cause” in support of the Darrell Gwynn Foundation and Don Garlits Museum of Drag racing.

About the Don Garlits Museum of Drag Racing:

The Don Garlits Museum of Drag Racing Inc. is a tourist complex in Ocala, FL. It enshrines the history of Don Garlits and his hand-built black “Swamp Rat” dragsters. Car exhibits are combined with period memorabilia, Big Daddy’s numerous racing awards, as well as extensive presentations of the history of the sport of drag racing. The Museum includes a gift shop selling a large selection of Garlits- and drag racing-related books, clothing, models, and videos. http://www.garlits.com/

The Bradenton Motorsports Park facility built in 1974 is known as the winter professional drag racing test strip. This premiere IHRA drag race facility, home of the Snowbird Nationals, is renowned for its record-breaking track surface and beautiful nearby Gulf beaches www.bradentonmotorsports.com

Lawless Industries specializes in high efficiency electric drive systems for vehicles of all types as well as the design and manufacture of parade float chassis for internationally prominent theme parks and parade events. Lawless has been the industry leader in specialized float-motion chassis design for over 20 years. Owner Shawn Lawless has adapted their knowledge of EV power drives to the very specialized world of high performance and custom battery-electric vehicles, developing the record-setting Lawless Electric Rocket drag bike and numerous other designs. Lawless-powered vehicles have appeared on episodes of American Chopper and Top Gear. http://www.paradefloats.com/