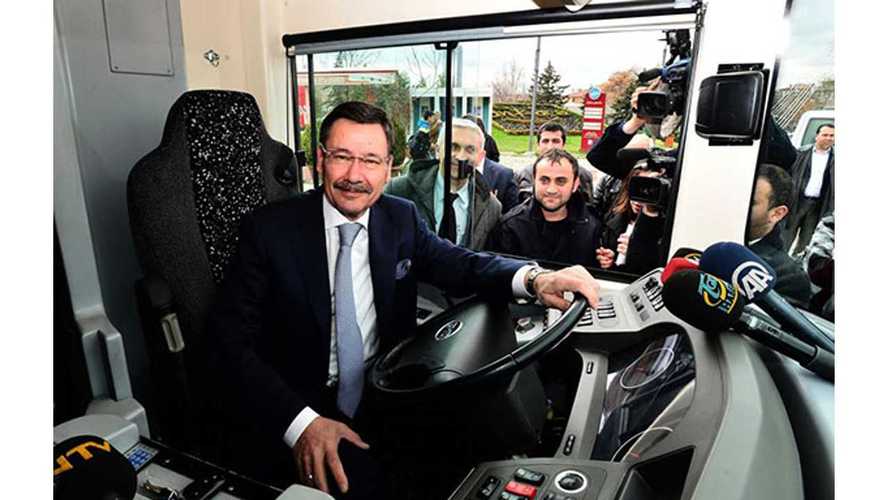 The capital of Turkey, Ankara is the latest stop on the BYD route to demonstrate electric buses to the whole world.  As of now, over 25 cities in Europe have evaluated the bus in revenue service.

The trial in Ankara will be slightly longer than usual and will take one month.

"Ankara City already has one of the greenest fleets in the world with ~1,300 natural-gas-powered buses. This first electric powered bus will be in service between Kuğulu Park and Altınpark for one month. If the bus is also approved by the public after the testing period we will put out a tender and buy electric buses to be used in capital city's transportation system."

"Electric buses do not harm the environment. One bus reduces the equivalent carbon-dioxide consumption of 5,200 trees per year. The battery can be charged in three to five hours and will save a net total of 170,000 Turkish Liras (€54,500) annually."

So now everything is in the hands of BYD. If the Chinese manufacturer prove the performance of the electric bus, then the city will put out a tender.  Other contenders probably didn't meet expectations, especially in terms of price:

"We are going to try it out for one month and observe its efficiency. When we tried another electric bus two years ago the price was €800,000. The latest conventional buses we have purchased were €285,000. These electric buses are €400.000. With some bargaining we would definitely like to open tenders for electric buses".

In the meantime, BYD will display its full line of battery electric buses at the coming BusWorld Turkey in May in Istanbul. And yes, has not only the 12 meter version, but several other like a 7 meter, 18 meter and even a double-decker electric model.