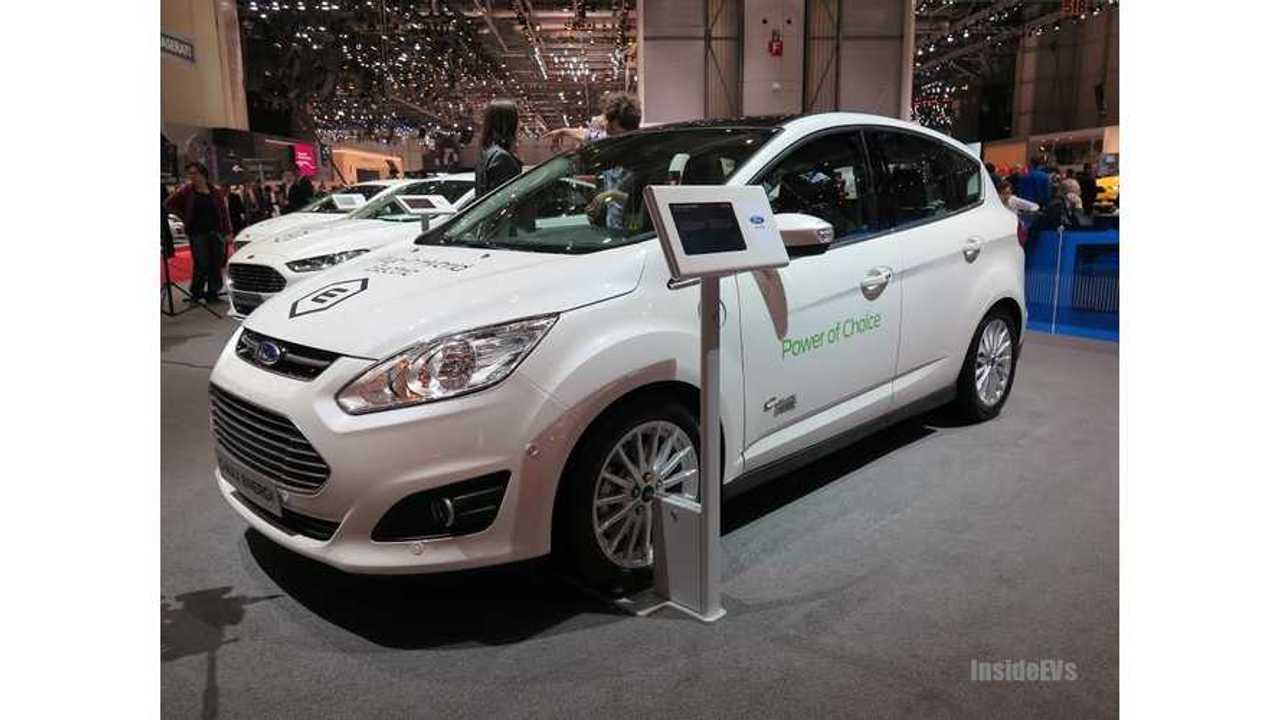 We've often heard stories about the Chevy Volt losing money for GM. And while we don't know for sure it is losing money, Dan Akerson did state at one point:

By Leveraging The Chevy Volt's Platform GM Is Certainly Making Money On The $75,000 Cadillac ELR (show here at the 2014 Geneva Motor Show)

So at best, they are breaking even on the current generation of the Volt. Some might ask if the Volt is profitable from a standpoint that it costs less to manufacture than they sell it for. Again, I'm going to assume no profit is being made here either, simply because GM doesn't show much interest in trying to sell more of them. Selling more would help cover that $1.2 Billion development budget for the Volt, if it were profitable. (disclosure: I own a Volt, and love it... not trying to bash it)

But what about Ford and their C-Max Energi and Fusion Energi cars? I began to think about this and come up with some math, much of it guesses. Apparently it can cost anywhere from $250 million up to billions of dollars to develop a new car.

So lets take the C-Max for a test-case. Ford appears to be selling around 40,000 C-Max cars per year at the current rate. The C-Max, being a hybrid, I'm going to guess at least $500 Million to develop. If they sell the car for 5 years they will have sold 200,000 of them. If you do the math, then they must need to include $2,500 of development cost into each unit sold. This is probably a pretty high number compared to the Fusion, which sells quite a bit more units. However, it looks fantastic compared to the Chevy Volt, which would need $12,000 per unit at its current sales volume to recoup development costs (assuming it were making any money at all).

Ford Probably Needs To Recoup About $2,500 Per C-Max Hybrid To Cover Development Costs

Still. I'm going to make an assumption that the C-Max Hybrid is profitable for Ford, since they do actually seem to want to sell the car.

So, what about the C-Max Energi? This is where things get really interesting. Since the Energi shares the same body, same drive-train, same everything... The only development costs that would go into the Energi car above and beyond the regular C-Max hybrid would be for the new battery pack, charger, and the charge port on the side of the car. So we can assume development cost for this car is much lower than something like the Volt or Leaf. Oh and whatever the development cost is, you can divide that by two since the same system is shared with the Fusion Energi (and soon to be shared with some other Energi cars)

What about production costs? Well, much of the same applies.

The C-Max already benefits from economies of scale since it is a mass produced car. Very little is changed for the production of the Energi model and it gets assembled on the same assembly line.

The battery costs a bit more, but probably not as much as you might think. They are already using a 1.4 kWh lithium battery pack in the regular hybrid model. The Energi has a 7.6 kWh battery pack. I'm going to assume $400 per kwh (installed) at this point, which would mean the battery pack in the Energi model probably costs around $2,480 more than the regular hybrid. And that is a generous number because the cells in the standard hybrid probably cost more than $400 per Kwh since they have to be higher power density to handle hybrid operation. As for the charger and charge-port door, let be generous and say the whole car probably costs around $3,000 more to build than a regular C-Max Hybrid.

Lets look at the MSRP:

The best comparison would be to the SEL model since most of the optional equipment is the same. The Energi model is $4,465 more expensive than the SEL, not too far away from my cost difference estimate. But keep in mind that most of the extra equipment car manufacturers sell you on is very profitable, hence why they like selling the higher trim levels. So we can assume the SEL is more profitable than the SE model already.

Oh.. And don't forget CARB credits in those states that do that. This probably saves Ford another thousand or two in CARB credits for every plug-in they sell. (I don't think anyone knows what an actual CARB credit is worth these days, I'm guessing)

So what is my conclusion? Well, assuming the C-Max hybrid is profitable to Ford, and there's every indication that it is, then the Energi version must also be profitable.  So, why was General Motors not able to do this? Well, one simple reason is that they didn't have any capable, high volume hybrids to begin with.

Most of the hybrids GM has produced (E-assist, BAS hybrids) have been too weak to support driving the car on electric power alone. And any that were (2-mode hybrid) were not being used in any meaningful quantity or in vehicles suited to the size and cost of battery pack they would want to use. So they had to start from scratch. While that strategy did produce a superior car with no compromised trunk space and a great all-electric range, it isn't making any money for them.

I'd also like to point out something else, in case it wasn't obvious. There is $4,465 difference in the MSRP of the C-Max Energi, right? Well, the federal tax credit for the Energi works out to around $4,000 also. Which means there is really no reason any person who doesn't absolutely need the full trunk space should ever buy the regular C-Max Hybrid SEL.

I have heard that Ford is being somewhat generous lately, marking down the Energi cars thousands below MSRP to sell more. However, I do not know whether this affects profitability because I do not know if they are offering similar discounts on the regular non-energi cars, and I don't know for sure how much the CARB credits are.

So what about the Ford Dealers? We all know dealers don't like all-electric cars because they don't require oil-changes and the like. But The Energi cars should not have that problem. In fact, they should be no more difficult to sell than a regular gas car. They don't even have to charge them up if they don't want to.

But why is it important? Why should the consumer care if the car is profitable to the manufacturer or the dealer?

Well, in some cases it doesn't matter as long as the customer likes their car and it is reliable, and came at a price they like. But for the long-term it is important that these cars make money for the people involved in making and selling them, otherwise they have no incentive to sell more of them, or innovate to make them better, or make sure that they are reliable and give a good message to the world.

For example, if a manufacture is being forced to make cars that don't make money, they might not care if the car is unreliable. If that sends the message for customers to stay away from the car, all the better because they never wanted to sell them to begin with.