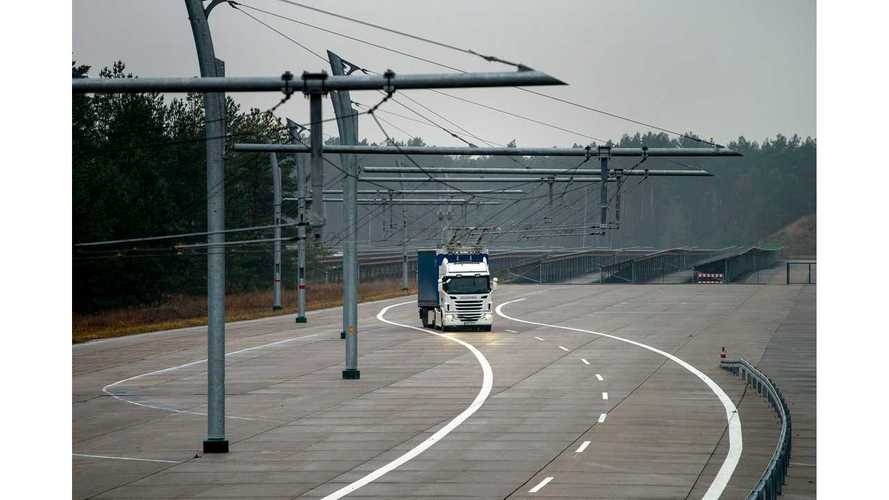 This Scania truck is presently being used to test wireless inductive electric charging from roads.

Scania is testing two different charging concepts to electrify its trucks at some point in the future.

Both vehicles have a hybrid powertrain and probably just a small battery pack so that it's able to drive last small section of a trip without infrastructure support.

"Obtaining electric power from the roadway for vehicle operations offers promising opportunities. A future system of electrified roads has a number of advantages: there is less environmental impact from operation of vehicles, electrified powertrains are more efficient than ordinary internal combustion engines and power can be supplied to the vehicles without needing to use heavy batteries."

“Transport plays a vital role in society, moving goods and providing mobility for people. Our sector creates opportunities for wealth and development worldwide. Now our industry’s challenge is to deliver that value sustainably – above all by decoupling transport growth from CO2 emissions.”

“I am convinced that all of our vehicles in the future will more or less use electricity. When it becomes sufficiently profitable for our customers, we will be ready to launch vehicles commercially.”

“We are now finding opportunities to utilise electricity in many different applications. This will be based on brake energy recovery and energy storage. What is pneumatic or hydraulic power today can be electric. We will not be direct dependent on the internal combustion engine running for several critical systems and components.”

As it turns out, Scania has been researching vehicle hybridization and electrification since the 1980s. Currently, it seems that Siemens's eHighway concept, which is testing on Siemens’s two-kilometer track in Gross Dölln outside Berlin, is a little bit closer to commercialization and Scania hopes to use it in Sweden.

"In conductivity, Scania and Siemens are operating trials with electrically powered trucks equipped with a pantograph power collector mounted on the frame behind the cab. The truck receives power from overhead lines similar to trains and trams. With this collaboration, Sweden may become the world's first country with electrified trucks and roads for commercial use."

The test truck has been equipped with a 2x1-metre electric power pickup under the truck, a large power collector that receives electric energy.

In parallel, Scania is testing (in Germany) Bombardier's wireless charging system from roads.

"The test truck has been equipped with a 2x1-metre electric power pickup under the truck, a large power collector that receives electric energy. Approximately 200 kW power is transferred across an air gap of up to 100 mm between the road and truck. In initial tests, Scania primarily seeks to determine the amount of energy losses and how they vary according the vehicle’s position and distance to the road surface. What is the greatest possible distance between the road and pickup and how much can the vehicle deviate from the road centre without incurring energy losses?"

Scania is now preparing to start full-scale demonstrations on select electrified roads in Sweden where major tender is under way for such a system. Next year, there will be some electrified segments of public roads for us by trucks or buses.

"In Södertälje, 35 kilometres south of Stockholm, where Scania has its Head Office as well as its R&D centre and production facilities, Scania hopes to electrify a major bus route. Five segments totalling 200 metres will be electrified, allowing buses to charge batteries until till next electrified segment."

The other application for electric roads is in mining where trucks have a fixed route from mine to processing plants and Scania is considering electrifying such routes in Sweden.

"The Swedish Transport Administration, the Swedish Governmental Agency for Innovation Systems and the Swedish Energy Agency will provide public funding for these demonstration projects. They have stated that electrified roads can address the growing demand for transport by reducing energy use and the carbon footprint at a reasonable cost in the near future."