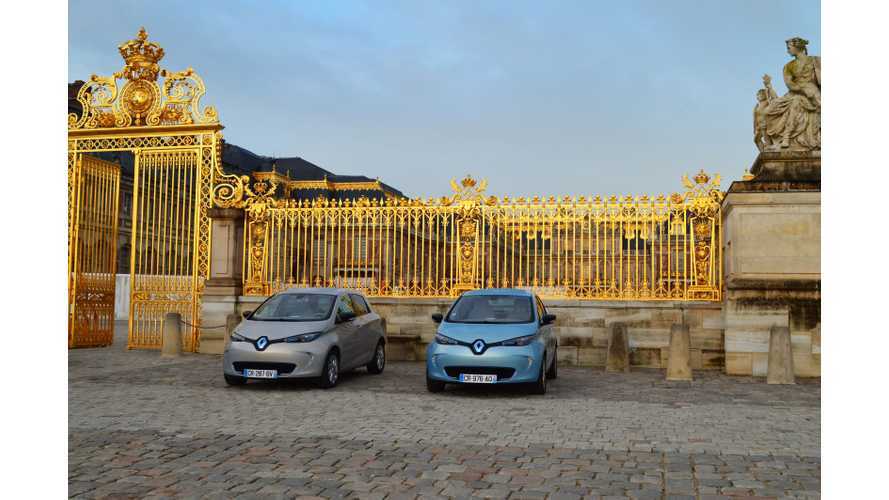 Renault ZOE celebrating with colleagues in Palace of Versailles

Sales of the Renault ZOE launched in France in December 2012, but volume deliveries didn't arrive around until March 2013.

Now, it's January of 2014 and we see the ZOE is celebrating its one-year birthday at the Château de Versailles:

"One year after its launch in December 2012, ZOE blew out its first candle at the Château de Versailles, Renault’s partner location. More than forty lucky owners will gather in the low gallery at Versailles, to talk about their experience with ZOE and conduct a first appraisal."

A royal birthday for ZOE

Renault boasts ZOE achieving the best supermini title from Euro NCAP and 10,000 units sold to date. 10,000 probably includes the 1,000 or so that sold this month.

98% of ZOE owners are satisfied and 97% would recommend it:

"ZOE drivers are its best spokespeople. For this first anniversary, Renault received a huge and enthusiastic response when it invited owners to come and talk about their car and their experience with ZOE. Many believe that simply test driving an electric car is enough to make anybody want one: 98% of ZOE owners are satisfied and 97% would recommend it. Alongside driving pleasure, customers appreciate the comfort offered by ZOE: no noise, no vibrations and smooth acceleration (no gear shift)."