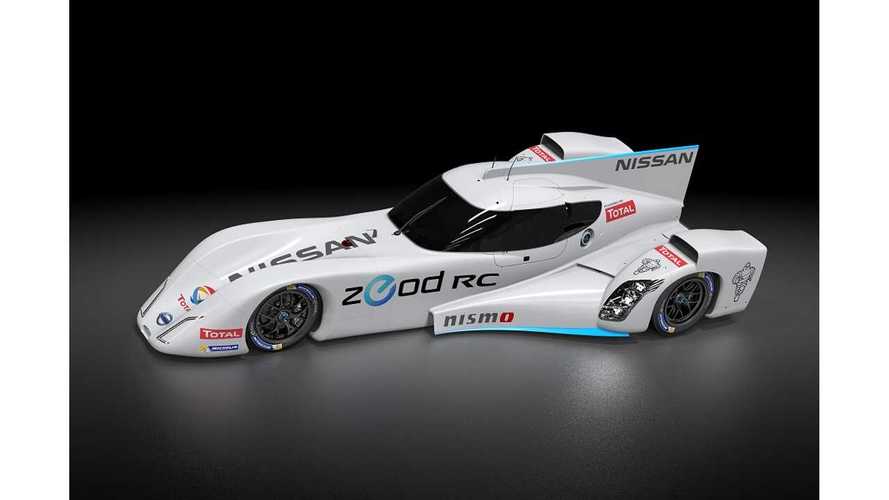 Later this year in June, Nissan plans to take its ZEOD RC to Le Mans.  And as part of that, race the company says it will be "the first entry at Le Mans to complete a lap of the Circuit de la Sarthe under nothing but electric power."

But what happens after that is fairly impressive too, as Nissan's new DIG-T R 1.5 litre three-cylinder turbo engine picks up the extended range duties.  (You can find some nifty 360 degree imaging of the engine here)

What makes this engine special?  Two numbers jump out at us:

"The incredibly small engine weighs only 40 kilograms (88 pounds) but produces an astonishing 400hp. The base engine is only 500mm tall x 400mm long x 200mm wide (19.68" x 15.74" x 7.78"). While the engine is technically too heavy to take as carry-on luggage on a plane - it would easily fit inside the luggage guides seen at major airports around the world."

Nissan also says that the engine puts out  380Nm of torque, meaning that per kg their engine has a "better power-to-weight ratio than the new engines to be used in the FIA Formula 1 World Championship this year."

"Our engine team has done a truly remarkable job with the internal combustion engine," said Darren Cox, Nissan's Global Motorsport Director.  "We knew the electric component of the Nissan ZEOD RC was certainly going to turn heads at Le Mans but our combined zero emission on-demand electric/petrol power plant is quite a stunning piece of engineering."

Nissan adds that the ZEOD RC will undergo an extensive test program over the next four months ahead of its race debut at this year's Le Mans 24 Hours on June 14-15.