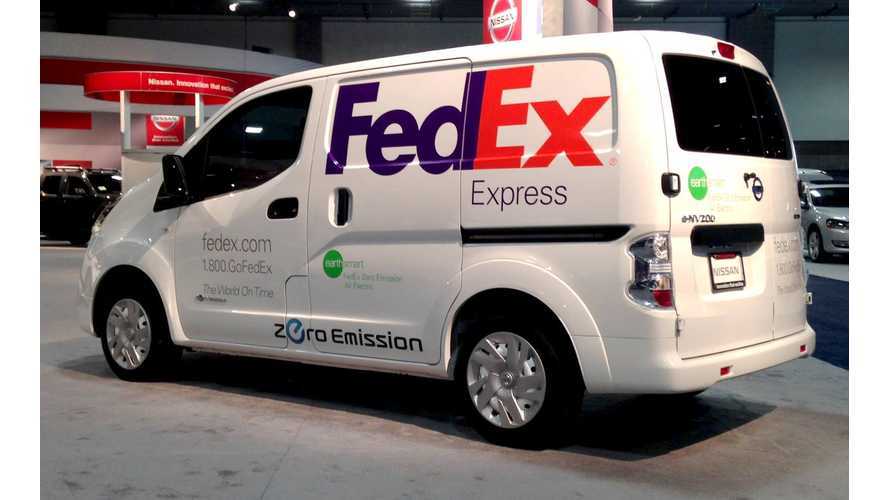 Nissan has announced that they are bringing their all electric e-NV200 to the United States for testing for the very first time.

And before we get into all the corporate verbage about this fleet trial, we would like a moment to speak directly to anyone from Nissan who happens to be reading this:

We don't need anymore global testing of this platform, just start shipping them already!    Sidenote while we are at it: We are good for small, limited range passenger EVs!

Nissan says that it will be working with FedEx Express to test out the e-NV200 under "real world conditions" in Washington D.C.  As for deployment, FedEx says it will be rotating Nissan's electric van (which is based on the LEAF) into its delivery fleet as part of their "EarthSmart" program.

"FedEx will deploy the Nissan e-NV200 in the Washington, D.C. area, where it will undergo field tests that subject it to the routine requirements of a delivery vehicle. The results will be used to help determine the viability of using an electric vehicle in this role in the U.S. Nissan e-NV200 is scheduled to begin mass production later this year in Europe."

The e-NV200 will begin production at Nissan's Barcelona, Spain plant over the summer with first deliveries happening in Japan this year, then the UK shortly thereafter.

"We're eager to work with FedEx and other companies to put the e-NV200 through its paces to continue to build awareness of the capability of electric vehicles and to evaluate how well it meets the needs of the commercial consumer," said Erik Gottfried, Nissan director of Electric Vehicle Sales and Marketing. "We'd also like to explore clever uses of EVs in work environments where carbon emissions of gas-powered vehicles make them impractical or impossible to use."

Current e-NV200's are based on the first generation LEAF platform and are reported to have an all electric range of about 70 miles.  Additionally, all the test vehicles are equipped with DC fast charging, giving the e-NV200 the ability to get an 80% charge in less than 30 minutes.

Nissan has committed to marketing the van globally, but deliveries to the United States are not expect until early next year.  Separately, Nissan is currently testing 28 e-NV200s in the UK with British Gas (video of that trial below).