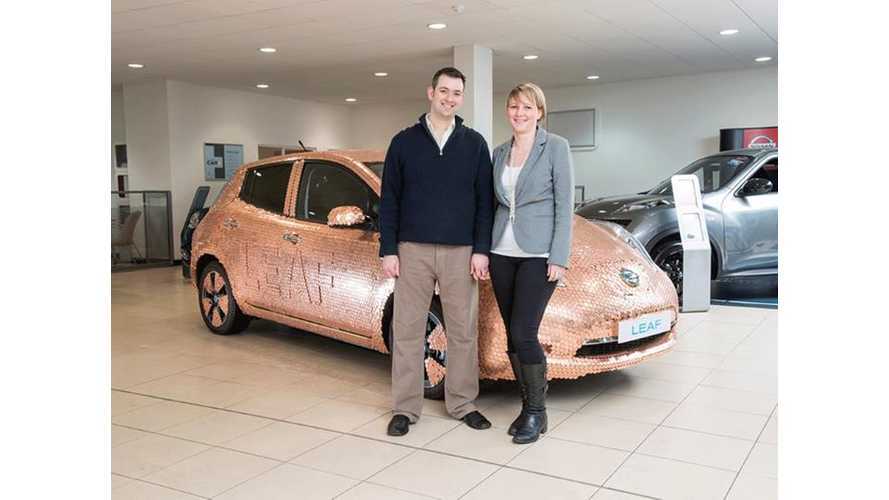 Yesterday Nissan announced they had sold the 99,999 Nissan LEAF to a lady located in the United States;  and while we thought it odd at the time to promote this number and not the magic 100,000, we had a feeling another press release from another part of the world would be coming soon thereafter.

And No, They Didn't "Really" Stick A 1,000lbs Of Coinage To The Dentist's New Ride - Here Is The Real Thing

And sure enough, Nissan did not disappoint as they announced today that the 100,000th customer was a British dentist.

"YOKOHAMA, Japan (January 20, 2014) – The 100,000th all-electric Nissan LEAF is being bought by a customer in the United Kingdom. The Nissan LEAF, the world's first mass-produced zero emissions vehicle, remains the best-selling EV in history with a 45% market share."

The 99,999th Nissan LEAF Was Reportedly Sold In The US On Sunday

Interesting to note is Nissan says they have a 45% historical worldwide market share on selling pure EVs, when yesterdays press release quoted 48% - but we won't quibble over a few percentage points.

As for why the 100,000th LEAF customer chose the LEAF, Dr. Brett Garner, explains:

“I have chosen my Nissan LEAF because I am very interested in its running costs," Dr. Garner said. “The cost of ownership such as maintenance, insurance and charging also convinced my wife.  She had the experience of driving 500 miles in a borrowed LEAF and the low cost was remarkable. So she was converted and insisted that we had a LEAF."

If interested, the press release can be found below:

Since its launch in December 2010 Nissan has seen the pace of sales increase consistently and 2013 was a record year. The LEAF is now available to customers in 35 countries on four continents.  In Norway, the Nissan LEAF topped sales charts, out-selling conventional gasoline powered vehicles in October 2013.

The 100,000th Nissan LEAF customer is Dr. Brett Garner, the owner of a dental practice in Fareham in the UK...As a father of three, Dr. Garner says the car is convenient and comfortable for his family.

“The Nissan LEAF is perfect for everyday commuting, and there is no problem with charging it. It is ideal for the family as it is quiet and not tiring even on longer journeys, because there is no vibration. Above all, it is a fun to drive car!"

One of the first Nissan LEAF customers was Mr. Wasei Hirai, the Buddhist priest.

“It is profound that Nissan LEAF sales have reached 100,000 units," he said at his temple in Tokyo in Japan. “Natural beauty and history are very important for me, but I often drive a car because it is necessary for life. That is why I have chosen 100% zero emission Nissan LEAF.  The Nissan LEAF driven by electricity produces zero emissions, no sound, and no vibration.  That new type of driving car attracted me."

“Surprisingly, the innovative aspect of the Nissan LEAF matches this old temple quite naturally," he continues.  “So, I believe that such a temple should take the initiative to propose messages about the environment and a way of living.  I think the day will come that whenever people think of a car, it will be an electric car."

Nissan developed the Nissan LEAF to realize its corporate vision of Zero Emissions, new forms of mobility that are safe, fun and environmentally friendly. Nissan's research into on-board lithium-ion battery technology began in 1992. The Nissan LEAF offers powerful acceleration, quiet operation, energy efficiency and low cost of maintenance. Nissan has extended the standard warranty for the battery-power holding capacity with its own additional warranty for customer satisfaction and assurance.

Nissan is continuing to innovate in electric vehicles and is determined to maintain its dominant leadership position in the market. The company is working with governments and corporations to further expand the infrastructure of charging stations to encourage the take-up of EVs.  Nissan believes that now with over 100,000 Nissan LEAF EVs on the road throughout the world, it has access to invaluable market experience that can be utilized to further promote and enhance the future of EVs.

After leading the era of electrification in passenger vehicles with the LEAF, Nissan will in 2014 bring an all-electric light commercial vehicle to market. The e-NV200 will go on sale in Europe and Japan bringing the benefits of quiet, cost-efficient, zero-emissions mobility to businesses.

In June 2014, Nissan will participate in the 24 Hours of Le Mans with the NISSAN ZEOD RC and aims to set a record for the fastest all-electric, zero-emissions lap of the circuit. Nissan is committed to using the EV platform to break new ground in both the commercial-vehicle and motorsports arenas.