Tesla Model S: Are They More Cost-Effective Than You Think? 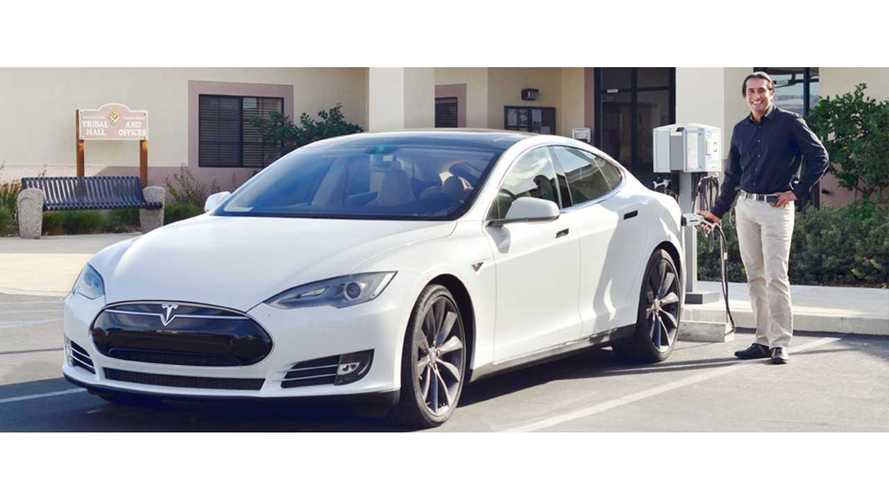 Kenneth Kahn weekly crisscrosses the back roads and freeways of San Luis Obispo, Santa Barbara, and Ventura Counties in his job with the tribal government of the Santa Ynez Band of Chumash Indians. Add these trips to his personal excursions, and Kenneth can drive between 24,000 and 30,000 miles in a year, nearly double the amount of the average driver, according to the Department of Transportation.

Such heavy vehicle use — and gas —has consequences, as Kenneth realized. His mounting gas bill coupled with a growing realization of the repercussions of his CO2 emissions on the planet’s climate convinced him to look at purchasing an electric vehicle. Then, when an EV charging station was installed outside his office building, he took it as a sign.

Transitioning to an EV, however, wasn’t without its bumps.

Kenneth is a self-proclaimed “adventure guy.” He’s an avid cyclist and has always owned either a truck or SUV to haul his bike around. He knew that any new car was going to need to have the space for his bike, without making him break it down into myriad pieces.

And like most people considering EVs, he had doubts about their range. Some days he drove over 100 miles a day for his job, and he wanted to have confidence that the EV he purchased wasn’t going to leave him stranded on the side of Highway 101.

So, he set to work, researching and test driving the Prius Plug-in, the Toyota RAV4 EV, and the Chevy Volt. None of them fit what he wanted in terms of a fully electric car with a shorter charge time and a longer range. Then, Kenneth saw a brochure advertising the Tesla Model S that showed a fully-assembled bicycle stored in the rear cargo area and touting a range of 265 miles. He was intrigued, until he saw the car’s sticker price: approximately $100,000 for the performance model he was eyeing.

“I told my friends there was no way I was going to spend that much money on a car,” he remembers.

Still, to sate his curiosity, he decided to do a cost analysis, comparing the Tesla to his then-owned SUV. He discovered that calculating out to 100,000 miles (what he considered the average lifespan of a car) he would pay 3 cents per mile for electricity for the Tesla. At the time, he was paying 33 cents per mile for gasoline his SUV. The fuel savings alone penciled out to $30,000 over the life of the car.

He also determined that for the same mileage period he’d save $10,000 in maintenance fees with the Tesla, which requires no oil changes or smog checks, and has fewer moving parts to maintain. The car has no carburetor, fuel injection, gas tank, cooling system, or spark plugs. Plus, its use of regenerative braking means that its brake pads can last up to three to four times as long as a normal car’s.

"...there was no way I was going to spend that much money on a car"

Coupled with the $10,000 value of incentives available for EV purchases ($7,500 for the federal tax credit and $2,500 rebate for the state) Kenneth realized, to his amazement, that he’d just knocked the price of the luxury electric vehicle in half.

Kenneth had figured out the not-so-secret secret of the new Tesla models: pay for your fuel efficiency upfront and save more money in the long run. With his calculations in mind, he made the leap and purchased his white Tesla Model S Performance 85.

Now, even driving to work is an adventure. “The get-up-and-go on it is no comparison. It’s just an instant response. It’s certainly the fastest thing I’ve ever owned,” he says with an excited chuckle. And his sixteen-year-old son, who has been allowed to practice his driving in it, “thinks it’s the coolest thing in the world.”

He typically charges his Model S at the new charging station outside the Chumash tribal hall building and occasionally at the free Tesla supercharger stations in Buellton and Atascadero. These special stations are part of a larger network of fast charging stations that can add up to 170 miles to the car’s range in only 30 minutes. Although Kenneth rarely charges his EV at home, he noted that if he did fully charge it up from a dead battery, it would cost him about $6 on his electric bill to do so. His average individual gas bill with his SUV was around $80.

Kenneth has had his car for four months, and he already has close to 8,000 miles on it. So far, he says, he’s “well over 100% satisfied with car.” If you press him, however, he will confess a few minor shortcomings. For one, the aftermarket roof rack he installed (for transporting his mountain bike and snowboarding gear) is bulky enough that it reduces the car’s efficiency somewhat. But racks of any size can significantly affect the efficiency of most cars, and Kenneth points to the relative newness of the car to the market and asserts that the diversity of such accessories is bound to improve over time.

His only other concern?

“The car has a lot of power, and even though I’m not a crazy driver, I’m worried about the wear on the expensive performance tires.” After a gathered pause he adds, “But it’s worth it. It’s a whole different experience. I feel like a new car owner every day I wake up and look out the window and see it. Plus, there’s that feeling of satisfaction I get every time I drive by a gas station where I’m proud that I’ve lightened my footprint a bit."

Our thanks to Emily DeMarco at the CEC (Community Environmental Council for this piece), as well as a hat tip to Michael Chiacos.