BMW i3 - Owner Review From Norway 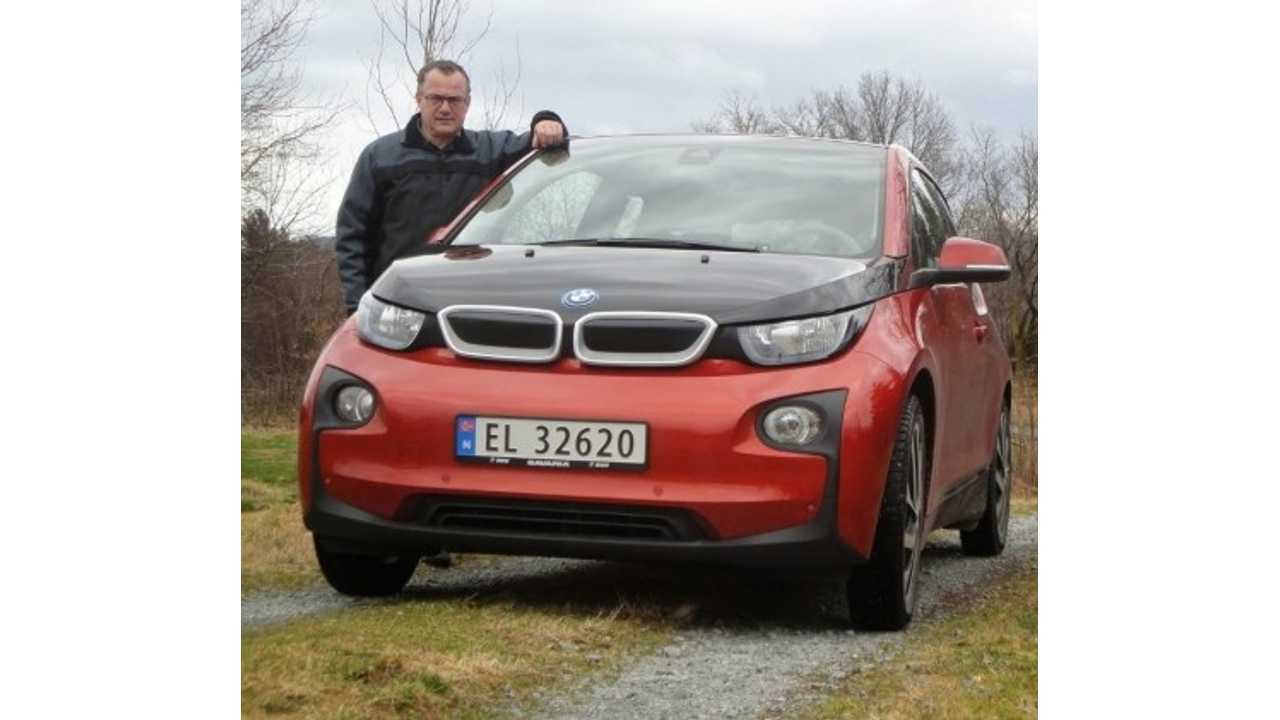 As Tom Moloughney writes on his “The Electric BMW i3″ blog:

“A while ago I announced that I would be starting a new series here called, “I was Born Electric on…”. I’ll be featuring readers who are i3 owners and who are willing to share their thoughts on the car after taking possession. Without further ado, I bring you Jon from Norway and his Sonic Orange i3 BEV"

*The words below are those of Born Electric i3 owner Jon from Norway:

Hello, I'm Jon from Norway and I was Born Electric on February 13th.

Until now I’ve been "partly electric" by cycling once a week (not in winter) to work with an electric bike. It's 17km each way and I've done 1000km in total. Living in the southwest of Norway, in Sandnes and working in Stavanger, nearby.

I first started looking for a hybrid vehicle that could go electric to and from work. Toyota and Lexus could just go a few kilometers in electric mode which wasn't enough for me. Then Volvo came up with one, but it was too expensive. The i3 was the first all-electric that I found interesting.

In the past two years the most we have driven at any time was about 100km. If we need to travel longer than that, we go by air. After reading just about everything I could find about the i3, I decided to sign an informal agreement to buy one on July 11.

Since then, Audi and VW have announced a few interesting hybrids, but the Norwegian tax system gives the all-electric cars some advantages (at the moment). That meant the all electric BMW i3 is actually less expensive then the competing hybrids, plus it gets toll free passage and is free on ferries!

In October, BMW put an i3 in front of the Oslo Marathon to serve as a pace car. The BMW shop Bavaria in Stavanger lent it for a day and had it on exibition in town. I went there, took a glance, and felt in love. Unfortunately the salespersons knew even less than I did (Hi Tom, It’s the same mess in Norway!), so I spoke with two engineers that came to look at the charging system. Together, we agreed that BMW needs another type of way to sell these electric cars. Specialists that have been properly trained for these unique vehicles.

My experience earlier was that coming in to the BMW car shop speaking Oslo dialect got them to believe that I worked with Statoil and was looking for an expensive model. The salespersons focus on status models with big engines is not suitable for electric cars! These cars are different and the sales processes should be different as well. When i3 was introduced in November, I took it for a spin and was convinced. I was about the 50th person to sign a contract out of the 550 in total in the southwest of Norway. After seven long months of waiting, I finally have it!

It is a pleasure to drive! It is fast when you need it, yet with smooth and easy ride. Small and quick in town and with an impressive turning radius! Many Norwegian families have two cars because both parents use a car to come to work and the i3 can be a perfect second car for many of them. Quite often they will have a large car to go to their cottage in weekends. However from now on, the second should be all-electric like the i3! Moreover, for some of us it is the primary car, the one that gets the most use.

The one foot driving is perfect! In the morning rush, I used to step on the brake pedal hundreds of times to avoid crashing. Now I just regulate the speed by the accelerator pedal. Even better, I go into the line of cars on the motorway and turn on the adaptive Cruise control. It's possible for me to travel the whole 15 km on the motorway just steering, not touching the any pedals!

I have a very good second car, a Saab 9.3 automatic, but I will now use it only if we decide to go by car to Oslo (500km, We have only Japanese fast charging system here now) or if I need to fetch something with a trailer. Last week we went to visit some relatives in the Archipelago north of Stavanger. The car did fine on the 80km drive, even with 5 degrees Celsius and strong winds. I was worried about the distance and how much air conditioning (heating) I could use, but was relieved when the car showed 55km to go after driving the 80km. Since the i3 is a tall car, strong winds do affect the steering more than I am used to, but it is not a big deal once you get used to it.

As a city car, I believe the best choice for the i3 is the all-electric car version now. Agile, quick and fun to drive. I like the narrow tires because they will not float in snow and they will not follow tracks in the asphalt. Norwegian roads have often tracks from cars with studded tires. The i3 REx would definitely make my range anxiety disappear, but here in Norway, it is too expensive because of the special tax system.

To have the newest in security, you must add much of the extras BMW provide! I paid 36% extra to get the essentials! (Tyre Pressure Monitor is free). I believe i3 is the only all-electric car with adaptive Cruise Control. That is a great, but soon the electric VW Golf comes with it as a standard feature! Relative to the range anxiety, both Audi A3 and VW Golf comes with 204hk hybrid cars that uses 0,15l/10km! If BMW does not come up with wider range of electric cars, or hybrid 4x4, then VW-Audi will achieve their European goal, being the leading automaker here, also in electric and hybrid cars.

As for the sound system, the car is a virtual concert hall with the Harman Kardon loudspeakers. I have a lot of music stored on the hard disk in the car. To listen to quiet parts of classical music without disturbance from the petrol motor is perfect. The extras are from the ordinary BMWs, and suits the i3 well. To give i3 the right premium feel along with the rest of the BMWs, I think you need optional equipment like adaptive Cruise Control, stop and go and Harman Kardon loudspeakers. However, as said before, these features do cost a lot! In Norway the base i3, the Leaf and Golf cost about the same without optional equipment. For me, i3 wins even though you do not buy optional equipment.

Two practical things about the i3 that I'd like to recommend: Floor mats in white velor are nice to look at, but not to use in winter. Also do not put the electric cables under the bonnet. The wet environment might damage it, they said. Therefore, I recommend using a waterproof bag for them like I do.