London Mayor: All Taxis Will Have to be Zero Emissions Capable by 2018 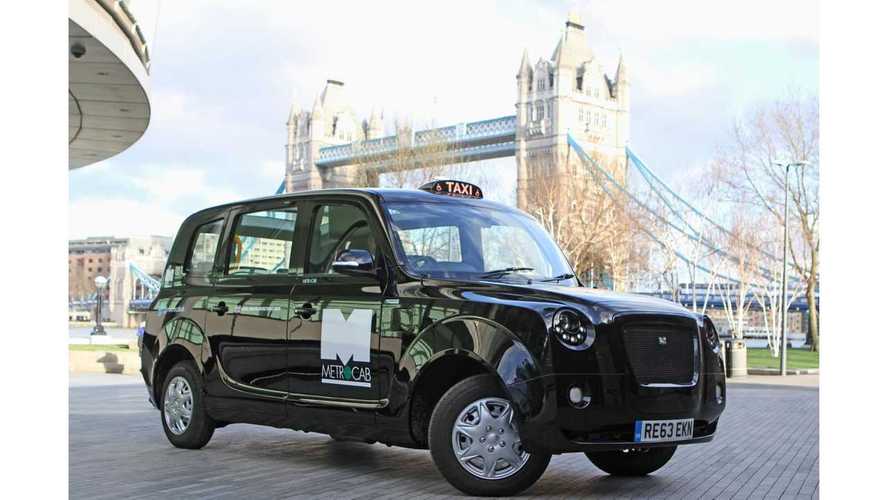 Recently, there seems to be not a day without news on electric taxis in London.

Manufacturers are now sharpening their teeth to win some orders for electric or plug-in hybrid taxis as London's Mayor, Boris Johnson, announced a plan that would require all new taxis presented for licensing in the capital to be zero-emissions capable from 1 January 2018.

The word "capable" means that there is no rush to bring fully-electric ones. It will be enough if new taxis will shut-down the engine in the city center automatically (series hybrid vehicles). By the way, this is how the recently presented Metrocab could work with its tiny 12.2 kWh battery pack.

"The Mayor of London, Boris Johnson, today (Thursday 16 January) announced plans that would require all new taxis presented for licensing in the capital to be zero emission capable from 1 January 2018, with the expectation that they will automatically operate in zero emission mode while in areas where the capital's air quality is at its worst such as parts of central London."

"The London taxi is iconic in so many ways - not least in terms of its eye-catching looks and the way it is piloted by wily experts who know the capital like the back of their hand."

"To date its one Achilles heel, particularly of older models, has been the pollution generated by chugging diesel engines."

"As part of my mission to improve our air quality and drive innovation, I'm making a firm pledge to Londoners that from 2018 all taxis presented for licensing should be zero emission capable."

"The cleaner, greener vehicles I've seen today are proof that the evolution of the great London cab is well and truly underway."

"We will continue to work closely with taxi manufacturers to get 'New Taxis for London' carrying passengers on the streets of the capital as soon as possible.  The manufacturers at this event today are clearly well advanced in delivering the next generation of green taxi."

"We believe these vehicles will be available well in advance of the challenging deadline set today by the Mayor."

"We are also working with the wider industry and the Green Investment Bank to provide assistance to cab drivers who want to be among the first to get behind the wheel of these cutting edge vehicles that will significantly contribute to improving air quality in the capital as well as delivering benefits to cabbies themselves, in terms of reduced running costs."

London's Mayor previously announced plans to introduce an Ultra Low Emission Zone in central London by 2020.  There's also a goal to increase the number of charging points in the Source London network from less then 1,400 to 6,000 by 2018 and to utilize them for taxis.

According to the press release, black cabs are huge contributors to airborne pollution in the city:

"Currently road transport is responsible for around 80 per cent of airborne pollution in the parts of central London where air quality is the worst, with black cabs contributing to 30 per cent of particulate matter emissions in those areas."