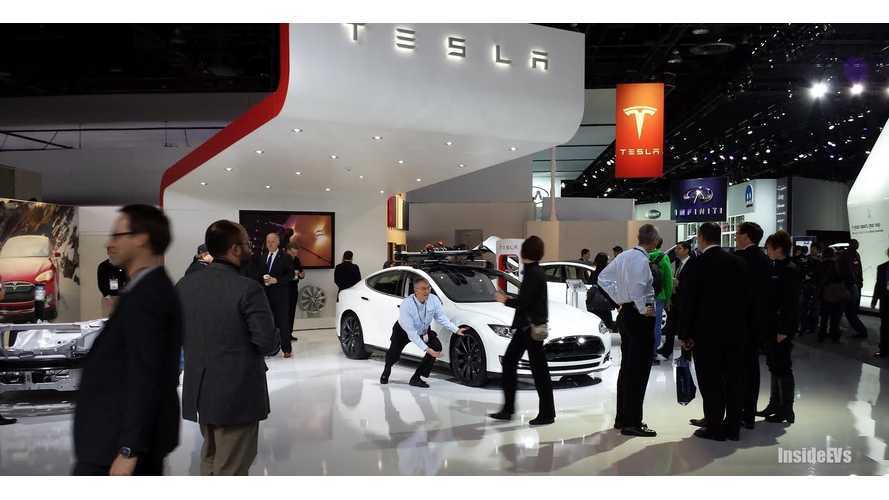 Tesla Motors has accomplished the impossible: a startup automaker gaining recognition and admiration from one of the Big Three.

As the Detroit Free Press put it:

"The emergence of Tesla Motors as America’s fourth domestic automaker — a feat once viewed by the Detroit Three as practically implausible — poses a threat to the industry’s entrenched mind-set."

With the addition of Tesla to the ranks of admired US automaker, we now have the Big Four.

“I really, really believe that the world and the industry and America needs an Elon Musk.  I think it’s really, really healthy. I really admire the man for everything he’s accomplished with Tesla. He’s basically built a brand, which is very hard to do in a very mature industry. So that’s huge.”

It's a changing of the tides.  GM now recognizes the achievements made by Elon Musk and Tesla Motors and commends the automaker for what it has done.

The Detroit Free Press remarked on the frenzy Tesla creates these days:

"With the Detroit auto show upon us, Tesla’s media conference today is no longer optional for auto journalists. It’s mandatory.  Musk himself is not expected to show up. But if he did, you’d see Cobo Center transform into the Detroit Zoo, with media members scrambling to track down the man..."

Tesla's vice president of corporate and business development, Diarmuid O’Connell, is thrilled that Tesla is "gaining respect in the industry," says the Detroit Free Press.

As O'Connell stated “our domestic counterparts who have been notably dismissive of our efforts from the very beginning” are now showing "some evidence" of change in how they view us.

Big Three to become Big Four with the established US automakers (GM, Ford and Chrysler) allowing Tesla to join the ranks?  It could happen, right?