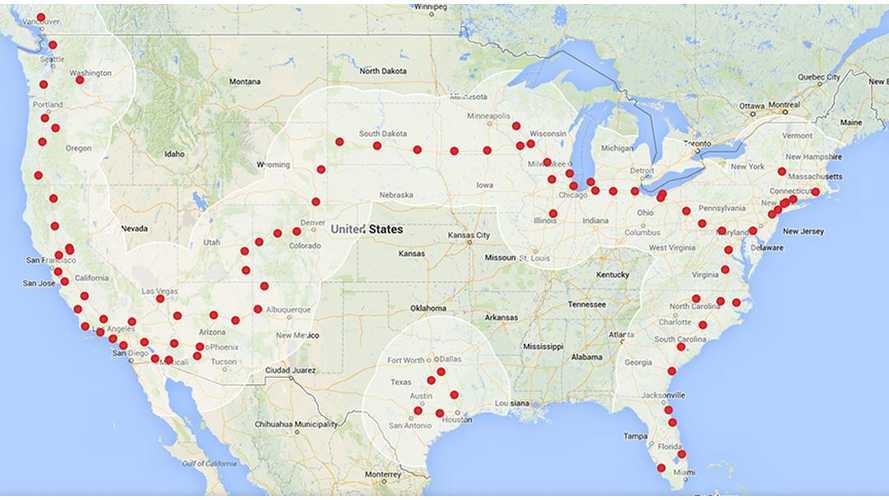 InsideEVs recently reported how Tesla Superchargers are coming online at a rate of nearly 4 per week. Tesla’ currently has 71 US Superchargers online with 22 more sites listed as “coming soon” by Tesla. Of those 22 future stations, we are closely watching the following ten.

These ten Superchargers are marked as under construction and will make history by completing a free coast-to-coast electric highway for Tesla travelers. Technically it probably can be called after Kingman, AZ and Cheyenne, WY. Bottom line, it is getting ready to happen and transportation will never be same.

With Savannah, GA and Lumberton, NC now online, the east coast Tesla electric highway is now possible from Miami to Boston, though some additional chargers are still being added . One can already travel from Seattle to San Diego on the Tesla Supercharger network.

These are major milestones accomplished by a single US auto company, while governments and other established manufactures are yet to produce such a plan. So, how has Tesla funded this network?

Tesla has built $2,000 into the price of each Model S to support the Supercharger network. With the 20,000+ Model S EVs already sold in the US, Tesla currently has forty million dollars allocated to rapidly expand the Super Charging network. For $2,000, each Model S owner has lifelong unlimited access to this growing network.

Try to imagine what it would take to replicate such an offering with gasoline? The genius of the Tesla's Supercharger network was recently voted AOL Autos Technology of the Year Award.

Many who oppose electric vehicles have argued that the source of electricity is dirty due to its dependence on fossil fuels used in generation. For more on environmental issues as they relate to EVs click here.

Tesla’s next move is to begin outfitting the charging network with solar canopies or other solar methods to offset the energy used to power this brave new mode of transportation, which will end the argument of who is winning the zero emissions race.