Green or White? Which HOV Sticker will the BMW i3 Get in California? 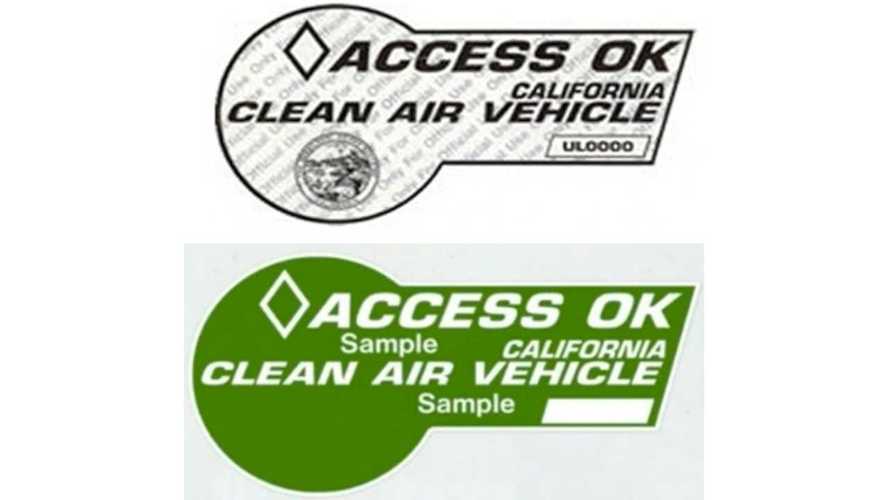 Green or White? Which HOV Sticker will the BMW i3 Get in California?

As trivial as this question might sound, it might have serious consequences for future buyers of the i3. Wait, what I am talking about? As you might have heard already, the range-extended version of the BMW i3, which is slated to arrive in the US sometime in April, is apparently at risk of not qualifying for all the incentives in California, which is the largest market for plug-in vehicles as of this writing.

*Editor's Note: This post originally appeared on George's blog.  We suggest that you check it out by clicking here.

What incentives are those exactly? Well, for one thing, there are the carpool lane stickers, which permit single-occupant vehicles to use HOV lanes. Some people have said that it was "tantamount to having a helicopter for commuters". OK, not quite, but it's still an incredible perk. Then there is the clean vehicle rebate, which allows owners and lessees to apply for a rebate check, if they have either purchased or leased the new vehicle, and commit to keeping it at least 36 months.

That all looks pretty straightforward, wouldn't you agree? I guarantee you that it won't be when we delve into the specifics. The devil is in the details. Literally. Take the carpool lane stickers. They come in several varieties in California:

The yellow stickers were introduced in 2004 by Assembly Bill 2628, which allowed hybrid vehicles, such as the Toyota Prius and Honda Insight, to access HOV lanes. It was limited to 85,000 cars, and the stickers were issued on a first-come first-served basis. This program was extended several times, and the original more limited allocation of stickers has been more than doubled. Although some owners kept them as a souvenir on their cars, the incentive came to an end on June 30, 2011.

The white stickers were established though Assembly Bill 71 in 1999. Eligible vehicles must meet strict emission standards set forth by the California Air Resources Board (CARB). The following categories would qualify: pure battery electric vehicles (BEV), dedicated compressed natural gas (CNG) or hydrogen fuel-cell vehicles (FCV). There is no limit on the number of stickers that can be issued. As of September 1, 2013, the Department of Motor Vehicles (DMV) had issued 32,764 white stickers; the recent run rate has been about 1,500 decals per month. This program was set to expire on January 1, 2015, but has recently been extended until 2019 via Assembly Bill 266.

And finally, there is the green sticker program, which came into life on January 1, 2012. The stickers will be issued to the first 40,000 applicants, who purchase or lease cars meeting California’s Enhanced Advanced Technology Partial Zero Emission Vehicle (Enhanced AT PZEV) or Transitional Zero-Emission Vehicle (TZEV) requirements. Examples of qualifying vehicles include Ford C-Max Energi, Honda Accord Plug-in Hybrid and Chevrolet Volt. As of November 8, 2013, 24,452 green stickers have been issued; the recent run rate has been about 1,000 decals per month. At this pace, the sticker allocation could be exhausted in approximately 14 months. If the program is not extended, the green stickers will expire in 2019, just like the white decals mentioned above.

It's worth noting that the HOV decal program is administered by the California DMV following guidelines set forth by the Air Resources Board, which maintains a comprehensive list of all eligible vehicles. This list does not mention or include the BMW i3 yet. That's understandable, since the first i3 is not supposed to be sold in California until May 2014. While it would seem only natural that the pure electric version will qualify for the white stickers, some thought that the range-extended version would get them too.

What is the big deal then, aren't the stickers interchangeable? At first blush, it would appear so. The green stickers, which the BMW i3 REx trim might end up getting, are limited in number. If BMW and the Air Resources Board cannot come to an agreement on this issue, it could start affecting i3 buyers as soon as late 2014 or early 2015. However, this problem would not be unique to the range-extended variant of the i3; it would affect other vehicles, such as Chevy Volt, Plug In Prius or Ford Fusion Energi, as well.

Additionally, although both sticker types are slated to expire on January 1, 2019, some believe that the white decals had a better shot at getting an extension. All that said, this should be a non-issue for current BMW i3 buyers, so long as the i3 will qualify for some kind of HOV decal. Green or white. It doesn't really matter. Although some might prefer one over the other, the practical difference is likely zero as of this writing. Should the green stickers run out in about a year, and an additional allocation is not approved, then early i3s with REx could have a better resale value. Much like a Prius with the yellow sticker would command a premium in the years past.

That leaves us with the clean vehicle rebate project. This project is a voluntary incentive program introduced in by Assembly Bill 118 in 2007. The program is administered by the Air Resources Board (CARB) to fund clean vehicle and equipment projects. It is managed by the California Center for Sustainable Energy (CCSE) in San Diego, and has expanded its funding considerably over the past few years to keep up with the increased volume of new clean-fuel vehicle registrations.

PHEVs are eligible for up to a $1,500 incentive. To qualify, PHEVs must:

While the pure electric version of the i3 would clearly qualify for the $2,500 incentive as a light-duty ZEV, the range-extended version of the i3 should get $1,500. Right? Well, not quite. The California Air Resources Board has recently established a new category: the range-extended battery electric vehicle (BEVx). It's a new regulatory category initially approved as a zero-emission vehicle type in the clean vehicle rebate project in June 2012. In the current fiscal year, the BEVx continues to be an approved eligible vehicle category.

Decisions Get Made Here

How does a plugin vehicle get classified as a BEVx? According to the 2012 amendments to zero vehicle program regulations, it comes down to four criteria:

*CARB then decided to once again amend the criteria with this key alteration:

"The minimum range qualification has been corrected from 80 miles range to 75 miles range for range extended battery electric vehicles (BEVx) to match the minimum requirements for BEVxs in 2012 through 2017."

This means that the new BMW i3 with range extender should qualify for the $2,500 incentive, just like a pure battery electric vehicle would. It does not automatically imply that the i3 REx will qualify for the white HOV stickers, although it would seem logical that it should. It's also worth noting that the HOV decal and the CVRP are two separate programs, even though the CARB establishes guidelines for both.

BMW Chimes In With a Statement

I have recently contacted the California Center for Sustainable Energy and the Air Resources Board, and I'm led to believe that the i3 with REx will qualify for $2,500 CVRP and green HOV decals.  This belief aligns with BMW's statement (courtesy of BMW Blog) on the matter:

"The i3 with Range Extender qualifies for the green sticker, which is limited in numbers and will run out in the eventual future (possibly late in 2014). This is technically to be expected since the car is equipped with an internal combustion engine which potentially emits fuel fumes, and thus makes it harder to qualify for the white sticker which typically can be obtained by full battery-electric vehicles (BEV) and Hydrogen vehicles. The white sticker is not limited in terms of numbers. There is a continued, constructive relationship between BMW and CARB executives, and there has been no reversal of position. It also bears mention that the i3 with Range Extender qualifies for the full CA incentive amount of $2,500."

There is apparently still a chance that the i3 REx might get white stickers as well.

Finally, there has been some talk that the range-extended i3 might not qualify for the BEVx classification in its first year, but perhaps it would be best to table this type of speculation for a future post.