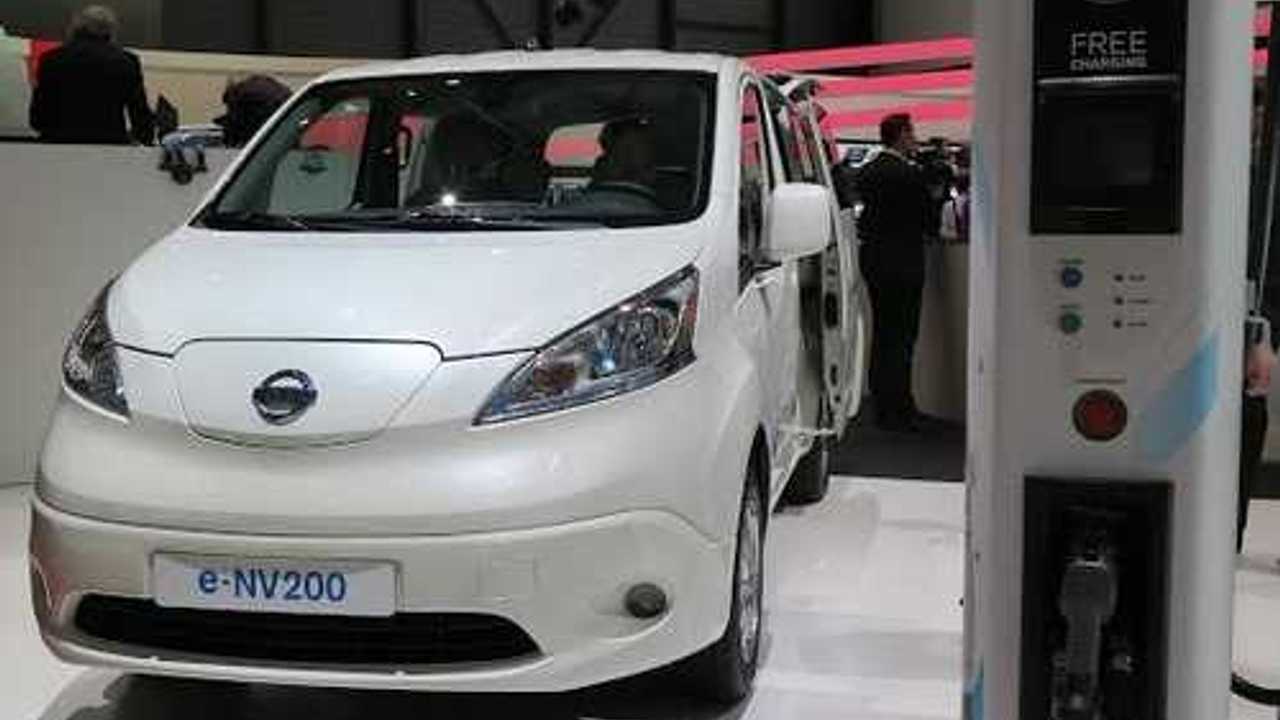 As promised Nissan has revealed the production version of its all-electric van, the e-NV200 at the Geneva Motor Show today.   Nissan calls their second electric offering a game changer, saying that the "e-NV200 is ready to change the face of light commercial vehicles forever."

Here are Nissan's initial bullet points on the plug-in van for its introduction in Europe:

It should be noted that the e-NV200 using the same basic setup and 24 kWh battery as the Nissan LEAF - but the pack itself (which is assembled in Sunderland, UK) is built in a different configuration to maximize cargo area.

Thanks to this fact, we can be fairly assured that the e-NV200's US EPA range will come in right around initial expectations - 72-75 miles.  The commercial version of this van (it also comes in a retail 5 passenger) has a cargo volume of 4.2m3 and can "carry two standard Euro pallets."

As for those changes over the gas burning version of the e-NV200:

"Differences between e-NV200 and NV200 include striking visual changes, a re-engineered chassis, interior revisions, a new battery pack, a higher capacity regenerative braking system and other modifications to ensure e-NV200 is better suited to its likely role as a city-based delivery vehicle for cargo and people.

The most obvious visual difference between e-NV200 and its conventionally powered sibling is the adoption of Nissan's EV "face," familiar from Nissan LEAF. The central charging doors and unique blue tinted LED headlights give a modern look and distinct identity from its ICE sibling.

Blue-tinted arrow-like positioning lamps sit within new, crescent-shaped, headlamps that incorporate a distinctive ice blue light colour. LED bulbs are used in the rear lights of all versions as well as at the front on passenger models. The "electric" blue theme extends to the e-NV200's badging."

The Nissan e-NV200 will now go on sale in the UK in June (originally estimated for May).  Of the course, the question everyone wants answered is "how much?"  And for that, we have to wait just a bit longer, as no such information was yet available at the electric van's reveal.

Inside, the e-NV200 's interior reminds us a lot of the LEAF, with a familiar center stack console.  The instrumentation cluster is something we have yet to see from Nissan, and may point to where the company is headed with the 2nd generation LEAF in a couple years.

"Another drivetrain change over LEAF determined by e-NV200's likely usage pattern is a new braking system with a higher regenerative capacity. This takes advantage of the vehicle's typical stop/start city driving modes, while Hill Start Assist is fitted as standard, holding the vehicle for two seconds after the footbrake is released to allow smooth starting."

As for the re-configuration of the battery pack itself:

"The Lithium-ion battery which has been changed to allow it to fit under e-NV200's floor without compromising the cargo area. The new pack, which is built at Nissan's plant in Sunderland, UK, and assembled in Barcelona, has the same number of modules - 48 - as in Leaf and the same 24kWh capacity, but is packaged differently.

The battery module is set low in the vehicle under the load floor and is mounted in a reinforced zone for extra safety protection in the event of an impact. The battery mounting assembly also helps boost the torsional and lateral stiffness of the vehicle by 20 percent and 35 percent respectively over NV200.

With a low centre of gravity, the ride and handling levels of e-NV200 are exceptional, even by the standards set by the NV200 while the instant torque delivery typical of an electric vehicle means the battery-powered version accelerates faster: its 0-100km/h time is quicker than the 1.5 dCi-powered NV200, with final figures confirmed later this year."

As for the United States, the only thing that is known at the moment is that it is coming at some point; but highly unlikely for 2014.