BMW Jumps Past Toyota to Take Lead in Electromobility in Germany 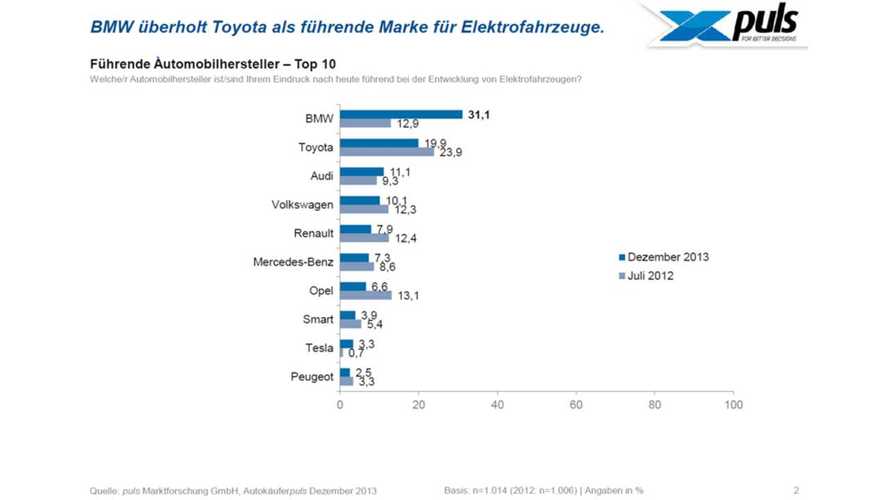 Admittedly, our German language skills are poor, so we turn to Google Translate (slightly edited to remove obvious translation errors) for this one...no that won't work either, as this first translated graph proves:

"The show launches of vehicles such as the BMWi3,  Opel Ampera and Tesla, electric cars have outgrown the prototype stage.  In addition, the increasing visibility of these vehicles on the road promoting the consumer interest in electric cars.  Against this background, employs the Nuremberg market research pulse for four years with the question of the establishment of electric mobility in Germany.  In this context, it is also about the question of which car brands are leaders in the development of electric vehicles.

According to a study there is a changing of the guard: Driven by the launch of the BMW i3 lays in the competence for electric vehicles by 13 percent in July 2012 to 31 percent in 2013 and clearly overtaken Toyota."

Basically, BMW has overtaken Toyota as the automaker who leads in electromobility, according to the 1,014 German motorists who were interviewed.

The Google translate version talks more about the "changing of the guard", which we translate to the BMW i3 has pushed the German automaker past Toyota and into the lead in perception of electromobility in Germany.

Opel and Renault fell backwards for a "promotion not so intense that even the brand itself benefited from it."  In other words, Opel and Renault don't advertise their EV offerings in Germany.