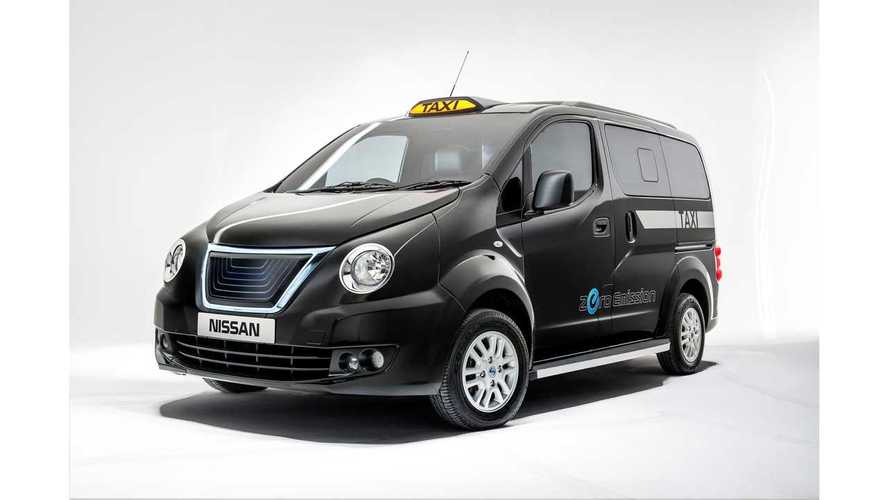 The New Year began just a few days ago and Nissan is already showing off a new concept electric.

Meet the e-NV200 London Taxi based on the electric delivery van e-NV200, which itself is based on the ICE NV200.

The original version was re-designed "to make it instantly recognisable as one of the capital's iconic black cabs."  The EV was developed for London and in London by Nissan Design Europe (NDE) in Paddington.

"The NV200 cab for London is part of Nissan's global taxi programme, which also encompasses New York, Barcelona and Tokyo. The London version's design is bespoke, reflecting the rich heritage and status of London's black cabs."

Among the specific changes that have been made to the front of the NV200 taxi are:

The gasoline version NV200 Taxi for London equipped with the 1.6-litre petrol engine and an automatic gearbox will be launched in December 2014. The electric version of NV200 taxi is planned for 2015, so sadly we must wait at least over a year:

"Nissan is also forging ahead with its pioneering work in the sustainable motoring field, developing a 100 per cent electric taxi - the e-NV200 - which it aims to have on the streets of London years ahead of the Mayor's target of 2020 for the development of a zero-emissions taxi. Nissan's electric taxi will be on the streets of a UK city in 2015."

Electric NV200 Taxi for London has the same charging inlets as the Nissan LEAF.

"Having already overcome the unique technical challenges presented by the development of a new Hackney Carriage for London ahead of our launch of the vehicle in August 2012, we turned our attention to making the vehicle look the part."

"The Mayor's office and taxi drivers were very keen that we maintain the character of the Hackney Carriage, making it something that people in the city can be proud of."

"The main challenges were concerned with making sure customers can easily recognise it as a taxi. Being in London, we were able to go out and talk to cabbies about what was important to them as well as look at the vehicle from a customer's viewpoint. It's unusual for us to be able to work on something as bespoke as this, specifically for one location in the world and we are very proud to have been asked to do so."

"Since we launched our Taxi for London in August 2012, we have worked closely with the Mayor's office and associated stakeholders and interested parties to ensure that Nissan's new cab not only raises the bar for both driver and passenger, but is also as instantly-recognisable as its legendary forebears."

"Alongside this, our engineers at Nissan Technical Centre Europe in Cranfield, Bedfordshire, have continued work on the cab, running real-world trials on the streets of London."