BMW Builds The Most Efficient "Purpose Built" EV Yet - The i3

One of the conversations that is rarely if ever included in the EV forum discourse is efficiency. There is as much conversation as you could ever want about range, conveniences, charging protocols, acceleration, regen, interior sound levels, battery life, interior capacity and more but very few words are exchanged about how efficiently EVs propel themselves and their occupants from destination to destination.

Even, one might say especially, in the realm of alternative energy vehicles where reducing the carbon footprint is central to the concept, efficiency remains the true premium since in their presently generated form, all alternative fuels have a carbon cost. Possibly someday in the future we will be swimming in gloriously abundant photovoltaic electricity and the story will be different but we are nowhere near that yet.

BMW i3 Engineered For Highest Efficiency

True, EV drive trains are inherently more efficient than their ICE counterparts but they are currently powered by batteries and energy storage density in batteries is much lower than gasoline as we know. For a given vehicle package with current technology, EVs are heavier than ICEs due largely to battery mass. As we also know, mass is the enemy of motion, or more accurately change in velocity - acceleration, braking, turning, suspension response and handling are all negatively impacted by mass.

The lower battery energy density makes the balance between mass and performance more delicate for EVs than for ICEs - a few more gallons of gas won't penalize you much in mass but it will provide substantially more energy. Obviously energy can be increased by a larger battery as well but batteries are heavy and a bigger battery necessitates a stronger structure (read heavier) and the return is not linear. The heavier structure also requires stronger (heavier) suspension components which then require a bigger battery which mandates a stronger structure . . .

The lower battery energy density makes the balance between mass and performance more delicate for EVs than for ICEs - a few more gallons of gas won't penalize you much in mass but it will provide substantially more energy. Obviously energy can be increased by a larger battery as well but batteries are heavy and a bigger battery necessitates a stronger structure (read heavier) and the return is not linear. The heavier structure also requires stronger (heavier) suspension components which then require a bigger battery which mandates a stronger structure . . .

So I thought it would be good to look at EV choices relative to efficiency to see where the market is. I compiled a list of the EVs that have been tested by the EPA with their five cycle test, hoping to result in a data set that is more objective then by using OEM numbers or magazine tests. I recorded the efficiency in kWh per 100 miles for each vehicle from the EPA list (I am only analyzing BEVs so I just don't want to look at MPGe, too much ICE in it for me). Since I am interested in the BMW i3, I appended several projected performance configurations to the list as follows:

The projected/unconfirmed numbers are in blue text in the tables.

I then calculated Miles per kWh, the metric I like best for BEVs, in another column. I added a few other data points that may be of interest to this discussion and populated them from the OEM websites, 0-60 times came from zeroto60times.com except when it was available on the OEM website. Sorting on Miles per kWh generated the table below:

Sorting on Miles per kWh generated the table below: 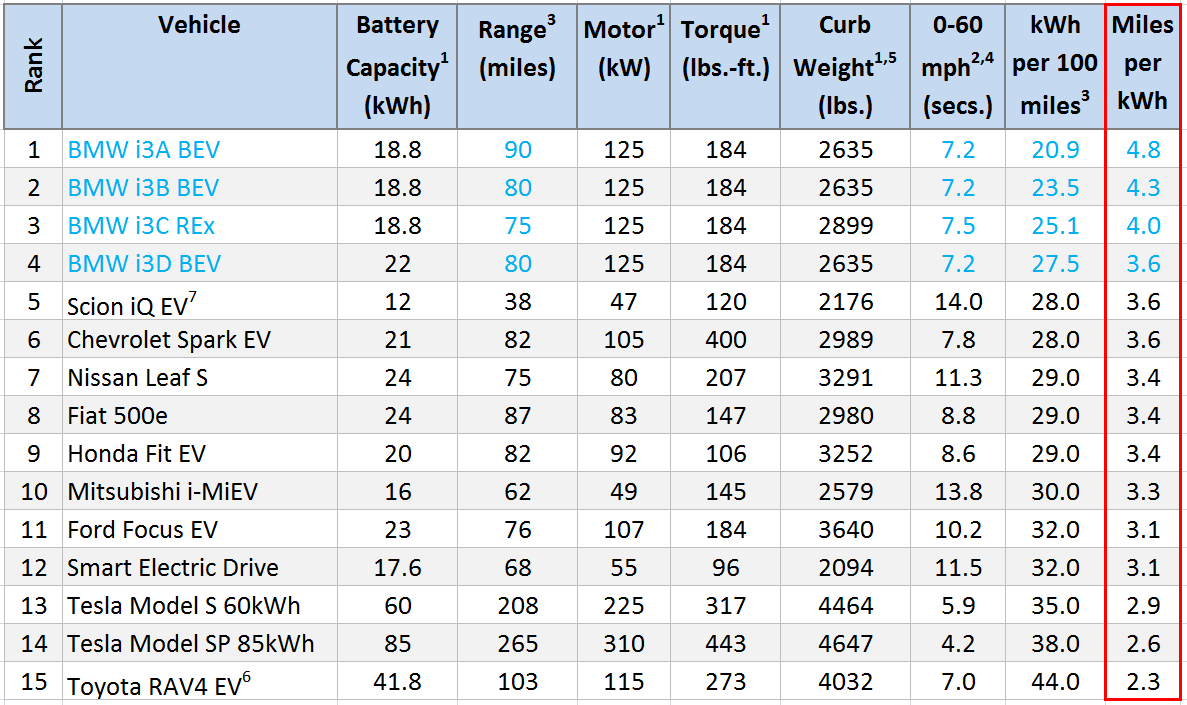 In this analysis, the BMW i3 is the hands down champ in all four  projected performance configurations with i3A more than twice as efficient as the RAV4 and nearly twice as efficient as the Teslas. Assuming the i3 actually tests at one of these levels, the Bavarians have achieved quite a remarkable result - even the worst case projection, the i3D, is at the top of the "do more with less" rankings. But does it sacrifice in other important areas?

As important as it is, efficiency at the expense of other critical performance criteria does not a great product make so I checked out a few other rankings starting with 0-60 times: 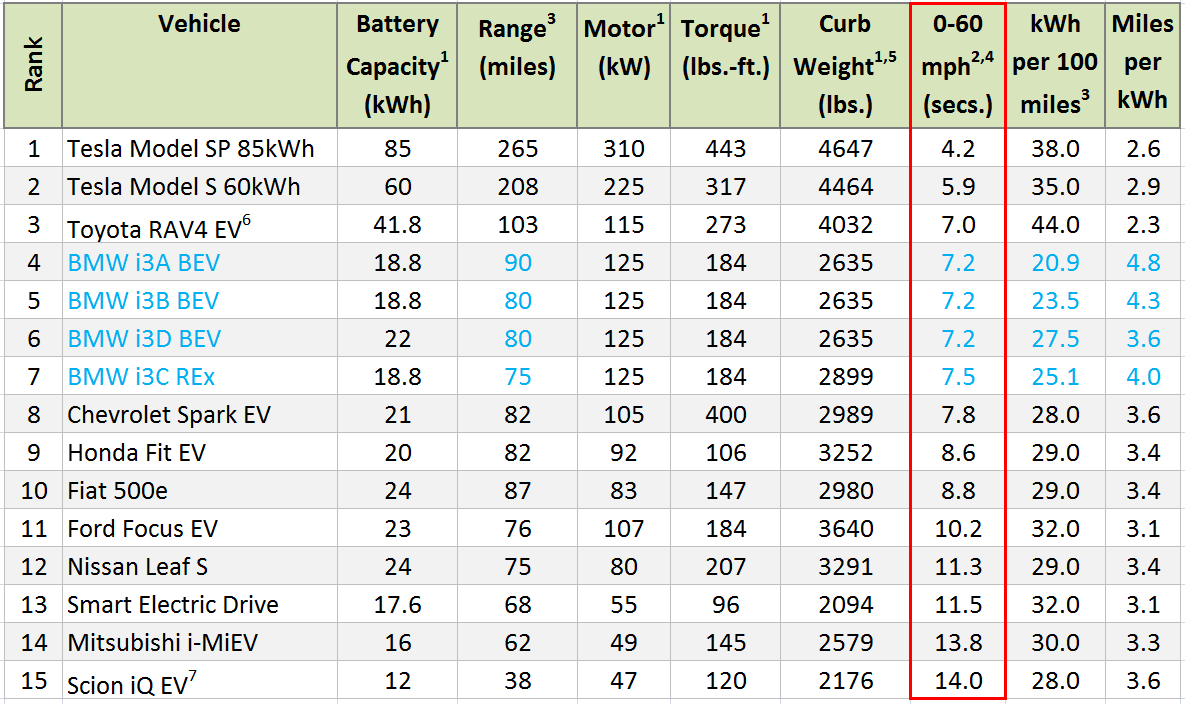 The Teslas dominate this measure as we all know. The four i3s hold their own though, high on the rankings, right after the Teslas and the RAV4. The RAV4 is a surprise but it does have that big battery.

Next was Curb Weight: 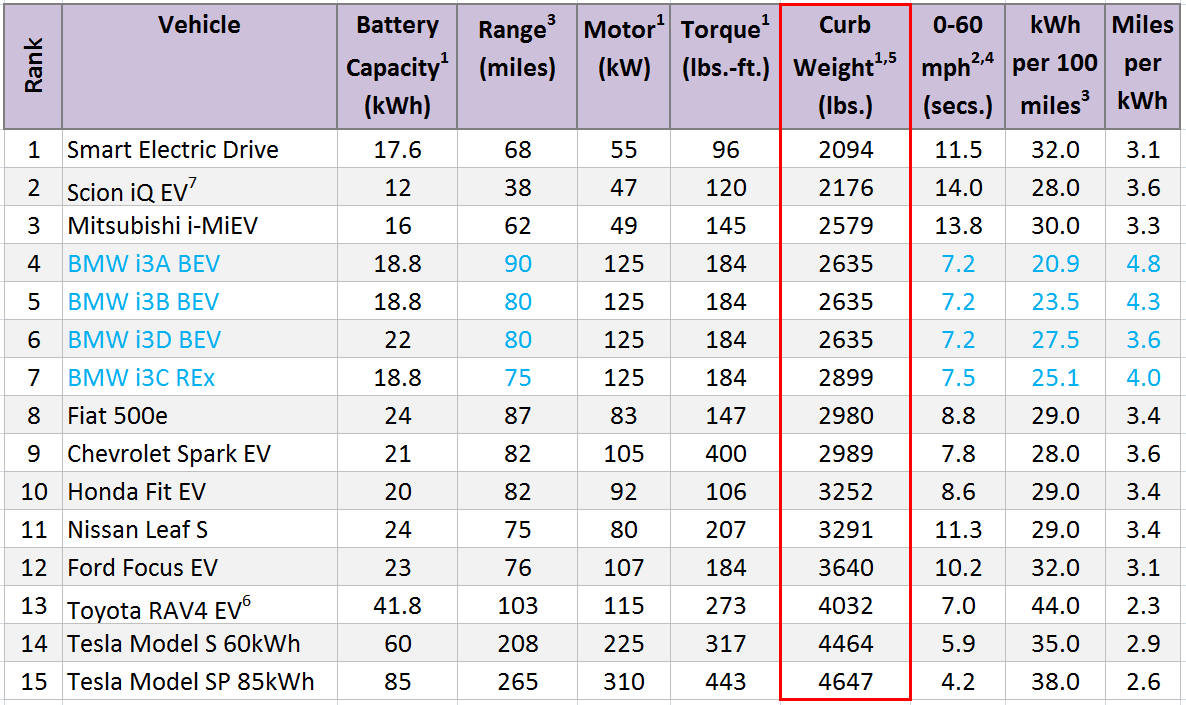 Pretty Hard To Find Anything Lighter Than A smart ED

The i3s are not the lightest of the group which may not be surprising considering the diminutive nature of several of the offerings.

As small as the small ones are, including a two-seater, as a group they operate on the lower end of efficiency spectrum emphasizing that mass is not the only factor in doing more with less. The Teslas are the heaviest by a substantial margin - the SP85 is literally a full ton heftier than the i3 BEVs. That is allot of metal and leather to be hauling around all the time and it manifests as bottom of the rankings efficiency. 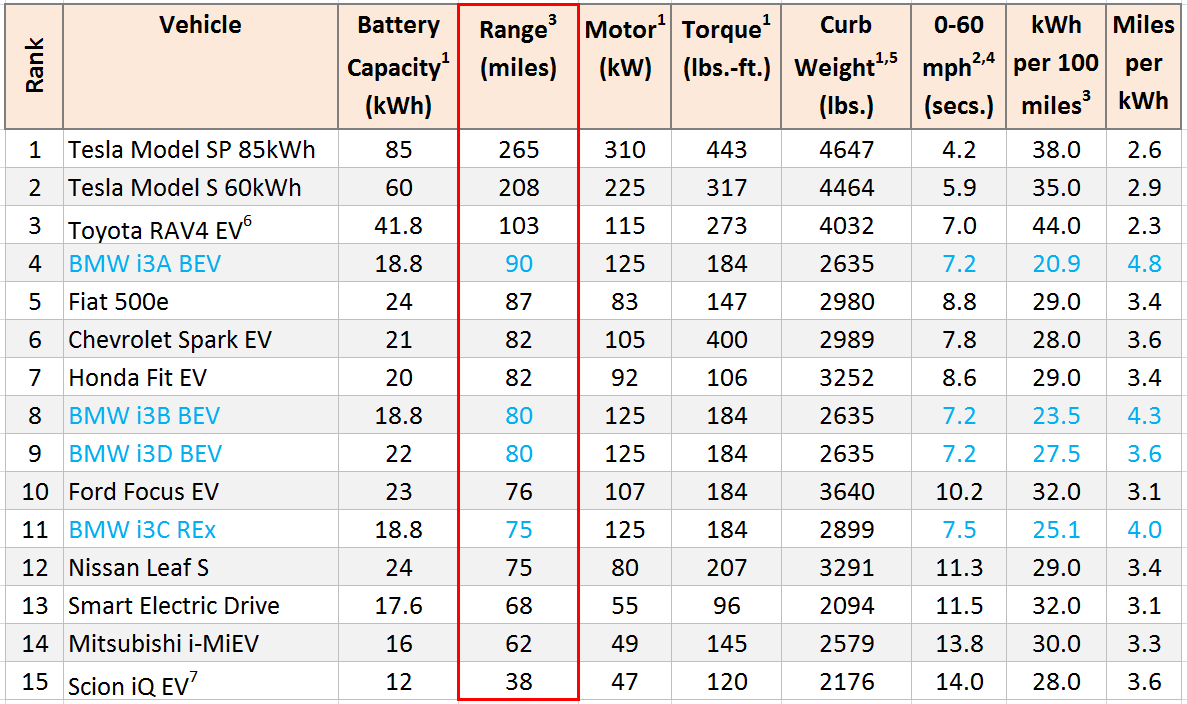 Again the Teslas own this category with their massive battery packs but they do it with brute force, sporting the lowest efficiency and highest mass in the group. The i3s are distributed in the middle of the rankings, depending on configuration, generally ahead of other vehicles that offer much less in other function and features. It will be enlightening to see where they actually fall out after EPA testing.

The i3 has clearly established a new bar in efficiency demonstrating what is possible with a clean sheet, purpose built design. It will likely not be challenged until more purpose built EVs are brought to market. It is not the smallest or the lightest or the least utilitarian or the slowest EV from the set the EPA has tested which one may expect from the vehicle with the highest efficiency. In fact quite the opposite - it also exhibits strong performance by other measures including acceleration and with its low curb weight, it should prove to be very nimble and has already been reported to possess great handling. All with seating for four adults and a cargo area. In my opinion it is the best all around performer due to all of these considerations, the most significant of which is its EV leading, carbon footprint reducing efficiency.