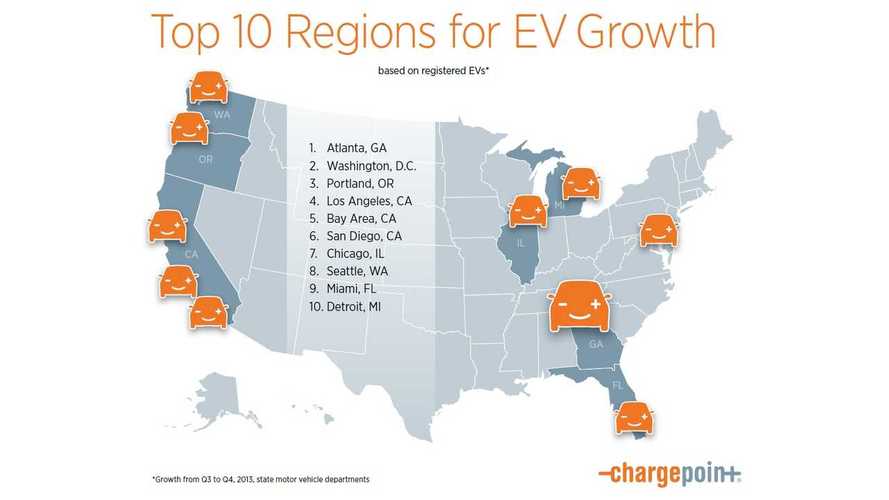 By now, many of us are familiar with the top markets in the US for selling plug-in cars - places like San Francisco, Los Angeles, Seattle, Atlanta, Portland, Honolulu.  But which regions are the fastest growing from the 3rd quarter to the 4th in 2013?

Outside of Atlanta...which is a gimmie considering Nissan almost 1,000 EV sales in just December alone thanks to Georgia's $5,000 state incentive, the list does have a couple different faces on it.

According to ChargePoint, who compiled the data, and who also operates the largest charging station network in America, places like Detroit and Chicago are now coming on strong.

In addition to the graphic, ChargePoint says that the Los Angeles region still logged the most EV sales between October 1st and December 31st of last year at more than 5,000 plug-ins sold.  Atlanta finished 2nd with over 3,000.

Naturally ChargePoint has a EVSE-related slant on the numbers:

“Popularity is increasing because drivers know there is a robust network to charge their cars and nearly every major automaker is coming out with a cool new EV,” said Pasquale Romano, CEO of ChargePoint. “The electric vehicle market is no longer just growing in California’s metropolitan areas - EV adoption is happening across the nation. We’re well on our way to having twice the number of EVs on the road by the end of 2014.”

The Nissan LEAF Has Been Selling Like Crazy in Atlanta, But A Proposed Elimination Of Georgia's $5,000 EV Incentive Would Certainly Drop The Region Off The List For Good