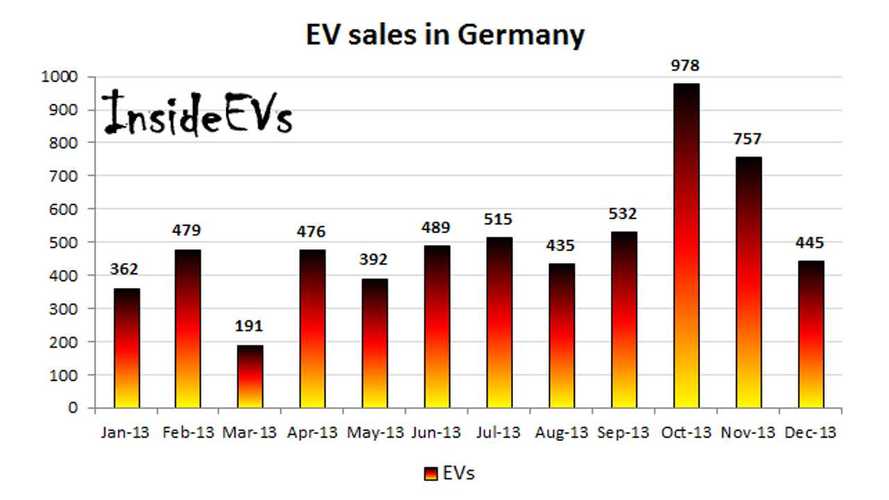 Official data on electric cars sales last month in Germany are not optimistic.

In December, with the gradual rollout of the Tesla Model S, BMW i3 and VW e-up! all underway, sales somehow fell back to the volume prior to these vehicles appearing (Aug/Sept.).

Is it possible that all three manufacturers - Tesla, BMW and VW - had some rollout/supply problems or this the true market size without incentives?

This number seems too small to accommodate decent sales figures for the EVs that have been available in Germany for awhile now - smart ed, Renault ZOE, Nissan LEAF etc.

We don't yet know sales for particular models, so stay tuned for that full report.

In the whole 2013, we see 6,051 registrations of new electric cars in Germany (excluding plug-in hybrids), which is twice as many as in 2012, when just 2,956 were registered. This is positive for sure.

What's interesting, ~40% of all EVs are smart fortwo electric drives. Total sales of this EV for 2013 must be around 2,400 units - probably more than in all other nations combined.

"Even the smallest model in the product portfolio of Mercedes-Benz Cars has made it big in 2013. Since the market launch of the smart fortwo, over 1.5 million of the compact two-seaters have been sold. The electric version of the smart car became the number one battery-powered electric vehicle in Germany, securing a market share of around 40 percent. Some 1,200 smart fortwo electric drive vehicles are continuously deployed around the world in the car2go mobility service. Since November, the electric smart has also been on sale in China, making it available in a total of 14 markets.Even Pope Francis has now joined the ranks of electric vehicle users. Dr. Dieter Zetsche, Chairman of the Board of Management of Daimler AG and Head of Mercedes-Benz Cars, presented the Head of the Catholic Church with a smart ebike during his visit in July."

Daimler stated that 1,200 is the current number of smart ed in Car2Go services around the world (but some of them were deployed in 2012).