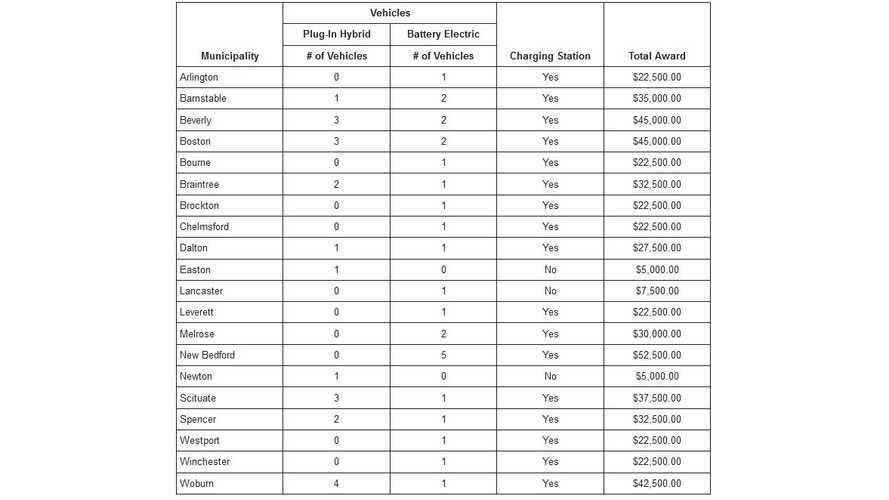 In the past, we have covered a couple of the Massachusetts cities that have been awarded funds to use towards the purchase of plug-in vehicles.

But we'll surely miss the announcements made as more and more of these plug-ins are purchased, so we figured we'd sum up what's going on in Massachusetts instead.

The state is awarding 20 cities with grants of varying amounts.  The grants will be used to purchase plug-in vehicles for the city fleets or in some cases to buy electric school buses.

The grants, which total $550,000, will only cover a small portion of the cost of purchasing the plug-in vehicles and installing chargers.

"The grant program, available to public and private fleets, will be administered by the Massachusetts Department of Energy Resources (DOER) and funded with $11.7 million in Congestion Mitigation and Air Quality funds from the U.S. Department of Transportation’s Federal Highway Administration. DOER will solicit project proposals in the coming months."

An additional grant package of $1.8 million has been set aside for the purchase of 8 electric school buses.  These buses will be V2G capable.  School districts interested in obtaining one of these buses must apply.  The selection process is based on several criterie, one of which is whether or not the area has been designated a Green Community.

“By taking this step, Massachusetts is joining the ranks of cutting-edge jurisdictions that recognize the important role EV school buses can play not only in cleaning up pupil transportation but in the electrification of the broader transportation sector."

The Patrick Administration is investing $2 million in additional funding to the Massachusetts Electric Vehicle Incentive Program (MassEVIP), operated by the Massachusetts Department of Environmental Protection (MassDEP), for a second round of incentives for municipalities to acquire electric vehicles and install charging stations.

Under MassEVIP Phase 2, eligible applicants will include municipalities, state agencies, car-share companies, and public universities and colleges. Up to $7,500 per electric vehicle and up to $15,000 per publicly accessible charging station will be available to eligible entities. The deadline for submitting applications is February 14, 2014.