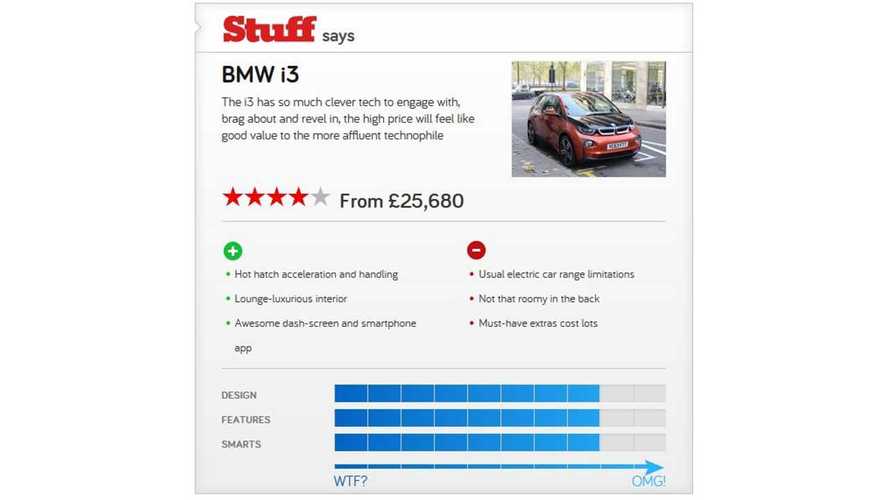 The BMW i3 reviews continue to pour in and after seeing/reading perhaps 3 dozen of them, the verdict is that the i3 may not be the world's best electric vehicle, but it's darn close.

This review, courtesy of Stuff, gives the i3 4 out of 5 stars.

The knocks are price, which is rather high when options get added in, a cramped back seat and range limitations.

However, Stuff says the i3 has hot hatch acceleration and handling, so for those looking for a fun EV that doesn't cost as much as a Tesla Model S, the i3 is probably the right choice.

Here's the rest of what Stuff says in terms of pros and cons for the i3:

Pros: The government’s £5,000 plug-in discount is already factored into the £25,680 start price, but owners pay nothing for the annual tax disc. There’s zero company car tax on the pure electric version and both it and the extended range version duck the London congestion charge. According to BMW, 10,000 miles will cost you £140 in electricity using EDF’s nighttime Economy-7 tariff (i.e. charge it overnight), compared to £854 to fuel a frugal Audi A3 1.6 diesel over the same miles.

Cons: A similarly practical BMW 116i costs £100 less to finance per month than the cheapest i3 lease (£369). And no-one will keep it that low: the i3’s long list of must-have extras includes a charge-point cable at £169 and the charge-point finding sat nav for £960, so that monthly price is going to creep up steadily once you get to the options list.