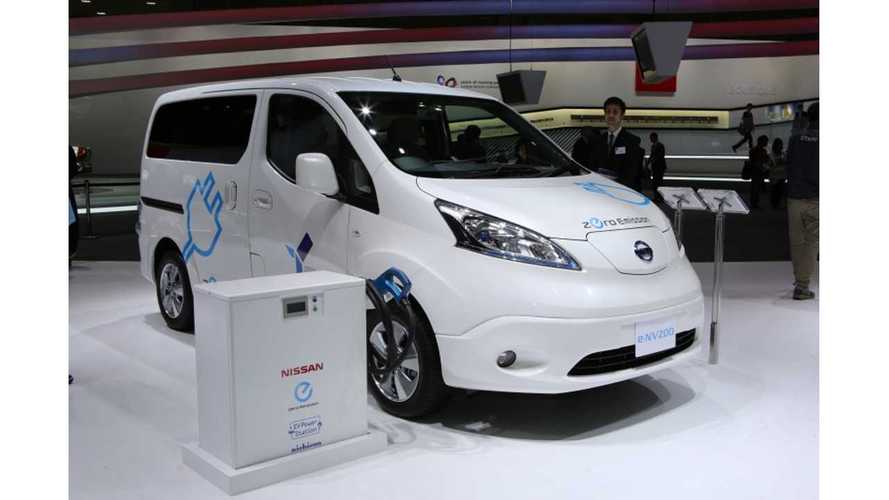 Nissan announced today that their all-electric e-NV200 van will make its production-ready debut at the 2014 Geneva Motor Show early next month.

Going one better than that, they also announced the vehicle will also begin sales in May of this year.

And we have to say, with Geneva media show tickets already in hand, we can't wait to check it out in person as plug-in vans headed in volume production to be sold worldwide are pretty rare - as in, there is none

Nissan states that the e-NV200 will be available both as a work and passenger van, available to both commercial and public buyers:

"When sales start in May, e-NV200 will be available as a van or as a five-seat people carrier in Combi or more luxurious Evalia guises. Although mainly targeted at businesses, e-NV200 will also appeal to private users with large families."

Performance details are still a bit thin on the e-NV200, but given its platform and electric drivetrain are taken from the LEAF, an all electric range of about 180 km (NEDC) is expected, or about 75-78 miles on the US EPA metric.

The van will also feature the same 107 hp and 207lb ft of torque found in the LEAF - but more importantly DC fast charging (essential in a commercial application) as well.

Nissan's media conference and reveal is scheduled for March 4th at 2:30 pm local time (8:30 AM Eastern/5:30 AM Pacific) and we'll have all the specs and shots of the e-NV200 live from the show then.  If you are local to Geneva, the show is open to the public from the 6th to the 16th.

Sales and deliveries of the Nissan e-NV200 will begin first in Japan and select regions in Europe, with the US to follow (dates to TBA).