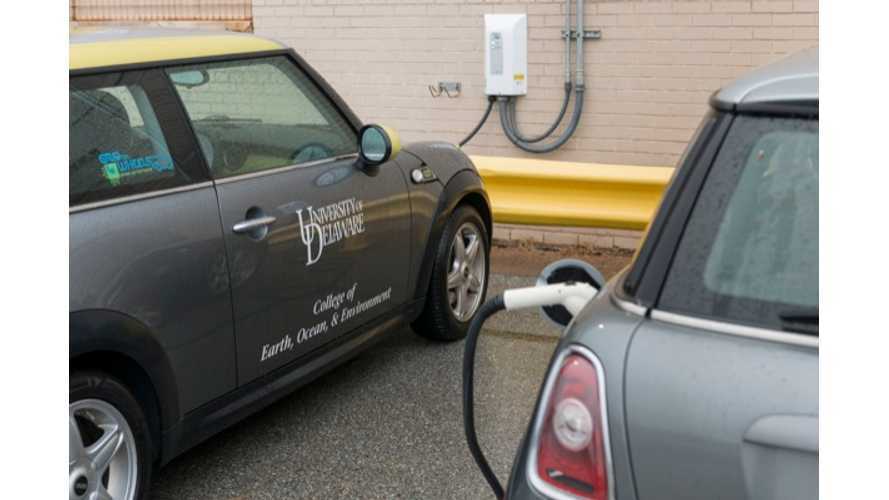 The state of Delaware is hoping to be at the forefront in terms of EV charging infrastructure.

To ensure its leading position, Delaware has committed to install free (at least until the end of 2014) public charging stations no more than 50 miles apart throughout the entire state.

"Faster charging stations for electric vehicles will be strategically placed at key locations in Delaware to enable long trips in the state by next year, through a new collaborative research agreement between the University of Delaware (UD) and the Delaware Department of Natural Resources and Environmental Control (DNREC)."

Don't be confused by the term "faster" though.  These will be Level 2 chargers capable of up to 16-kW, per J1772 specs, but that won't be the output of the chargers.  Expect normal Level 2 charging at these sites in Delaware.

As University of Delaware adds:

"Willett Kempton, UD professor, and his colleagues will work with public and private location owners on the initial set-up and on a long-term plan, which could include a fee in subsequent years to cover any ongoing costs."

"The new stations will not be more than 50 miles apart, which is the battery range for the least expensive electric vehicle models today."

"With a budget of $80,000, the entire project costs less than one long-range electric vehicle. Yet the project would serve many hundreds of electric vehicles due to the driving pattern of most Americans, who make long trips only a few days a year."