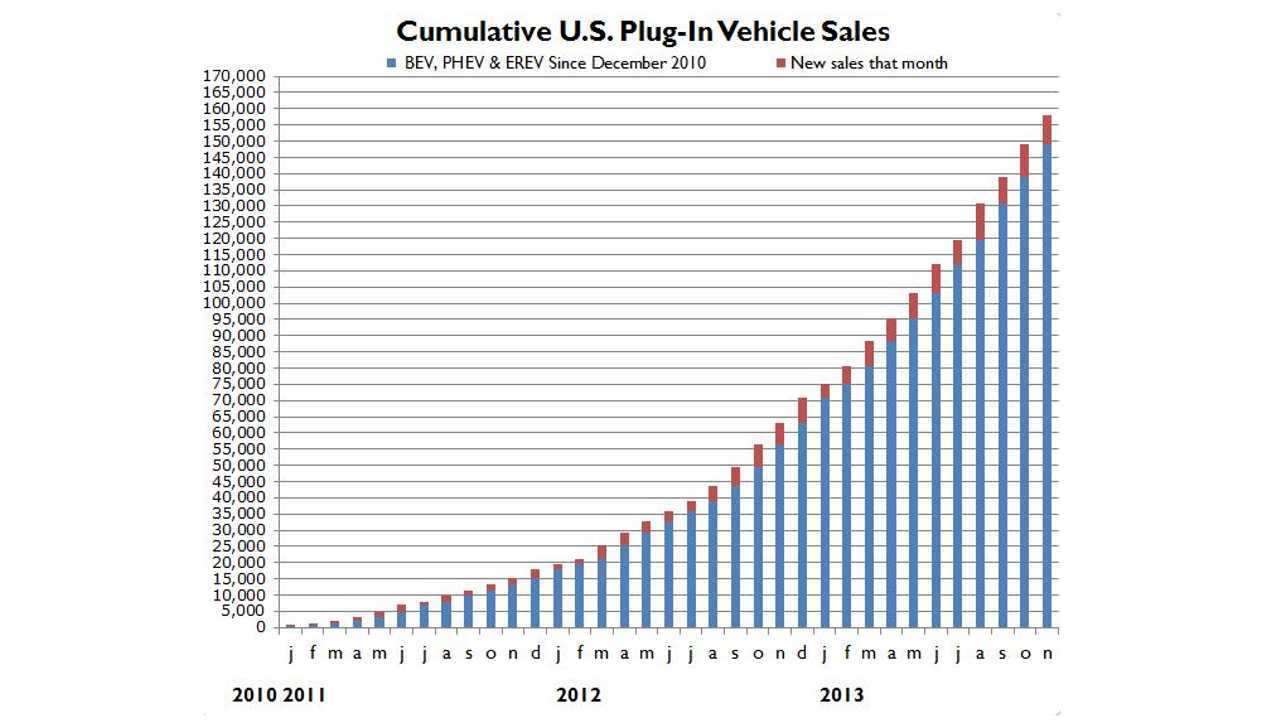 So it’s the numbers season once again as we look to tally the EVs (plug-ins) sold in the US market. It is pretty clear that 2013 EV sales are just shy of the 100,000-units sold mark this year, an impressive 45% increase over 2012. This puts the growth curve well ahead of the hybrid curve that started in 2000.

During the first 30 months of hybrid sales, around 3,000 hybrids per month were sold. The EV market is nearly triple that at around 9,000 plug-ins per month.

So, the question begs to when we hit the one million EV milestone? Yeah, I know, it makes the chief editors cringe to talk about such things, but tis the season. First, lets take a stroll down memory lane.

The original proposal was put forth in 2009 coming off a failed attempt of the EV1 and RAV 4 a decade before and with only the $120,000+ Tesla roadster available. Still, the proposal needed a number and there it was. One million EVs on the road by the end of 2015. Now, this prediction was so full of holes, it was a pretty easy number to discredit.  CBS pounced on the prediction and even was bold enough to make their own. So, it was quite incredible when CBS made equally bad predictions with an extremely low number of 310,663 by the end of 2015 that was equally easy to discredit. Politics! We don’t care so much about that, we just want to talk numbers.

New reports do not only focus on sales per vehicle and that is smart with the explosion of available choices. It is also wise not to predict around models only when the number of vehicles on the list are still ebbing and flowing at this point.  Some anti-EV predictors will certainly point to slow sales with the Plug-in Prius and Chevy Volt, though the Volt will be once again the number one seller.

Can I have a piece of your EV pie?

The fact is the "EV pie" is both growing in size and giving up slices to additional models at the same time. The Plug in Prius has given up pie  to the substantial sales of the Ford C-Max Energi and the Volt has certainly given up some of the pie to the Ford Fusion Energi and will give up some more to the BMW i3 in 2014. Meanwhile the overall pie continues to grow in size and add more competing slices. Please visit the graphs at the top of this site provided by contributor kdawg to see more (or click here). So new predictions offer other methods such as a percentage on the annual growth of the market as a whole. Currently that percent was given by Navigant as 17%. Using their number, this would put the one million happening just short of 2018.

We also look for a shorter milestone of the first million EVs sold and that is the first global million. Although shorter in duration, it is much more complex. Will the Indian government take an active role in 2014 or will it be 2015? Will Tesla find success in China? Will global battery demands constrain the market? If the US million makes it by 2018, the global million should make in half this period.

Exactly how many are they?

These are two different numbers. Almost every report deals with new EVs sold, but it does not tell the whole tale of the EV evolution. As CNG vehicles rise, do you not think they count conversions on their scorecard? Of course they do and they should.  It has to do with what people are driving and what infrastructure is needed.

So what about the number of EV conversions? We would truly love to know this number.  I tried to contact a few conversion shops to get a feel for this number but there just isn't any clear path to the math. Bottom line, this number is large enough to most likely put the 1,000,000 EVs "on the road" over the line with ease by 2018. As others have recently posted, 2-3 years off the original projection that was made before most of the first models even hit the road is not too bad.

Proof enough for this enthusiast that EVs are here to stay and will be a dominant force in years to come. So as we close the sales count in a couple of days, we salute our EV conversion brothers and sisters who we have no measure of counting. We know you're out there and we acknowledge you on the road to the electric highway.  For the rest, we here at InsideEVs will be watching every step of the way.