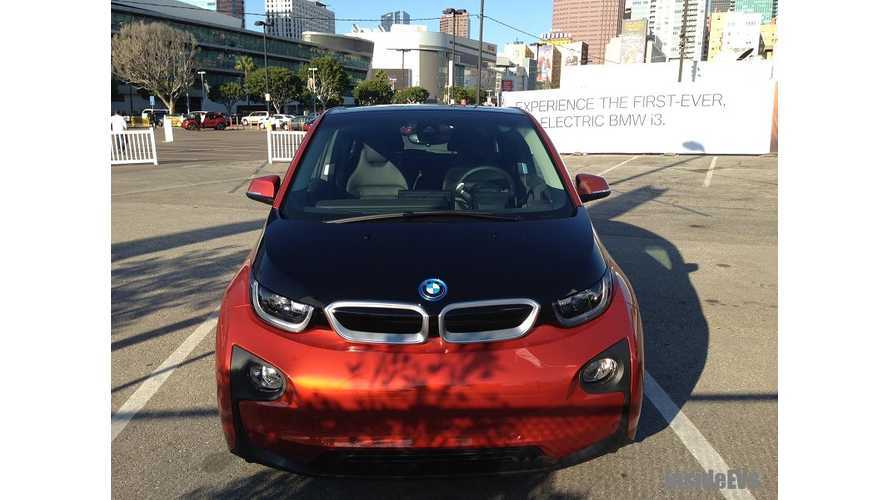 It's well known that BMW invited journalists and the public to test drive its i3 at the 2013 Los Angeles Auto Show.

Most of those drives were brief, so there hasn't been much to report in regards to "reviews" of the vehicle from LA.

However, this one posted by Guide Auto Web caught our attention.

"BMW invited journalists to attend the i3 press drive event in Los Angeles one day prior to the opening of the Los Angeles Auto Show. I was excited to learn I’d be able to participate, not having yet driven an electric vehicle."

So, did the i3 amaze this EV newbie?

The answer to that is yes.

Looks-wise, it’s certainly not your everyday vehicle. Exterior styling pushes the envelope and will stand out quite a bit. While it won’t’ be everyone’s cup of tea, I much prefer something out of the mainstream rather than a bland-looking car for the masses.

The i3 accelerates seamlessly and quickly when you need it. Even uphill we had no issues and to be honest, it yielded pretty incredible acceleration. The best part was that acceleration came without the financial and environmental guilt I usually get after opening the throttle in my gasoline-powered vehicle.

I found the car very responsive in the twists and turns when we were in the mountains. The turning circle was extremely small (it helped because we missed a few turnoffs and had to u-turn to get back on track.) The tester came with the optional 20-inch wheels which helped plant the car firmly to the ground and the i3 did everything I wanted and more.

I only had the car for two hours as opposed to the week-long periods that journalists usually get to test vehicles. The thrill of driving something totally new for the industry was quite pleasing and I left wanting more from this electric wonder.

For the first time driving an EV of any type, one wouldn't expect the words "electric wonder" to come out, but apparently the i3 impressed.