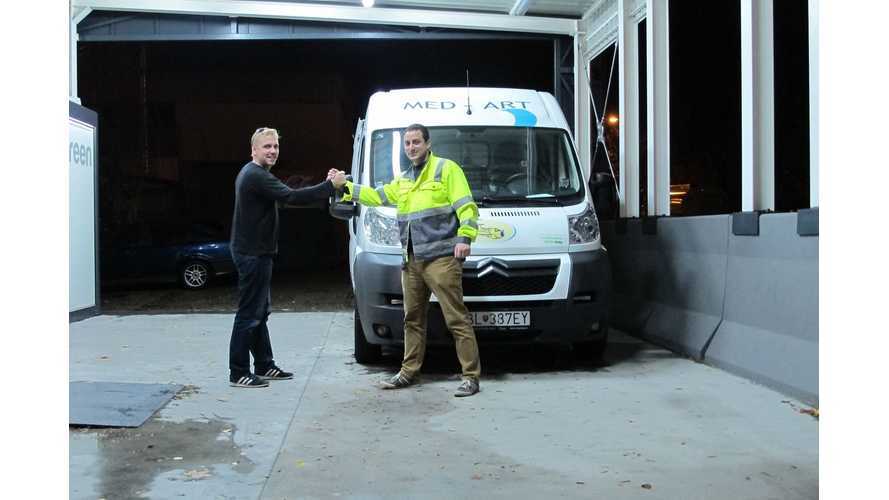 "Limited driving range is perhaps the most commonly used argument against buying or using electric vehicles. But technology has progressed to the point that electric vehicles can now provide their owners with typically more range than is actually needed each day. Not just in everyday life but also under the more demanding conditions of daily business operation. To prove that this is indeed the case, GreenWay attempted to break the world record for greatest distance travelled within 24 hours by an electric van. The Guinness Book of World Records currently lists 1,200 kilometres as the maximum."

Recently, GreenWay claims to have set an unofficial world record for the longest distance covered in 24-hours, which indicates to us that battery swapping technically works just fine. One car, with three drivers that swapped position with each others every few hours, traveled over 2,000 km. in 24 hours - 2,048.2 km to be exact (~ 1,273 miles).

"During the second weekend of November, three drivers took turns behind the wheel of our pure-electric van on the route between Bratislava and Nitra in an attempt to break the official record currently held in the Guinness Book of Records, first as a trial run without an audience. To achieve this attempt, quick battery swaps were carried out after repeated journeys between the capital and Nitra. Such battery swaps are easily handled by any driver in less than 7 minutes, which incidentally is roughly the time it takes to refill a vehicle’s tank and pay at a gas station."

"During the 24-hour journey our drivers managed to cover a total of 2,048.2 kilometres, exactly 848.2 kilometres more than the previous official record. In the near future we plan to replicate this unofficial record breaking achievement, but this time for real in the presence of independent testers and the public."

848.2 km over the existing record!!!  Too bad it's not yet official.  Let's hope GreenWay does indeed replicate this under official conditions and with independent verifiers in the near future.