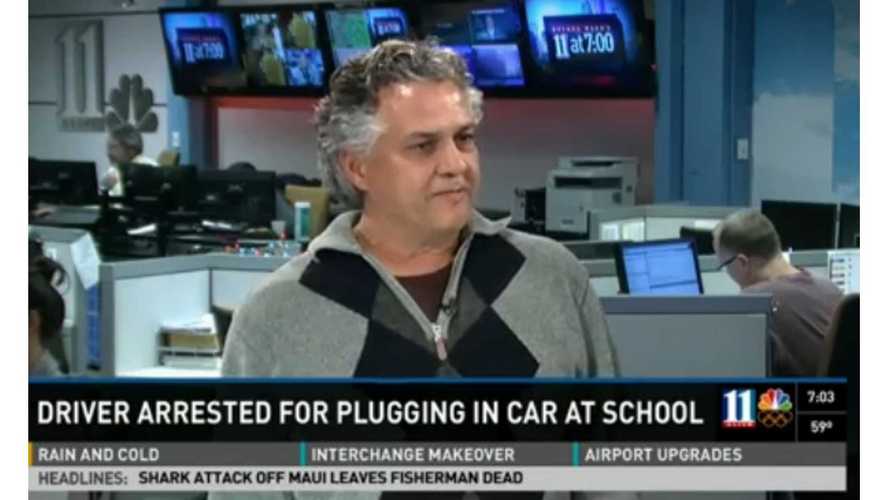 On November 13, 2013, around 7 pm, I arrived home to find a police patrol car awaiting me. I was arrested in front of my two young children and my astonished wife and neighbors. I spent over 15 hours in jail. My alleged crime: stealing 5 cents of electricity for my electric car 11 days earlier from a publicly accessible outlet at a local middle school while watching my son play tennis.

*Editor's Note:  Our thanks to Kaveh for taking the time to recount his story and pass along his first hand prospect of not only the events, but how we (as a wider community) should perhaps view and react to these kinds of events in the future.  You can check out our original report on the "electricity heist" here.

A diligent reporter from the local NBC affiliate, Doug Richards, got wind of the story and aired it on December 3. Within a few hours the story went viral, generating much discussion and even a couple of songs satirizing the police action on YouTube. Judging from the many write ups on the various sites and the posted comments to those stories, the general public overwhelmingly thought that I was the victim of over zealous policing. An internet poll showed that the margin in favor of that sentiment was better than 9 to 1. In a CNN segment, one of the two legal commentators suggested that civil rights charges be brought up against the police. The other, who is usually there to give the other side of the story, thought the police response was "absolutely absurd" (here). The solicitor responsible for prosecuting the charges reportedly laughed when my lawyer asked her what she was going to do. She dropped the charges.

Faced with the public backlash, the police chief, a day after the story went viral, issued a statement (here) claiming that my arrest on theft charges wasn’t really so much about theft, but more about me trespassing and having sassed up the officer on the scene. I had been previously told, according to his statement, not to come to that location and that I did not cooperate with the officer on the scene. I disputed all the material claims in the chief’s statement (here). Many of the subsequent media reports (e.g. here) contained both the police chief’s claims and my denials, leaving the readers to decide.

There were a couple of exceptions though. Faced with contradictory claims and without any further evidence, a few reporters simply took the police chief’s claims on face value and reported that I am a liar, ignoring that the only material claim in the case shown to be false so far is the police’s representation of the value of the electricity to the judge while obtaining my arrest warrant. They told the judge that I took $10 to $25 of electricity. Nothing unusual though, right? After all, there are a lot of bad journalists out there. But when you consider that the two most egregious offenders of this journalistic sin are reporters from sites devoted to green energy and EVs, an unexpected pattern emerges. (See the two articles here: CleanTechnica.com and AutoBlogGreen. Then compare them to the report in the conservative Heritage Foundation blog here, which calls the police "simple minded".)

Similarly, in one of the very first reports on the incident (here), a spokesman from the local EV club, when asked about the incident, could only remark that I should have asked permission before I plugged in. He apparently didn’t hear what had been reported earlier in the same segment that the incident happened on a Saturday morning while no one from the school was there. Nor was his reaction like that of many others who, upon hearing the story, noticed that other uses of the school facilities impose comparable costs on the tax payers but don’t seem to require similar permission.

Reading the posted comments corroborates the same pattern. Commenters who identified themselves as EV drivers were quick to disassociate themselves from my "misbehavior," ignoring that the only known transgression was that the officer on the scene had, by his own admission, entered my car and gone through my check book, apparently to find out who the owner was. I was no more than 60 feet away on the tennis court, my license plate and VIN were visible from outside the car and looking through the check book with my name on it did not end his searching my car. Marcopolo, a commenter on one of the sites and a self-identified EV driver, expresses satisfaction that the general public has shown "tolerance" of EVs, and goes on to comment:

"...our goal of electrifying our personal transportation system is a worthy one."

I believe it's very important for EV drivers to ensure EV's maintain a good public image. It's the general public who sponsor much of the supporting infrastructure. As an EV driver, I try to ensure that I share the highways with as much goodwill as possible, remembering that much of the infrastructure is paid by other peoples tax dollars, including a taxpayer funded rebate on the price.

Marcopolo is so apologetic of the values he expresses as an EV driver that I am afraid one day soon he may just melt away from embarrassment as he’s driving his EV down the highway. S/He goes on to denounce my "arrogance" and "feelings of superiority." Marco must know me personally!

Admittedly Marcopolo isn’t typical, but the pattern is clear: EV drivers are more defensive and spineless about the values they’re promoting than the general public is about those same values. Most people appreciate that given the indispensability of cars in our lives, EVs present the best solution we have for mitigating their devastating environmental impact.

When the editors of Inside EVs asked me to write something about my experience, I expected to contribute a little something to the conversation about the benefits of EVs over gas powered cars or maybe say something about the conceptual issues surrounding theft and consent. But it has become clear to me that we, in the EV community, need to first have a conversation amongst ourselves about what we stand for and how best to promote those values. Here are a few thoughts.