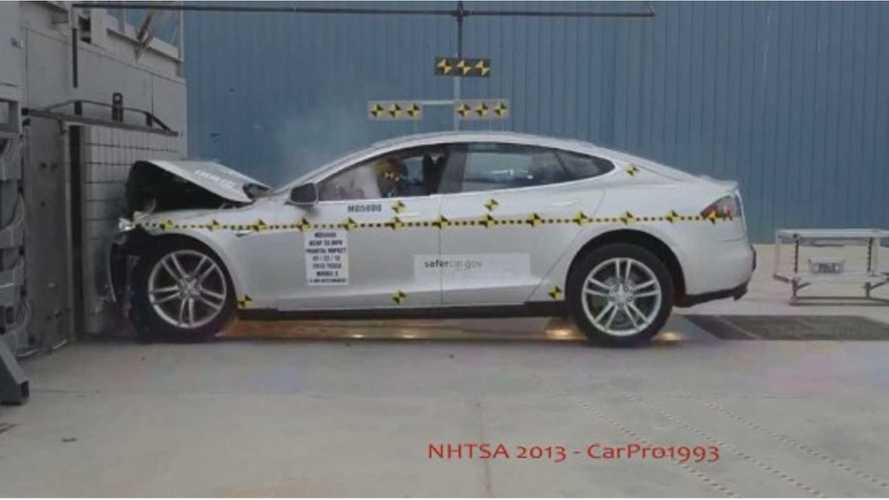 Tesla put out a note on Monday touting the continued safety rating of the Model S into 2014.

"The National Highway Traffic Safety Administration (NHTSA) has reaffirmed the 5-star safety rating of the Tesla Model S overall and in all subcategories for Model Year 2014, confirming the highest safety rating in America."

Tesla also took a moment to revisit the lower risk expectancy of experiencing a fire in the Model S over a conventional vehicle; although if it was us, we think we probably would have taken a pass on highlighting the incident again.

"While Tesla is awaiting feedback from NHTSA regarding their investigation of recent fire incidents, the German Federal Motor Transport Authority, Kraftfahrt-Bundesamt (KBA), recently concluded its review of the incidents, finding no manufacturer-related defects or need for further action.  (InsideEVs story on that can be found here)

It is worth noting that a Tesla vehicle is over five times less likely to experience a fire than the average gasoline car and that there have been zero serious injuries or deaths for any reason ever, fire or otherwise, in a Model S. Over the course of more than 100 million miles driven in almost every possible terrain, weather and crash conditions, the Tesla Model S has consistently protected its driver and passengers, achieving the best safety track record of any car on the road."

As a refresher, here is the 2013 NHSTA data sheets, plus all the footage you can stand of the safety agency destroying the 265 mile EV: