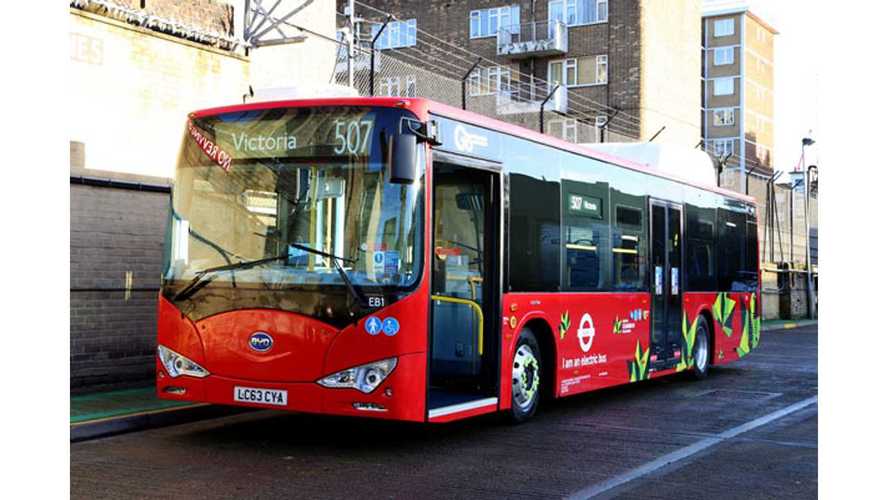 BYD has announced that two electric buses were handed over to Transport London this week, where they will operate on two central London routes - 507 and 521.

In Shenzhen, China, 220 eBuses (but with doors on the right side) have accumulated more than 13 million miles thus far. Now, thousands of people in London will also have the opportunity to experience electric public transportation for the very first time.

The Chinese company stated that savings will be tremendous and expects the buses to see 4,000 full charging cycles over the next 10 years.

"While the BYD ebus delivers zero emissions public transport it also offers bus operators tremendous operating cost savings. The energy consumption is around 130kWh/100km in urban conditions. The ebus battery takes 4 to 5 hours to recharge from totally exhausted at a cost of in the UK of only £19.44 (using off peak electricity – the buses will be recharged at night). This represents a saving of up to 75% of fuel cost compared to a diesel bus."

Matthew Pencharz, Senior Environment and Political Advisor to the Mayor of London, commented:

“The Mayor has made it a top priority to further reduce the environmental impact of London's bus fleet. Alternative technologies, such as these electric buses, will bring genuine long term benefits in tackling CO2 and PM emissions. The arrival of these pure electric buses compliments a whole range of measures the Mayor is supporting, including hybrid and hydrogen technology, which is already delivering improvements to air quality.”

“We will be closely monitoring the performance of these vehicles while they are being trialled here in London. Should the performance and reliability of these buses meet London’s challenging requirements, this could be a very important step towards adopting this new clean technology in the capital.”

“We are convinced that widespread adoption of the BYD ebus could have a dramatic effect on lowering pollution levels in major cities so this development in London, one of the world’s top cities, is of tremendous importance. We look forward to a long and positive relationship with Transport for London and Go-Ahead and to further deliveries of our market leading products in London and other UK Cities”.