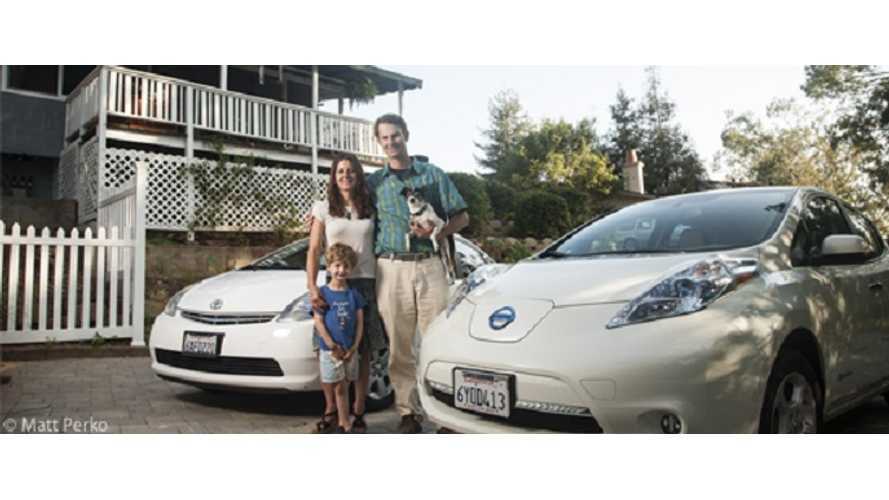 It Just Feels Good To Be Green (photo via Matt Perko)

Jeff and Mandy Phillips are always looking for ways to ease their impact on the environment. When Jeff heard there was a special on the Nissan LEAF that would make it possible for him to drive a brand new zero-emissions vehicle and save substantially on his car payment, he signed a lease the next day.

Almost immediately after this, he crunched the numbers and found that, with an electric vehicle to charge, putting solar panels on his home finally made economic sense. He is now “driving on sunshine.”

Jeff drives from his home in Santa Barbara to his job with the U.S. Fish and Wildlife Service in Ventura five days a week -- a 70-mile round trip commute that he used to do in a Ford Escape hybrid.

While the environmental benefits of the Nissan LEAF were an important reason for his switch from hybrid to electric, it also proved to pay off – with estimated savings of about $245/ month. Here’s how he does it:

Expenses before driving on sunshine:

Going solar was something Jeff and Mandy always wanted but, with a small home and a low utility bill, it didn’t make financial sense. Now for what they used to pay in monthly gasoline expenses, he is charging his car, paying their utility bills, and paying off the solar loan they financed the panels with.

After five years, the loan will be paid off and the Phillips family will enjoy at least 20 years of free electricity to power their home and car.

“It’s exciting to make such a huge change and also have it make total economic sense,” he says.

Jeff likes leasing the electric vehicle because it is relatively new technology and leasing allows him to try it out for three years before committing to a new purchase. Does he anticipate keeping an electric car after his lease is up? “Definitely. I love it”. He says the car is fun to drive and performs better than a gas-powered car and corners nicely.

Match the fast acceleration with the lack of accompanying motor noise and it’s “like being in a rocket ship.” Jeff says the quiet ride means phone conversations are easier and music sounds better, which is a bonus during his long commute.

Jeff Initially Chose To Lease His LEAF To "Try It Out", But Now Intends To Buy It Out

While Jeff says that he hasn’t found any serious drawbacks to driving an electric vehicle, it is smaller than his Ford Escape. It helps that Mandy has a Toyota Prius hybrid which they’ve made “as close to an SUV as possible” to accommodate their recreation-intensive lifestyles. He’s added a trailer hitch to attach a bike rack, a roof rack for surfboards, and a storage box for camping gear.

Jeff encourages those who are on the fence about making the switch to a plug-in car and solar power to take a second look at the numbers.

“A lot of us have the desire to be environmentally-conscious or reduce our carbon footprint, but we don’t have a ton of money to pay for it and have been waiting until it all adds up economically. But that day is here. People may not realize it, but take a close look at the cost and you’ll see. The time is now.”

To learn how you can start “driving on sunshine” or add solar power to your home, contact CEC at 805.963.0583 x 105 or info@cecsolarize.org.  CEC can answer your questions about technologies, paybacks, and incentives.

Editor's note: In cooperation with the Community Environmental Council (CEC) we present this environmental (and financial) success story combining renewable energy with plug-in transportation.  Our thanks to Michael for reaching out to us, as well as Brina Carey for putting the piece together.