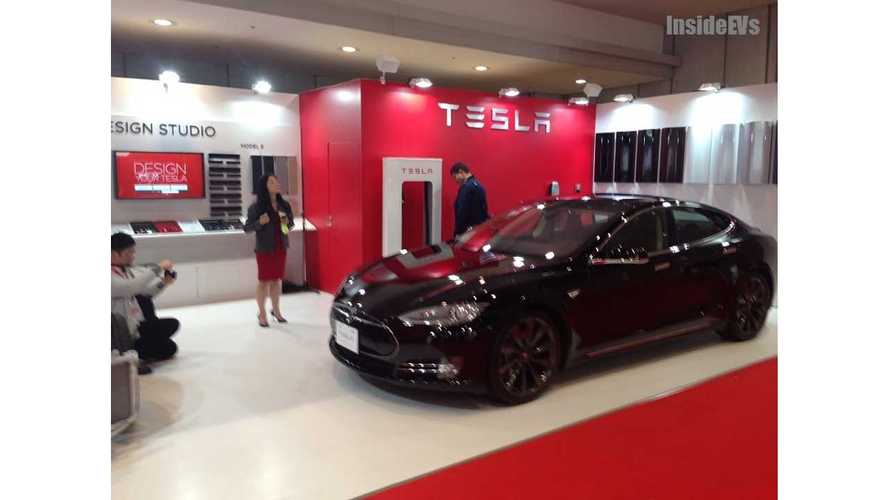 Don't You Hate Stock Pics? We Do. So here Is A Shot We Took Of The Panasonic-Tesla Both At The Tokyo Motor Show This Year - That Is In No Way Related To This Article

Unlike Nissan with the LEAF, Tesla is not free to just go out and sell 1,000 electric vehicles in a month (as Nissan almost did in December) in Georgia - they can only sell about 12 in any given month on average.

Tesla's "No Franchised Dealership" Model Works Well In Places Like Toronto (pictured above), But Not So Well In Atlanta Thanks To Selling Caps

Due to state laws, and Tesla's determination to not follow the classic franchised dealership model, the company can only sell up to 150 Model S sedans in per year - as they operate under a special "zero emission" exemption that allows them to sell only a limited amount of cars directly to the public.

Now a Tesla-backed proposal introduced February 6th by Republican House Reps. Chuck Martin, Earl Ehrhart and Buzz Brockway, would see that number increased 10-fold, up to 1,500 per year; or 125 per month if you will.

And still while not the most ideal situation for Tesla long-term, it would allow them to avoid "the dance" the company is currently doing to move product in Georgia - as reports have the company having sold more than 500 out of Atlanta alone in just the last year.

According to the Atlanta Business Chronicle, Georgia customers can check out the Model S at a Tesla boutique, then are directed to the Tesla website to learn more; and to ultimately place their order online.

Oh No, Stock Footage Of Atlanta Did Find Its Way Into The Article!

At that point the car is both manufactured AND delivered in California before arriving later in Georgia.  At this point the customer is then required to self-register the Model S with the Georgia Department of Motor Vehicles.

Clearly this is a hoop Tesla doesn't want to have clients be forced to jump through, and this relief on the legislation would go a long way to achieving that end- at least in the short term.

Naturally, we expect the Georgia Automotive Dealers Association to be none-too-pleased with this bill.

Thanks to a generous additional incentive of up to $5,000 by the state, which can be combined with the $7,500 credit offered nationally by the Feds, Georgia now ranks as the 4th more receptive state to electric vehicles according to a recent study by Edmunds - approximately 1 out of every 90 new vehicles sold in the state plugs in.