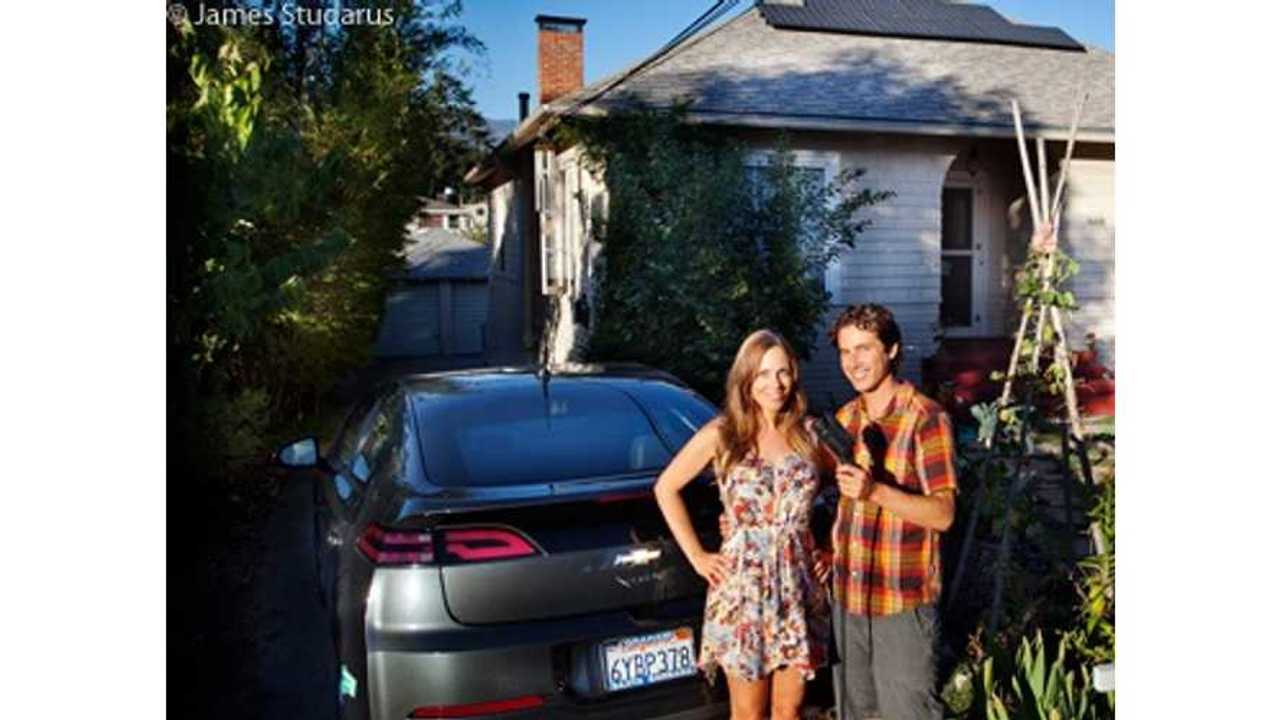 While I’ve always commuted by bike, eaten low on the food chain, recycled and composted, reduced my use of plastics and used energy efficient lights and appliances, the two largest things I could do to cut my carbon footprint drastically evaded me until just a few months ago.

After buying a small house, I started saving to invest in solar panels. Because of my work at CEC (Community Environmental Council) to help prepare the Central Coast for a large number of electric vehicles, I had been eyeing the new electric cars starting to come to market. Then last year, the 1998 biodiesel Volkswagen that my girlfriend Sarah and I shared became less reliable -- and after repairs and much debate we decided to lease a Chevy Volt. Soon after that, we had enough saved up to install a 2.88 kW solar system at our house – large enough to zero out our monthly electricity bill and charge our new electric car.

Specs On Michael and Sarah's Setup

Before getting an electric car, our electricity bill ran around $40/month -- small enough that while going solar was something we wanted to do from an environmental standpoint, the financial payback was on the longer side. Once we added a Chevy Volt to the household, however, the bill increased by around $50/month (replacing a $100/month fuel bill for our old biodiesel Volkswagen), and we were pushed into Southern California Edison’s more expensive Tier 3 electricity rates. Suddenly solar power jumped to the top of the home improvement list, especially considering we could switch to Time-of-Use rates and charge the car inexpensively at night while getting credited for valuable daytime peak solar power.

Our 2.88 kW solar system from California Solar Electric cost $7,500 after the state rebate and federal tax credit. The payback is six to seven years (though may be faster if we mostly charge the car at night) and with a 25-year warranty on the solar panels we’ll be able to power our house and an EV for free for decades. If electricity rates continue increasing at about 6% a year (the historical average), then the system should produce enough clean electricity to save us about $55,000 in electricity bills over 25 years. This home improvement has also increased the value of our property.

The Chevy Volt Was The Optimal Vehicle For Michael's Household

After looking at all of our options, we determined that the Chevy Volt would best meet our household’s needs as it combines the best of an electric car’s efficiency (getting 100 mpg equivalent with zero tailpipe emissions) with the long distance range of a hybrid. By charging overnight off a regular 120-volt outlet, the car can go 38 miles on electricity, which is usually plenty of charge to cover Sarah’s daily client meetings. On occasional trips to neighboring cities like Ojai or Ventura, we use public charging stations -- effectively enabling us to travel 75 miles a day in electric mode. We often go a few weeks without using a drop of gas, but on longer trips such as to San Francisco the gasoline range extender kicks in, enabling the Volt to achieve around 40 mpg for over 300 miles of driving before refueling.

Since we leased our Volt, the dealer was able to pass through the $7,500 federal tax credit, which I didn’t have enough tax liability for. The $1,500 California rebate covered the down payment, first month, and registration. With these incentives, our $355/month lease payment is actually cheaper than leasing a Toyota Prius or other much less expensive car, and we save on gas as well. Our Volt is nicely appointed and quite luxurious, filled with great technology and fun to drive. Once I even saved the day by unlocking the car remotely from my smartphone app when Sarah had locked the keys in the car and was late for an appointment!

While we never previously considered leasing a car (or even buying a new car), we like moving the EV market forward with our purchase while knowing we won’t be spending money on repairs. This recent article in Consumer Reports outlines why they also think leasing an EV is the way to go. In the last year, EV prices have come down even further. Some pure electric vehicles like the Chevy Spark EV and Fiat 500e start at $199/month with $199 down. They also qualify for a larger $2,500 rebate, so some potential buyers could use this to pay for the down payment and first seven months of driving and use their gas savings to pay the monthly payment.

Putting the two technologies together

With the new time-of-use pricing from Southern California Edison, we can charge our car at night for 9 cents/kWh using inexpensive off-peak power. Meanwhile, our solar panels generate valuable daytime peak power, which is credited to our bill at up to 47 cents/kWh during the summer. In short, we are buying low and “selling” high. Our last bill, for August, was negative, at -$33.88!

According to our home smart meter, on the first day with our solar panels, February 21, production exactly matched consumption. (See graphic) Note the green super-off-peak generation from the car charging midnight to 5 am, then the solar red on-peak generation spinning the meter backwards during the day, and the small orange off-peak consumption in shoulder hours. Charging an electric vehicle (EV) at night is equivalent to paying less than $1/gallon in a 30 mpg gas car.

We were very excited to discover that having solar and an electric car were possible on an average middle class income and the feeling of Driving on Sunshine is priceless!

“Driving on Sunshine” is a series about people who are using grid-tied solar panels on their homes to power their electric vehicles.  More plug-in vehicles are entering the market at competitive prices, including low monthly leases starting at $199/month. In addition, more people are able to afford home solar systems thanks to solar leasing programs and group-purchasing options, such as CEC’s Solarize program.

Michael first published his story at Community Environmental Council's "Power For Good" News Blog - which we encourage anyone who is green-minded to check out.