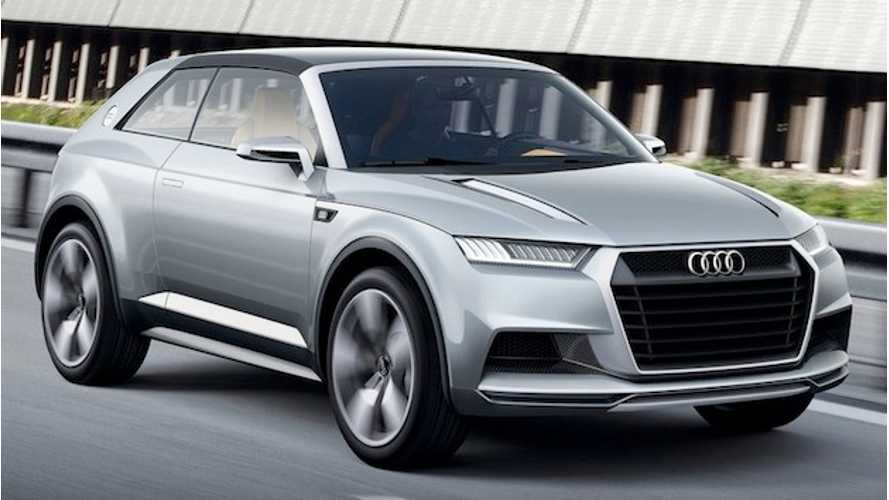 Okay, so it's not quite the 435 miles of range that we reported a few days ago, but 370 miles (NEDC) would still make the Audi Q8 E-Tron the EV range champ.

Autocar is reporting that the Audi Q8 E-Tron has been given the production green light.

This vehicle, expected to be priced at over $130,000 when it launches in either 2016 or 2017, will be loosely based off the Audi Allroad Shooting Brake Concept shown for the first time ever at the 2014 Detroit Auto Show.

If indeed Autocar is accurate (the UK-based magazine cites Audi insiders as its source), then the Tesla Model X will have a true competitor, though we should note that the Model X will beat the Q8 E-tron to market by 2 to 3 years and will certainly be less expensive than the Q8 E-Tron's estimated $130,000.

The Q8 E-Tron will make use of the same battery chemistry and electric hardware that will be found in the confirmed-for-production Audi R8 E-Tron.

Both vehicles will feature some sort of undisclosed next-generation battery technology.  It's believed that the battery capacity of the Q8 E-Tron will be approximately 80 kWh.

There's no mention of battery capacity for the R8 E-Tron, though we suspect it won't be fitted with 80 kWh.  Perhaps something more along the lines of 50 to 60 kWh will give the R8 E-Tron its claimed range of 248 miles with the use of Audi's "different type of battery" technology.

When the R8 E-Tron was first unveiled, it featured a 48.6 kWh battery and had only 134 miles of range.  Audi cancelled the R8 E-Tron due to what it felt was a range that was too limiting.  Audi re-ignited the R8 E-Tron's development when it discovered a "different type of battery" tech that could give the R8 E-Tron a realistic 248 miles (assume NEDC) of range.