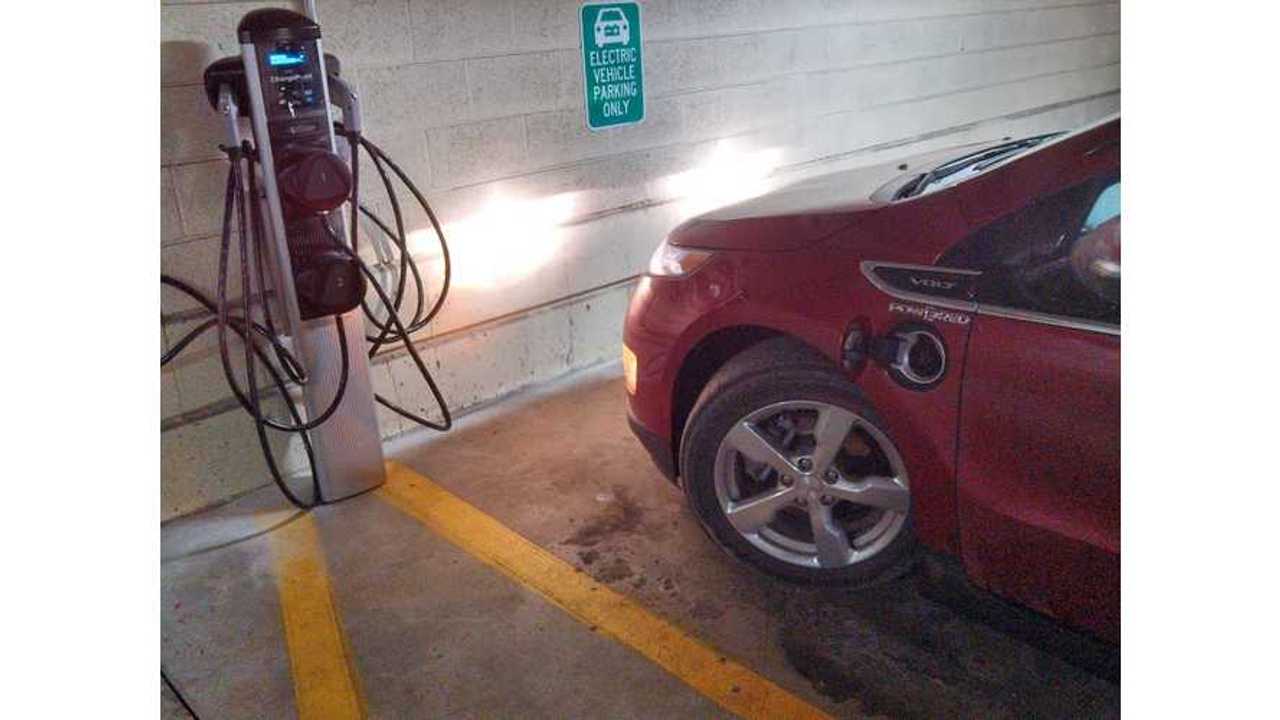 The Workplace Charging Challenge, from the Department of Energy (DoE), snagged 50 companies in 2013 in its efforts to stress a “bottom-up” approach to electric vehicle (EV) charging infrastructure. Where does it go in 2014?

The Department of Energy launched its EV Workplace Charging Challenge in January of 2013 to aid in the adoption of electric vehicles and to lay the groundwork for a charging infrastructure strategy that relies on tax credits, partnerships and now EV enthusiasts.

The challenge aims to “increase the number of American employers offering workplace charging by tenfold in the next five years," according to the DoE’s fact sheet. Company participants include Google, ABB Inc., Zappos, Evernote, Samsung and Nissan, to name a few.

Some insiders in the EV industry are emphasizing that workplace charging could be the tipping point for mass consumer adoption--exposure for consumers to EV technology and benefits up close.

So, does 500 companies by 2017 translate into a tipping point for EVs or will “trickle-down” workplace charging by smaller companies--non DoE partners-- supplement this overall number to provide an EV tipping point?

Not to be confused with trickle charges--usually associated with 120V EV charging--trickle-down workplace charging describes how smaller companies and property owners are taking the plunge at their facility. In 2013, these workplace charging initiatives are being urged on upon by enthusiasts, new EV car owners and informed property owners regarding federal and state tax credits.

Additionally, Sawyer adds that the company is looking to install Level 2 chargers to support the eight electric vehicles--seven Chevy volts and one Nissan Leaf.

Along with the federal EV infrastructure tax credit of 30% on each charge station, additional LEED credits can also be part of cost-savings for owners. In 2014, charging station federal tax credits for businesses and individuals expires.

According to Fauque, the charging at Central Park of Illinois differs from most, it charges $0.40 to connect to the charger and between $0.40-0.60 per hour for a charge. Fauque does not use the chargers due to his short commute and cheaper electricity rates at home.

MetLife offers free charging to employees and is a partner company in the DoE’s Workplace Charging Challenge. It has a total of 32 Level II charging units throughout the country.

At MetLife, employees receive free EV charging at any of the fourteen offices where charging stations have been installed. MetLife is an official partner in the DoE’s Workplace Charging Challenge and has a total of 32 Level II charging units, supplied by GE, spread out across the U.S.

The rollout at MetLife started in the property management group, where Joshua Weiner, senior sustainability lead and John Chambers, assistant vp, promoted this idea of a new amenity for employees and support the company’s existing environmental programs.

Chambers says, “We wanted to do something outside of the box and looked at renewable energy options. We thought the car charging would really resonate with employees.”

The MetLife charging program started in April 2013--joined the DoE Workplace Charging Challenge in May 2013--and currently the company does not have an official reservation policy for employees at the different locales. “Due to low volume, the charging unit policy is on a first come, first serve basis with our building management administering RFID cards for charging,” says Weiner.

MetLife adds, “that Nissan Leafs, Chevy Volts, Ford Fusions and Teslas have been charged at the company’s parking facilities.” MetLife monitors its charging activity automatically through its building automation systems and other companies, such as Texas Instrument and its 46 Level II chargers, will be watching usage levels over the next year.

DOE Map Shows Most of the Participating Workplaces

The DoE did not offer comments on the Workplace Charging Challenge for this article, but did say that at the end of January 2014 there will be a “program information” announcement.

At the Workplace Charging Event in June 2013, sponsored by NextEnergy and CalStart, Sarah Olexsak, workplace challenge charging coordinator, DoE, emphasized that the current fiscal climate in Washington for infrastructure is not positive and that a workplace charging strategy--a bottom-up approach--is vital to continuing EV adoption.

So, with expiring federal tax credits, will workplace charging installations be as attractive and will “trickle down” charging efforts continue in 2014?