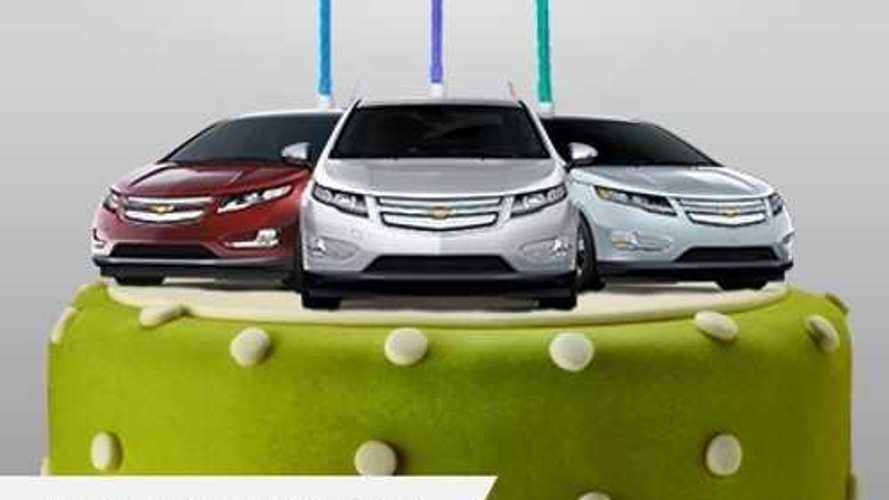 Three years ago today the first Chevrolet Volt was sold!

GM says of the event:

"Happy Birthday Volt! On this day 3 years ago, the very first Volt was delivered. Weighing in at 3,781 lbs and 177.10 inches long, it was our very own electrified bundle of joy."

Just for fun we'll turn the clock back 3 years to revisit that first sale to Rick Hendrick from December 2010 (below)...the first delivery was to Jeffrey Kaffee who also took possession on December 15th, 2010 (also below):

First Chevrolet Sold For $225,000 At Auction - $10,000 Of Which Went To The Students of the Detroit International Academy (GM Photo)

The vehicle, bearing the vehicle identification number BU10002, was sold for $225,000 through an online auction that closed Tuesday, Dec. 14.

“This was an opportunity to own a piece of history while giving back to the community,” said Hendrick, an avid car collector. “I have been a Chevrolet dealer for more than 30 years, and the Volt is one of the most exciting and important new cars since we opened our first dealership in 1976."

The Chevrolet Volt is an electric vehicle that can operate under a range of weather climates and driving conditions with little concern of being stranded by a depleted battery. The Volt has a total driving range of up to 379 miles, based on EPA estimates. For the first 35 miles, the Volt can drive gas- and tailpipe-emissions-free using a full charge of electricity stored in its 16-kWh lithium-ion battery. When the Volt’s battery runs low, a gas powered engine/generator seamlessly operates to extend the driving range another 344 miles on a full tank.

“Every aspect of the Volt – from its aerodynamic shape to its battery chemistry – is a testament to the importance of math and sciences,” said General Motors North America President Mark Reuss. “Now, the first Volt will help cultivate the next generation of engineers who will build upon the Volt’s innovative technologies.”

Chevrolet began shipping Volts from Detroit-Hamtramck Assembly this week. Hendrick will take delivery of his Volt later this month.

Jeffrey Kaffee of Parsippany, New Jersey, is the first customer in the country to take delivery of the Chevrolet Volt (Photo by Emile Wamsteker for Chevrolet)

Kaffee returned early from a vacation to pick up his Volt at Gearhart Chevrolet in Denville, N.J. His is one of 360 Volts being shipped this week from the Detroit-Hamtramck assembly plant. Others were delivered to Chevrolet dealers in the Washington, D.C., area and are en route to California and Austin, Texas.

Kaffee is trading in a Toyota Prius hybrid for his Volt.