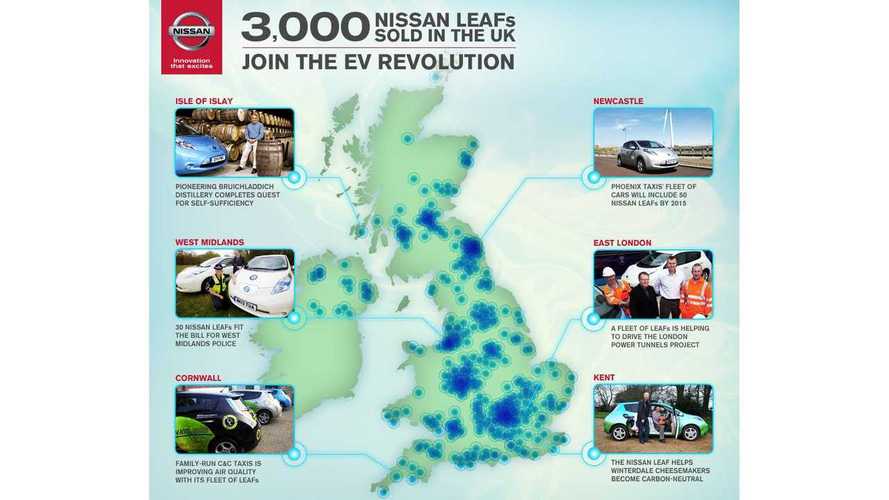 The question is - Is this a high figure or not?

This mean that sales this year should stand at 1,666 or more and year hasn't even ended. So, LEAFs sales in UK are roughly three times higher this year than in either 2012 or 2011.

Nissan announced that, in November, the number of new LEAF registrations amounted to 141. And that the new 2013 version secured more than 1,300 UK sales in just six months (from May). So, we have confirmation that this 1,600-1,700 number could be true.

The price drop, local production in Sunderland and a growing quick charge network must be boosting LEAF sales in the UK.  We're sure the £5,000 incentive and exemption from the London congestion charge is helping to drive up sales, too.

"The LEAF is a true pioneer in every sense and in its lifetime it's already done a huge amount to change attitudes and open minds in the UK and across the world."

"The fact the we have been able to reach the 3,000 mark is a fantastic achievement and shows not only what a wonderful car it is but also that motorists are keen to experience the revolutionary new technology it introduces."

"The low running costs of the LEAF, not to mention its many other benefits, make it an incredibly attractive proposition and we have been seeing steady growth in sales."

"We expect that trend to continue rising as the model's visibility increases and the rapid charging infrastructure expands across the UK."