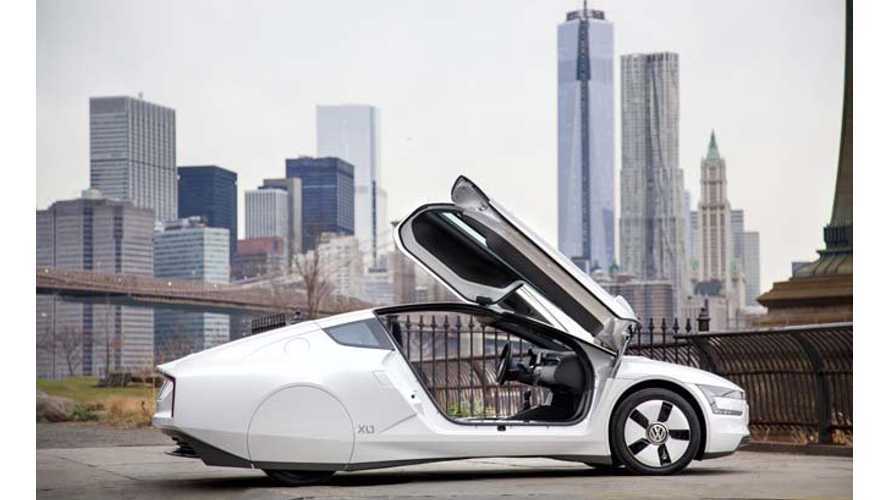 We're beginning to think that Volkswagen is now coming around to the idea of possibly offering its fuel-sipping XL1 in the US at some point in time.

Why else would the German automaker continue to show off the vehicle on these shores if it had no intent on ever making it available here?

Officially, VW still says that the XL1 is a no-go for the US, but perhaps that stance will change in the future.

Here we present images of the Volkswagen XL1 on the streets of New York City.  VW brought the XL1 to NYC as "part of a month-long American tour that took in Los Angeles, Washington D.C., and the Big Apple."

Showcasing a vehicle amongst people that can't ever buy it is unusual for an automaker, so maybe VW has something up its XL1-in-the-US sleeve.

• XL1 can operate as a pure EV for up to 31 miles • Two-cylinder TDI engine displaces 0.8 liters, makes 48 horsepower • Best aerodynamics of any production car: Cd of just 0.189 • Super-low weight of 1753 pounds achieved through extensive use of carbonfiber, aluminum, and magnesium • 250 will be built at Volkswagen’s Osnabrück factory in Germany

New York - New Yorkers got a glimpse of the future this week, as the Volkswagen XL1 arrived in the City as part of a month-long American tour that took in Los Angeles, Washington D.C., and the Big Apple.

The XL1, which looks like it could have driven off the set of a sci-fi movie, is the most fuel-efficient production car in the world, with a European combined fuel consumption rating of 261 mpg and CO2 emissions of 21 g/km. Thanks to its plug-in hybrid system, this two-seater can also cover up to 31 miles as a zero-emissions electric vehicle.

To achieve this incredible fuel economy, Volkswagen engineers married an incredibly efficient, diesel-electric plug-in hybrid (PHEV) powertrain with a lightweight carbonfiber structure and the best aerodynamics of any production car in the world. The XL1 weighs just 1753 pounds, has a coefficient of drag of just 0.189, and uses a 48-horsepower two-cylinder turbocharged and direct-injection TDI® Clean Diesel engine that is mated to a 27-horsepower electric motor, a seven-speed DSG® dual-clutch automatic transmission, and a 5.5 kWh lithium-ion battery. Thanks to this formula, this super-efficient Volkswagen can cruise at a constant 62 mph while using just 8.3 horsepower. In all-electric mode, the XL1 requires less than 0.1 kWh to cover more than 0.6 miles (one kilometer).

The 261 mpg fuel consumption figure is a record for a production car, showing that Volkswagen is in the automotive industry’s technical vanguard. The XL1 also has a top speed of 99 mph and can accelerate from 0 to 62 mph in 12.7 seconds.

Conceptually, the XL1 represents the third evolutionary stage of Volkswagen’s 1-liter car strategy. At the start of this current millennium, Prof. Dr. Ferdinand Piëch—currently Chairman of the Supervisory Board of Volkswagen AG—formulated the visionary goal of producing a practical car that had a combined fuel consumption of one liter per 100 km (235 mpg). In the two-seat XL1, this vision has become reality.

Despite the tremendous efficiency of the XL1, the engineers and designers successfully came up with a body design that delivers more everyday utility than the two previous prototypes. In the L1, the 1-liter car that was shown in 2002 and 2009, the driver and passenger sat behind each other for optimal aerodynamics; in the XL1, the two occupants sit slightly offset, side by side, almost like a conventional vehicle.