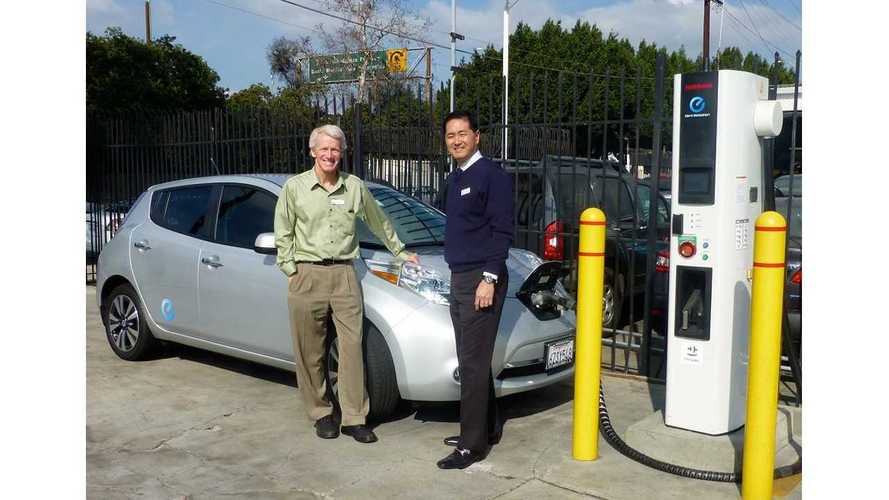 Today, Paul Scott, a noted electric vehicle advocate, will accept a 2013 Governor’s Environmental and Economic Leadership Award (GEELA) on behalf of Nissan of Downtown Los Angeles, where Scott sells the Nissan LEAF.  This award  is one of 13 announced, and is "California's highest and most prestigious environmental honor."

A lifelong environmentalist and top national LEAF salesman, Scott has also worked tirelessly to promote EV charging infrastructure while at the dealership, which is being honored for an “innovative spirit and value to California’s environment and economy.” The dealership is first to win in the award’s new category for dealerships that have led in sales of zero emission vehicles and shown exceptional outreach, customer support and efforts to create a greener operation. The award is administered by the California Environmental Protection Agency and will be given to recipients today in Sacramento.

“Paul is one of the most dedicated activists and educators I have ever met for both electric cars and solar,” said Chris Paine, director of “Who Killed the Electric Car?” and “Revenge of the Electric Car.”  “He knows the issues, he's passionate and takes personal risks, he puts his money where his mouth is, he's tireless even when exhausted, and he walks the walk. He truly is one of California's finest assets and I've met a lot of people in my 20 years here. He not only believes, he's making it happen.”

Fast Charging Can Be Found At The Dealership As Well

A founding board member of Plug In America, the nonprofit organization widely credited as critically instrumental in bringing EVs back into auto showrooms, Scott helped bring about installation at Nissan of Downtown L.A. of one of the area’s first EV quick chargers, which LEAF and other EV drivers may use for free around the clock. He helped organize several EV ride-and-drives at large local corporations, and trains the dealership’s staff—which boasts one of the nation’s highest LEAF ownership rates—about the environmental, economic and national security benefits of EVs outlined in the documentary about his ill-fated lunch with President Barack Obama.

Nissan of Downtown L.A. and its parent group, which owns seven other area dealerships representing seven major automakers, aspire to lead the nation in plug-in vehicle sales. The dealership also plans to install a large solar carport powering its EV chargers, and other needs, so that it may sell every EV with a “full tank of sunshine,” as Scott says.

“Nissan of Downtown L.A. is honored to receive this first-time award from the state of California,” Scott said. “As climate change worsens and our economy continues to struggle, the stakes have never been higher. However, the price of EV ownership and solar power has never been lower! Driving an EV charged with renewable energy means zero pollution, from well to wheels. This solution is accessible to more Americans than at any time in our history. It helps the Earth, it helps our economy.”

About the award (as per press release):

Established in 1993, the GEELA award recognizes individuals, organizations and businesses that have demonstrated exceptional leadership for voluntary achievements in conserving California's resources, protecting and enhancing the environment, building public-private partnerships, and strengthening the state’s economy.