GM CEO Akerson Retires, Mary Barra Takes Over - But What Does It Mean For GM Plug-Ins? 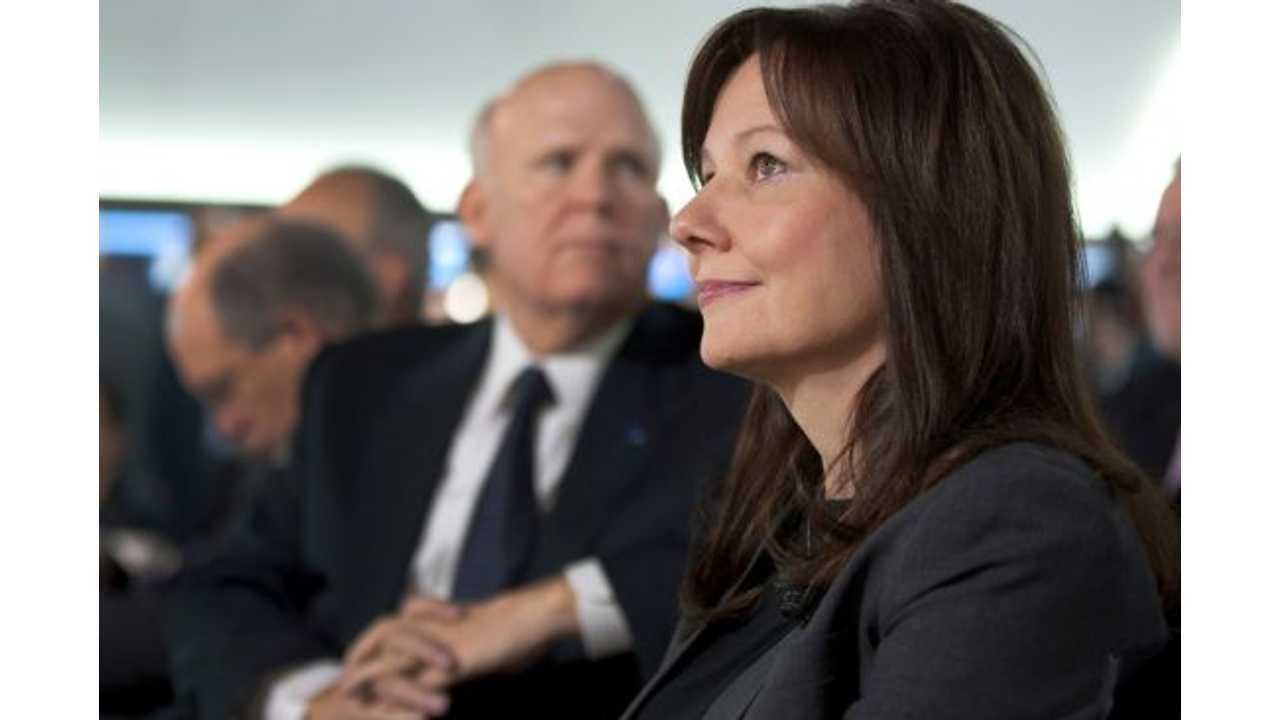 General Motors has announced that CEO Dan Akerson will be leaving the company in January of 2014, and executive vice president of Global Product Development, Purchasing and Supply Chain Mary Barra will be taking over.

Putting things as bluntly as possible, outgoing CEO Dan Akerson was no friend to plug-in vehicles, or the Chevrolet Volt at GM as far as we can tell.  Mr. Akerson took a position on GM's Board in July of 2009, and since taking over the CEO reigns on September 1st, 2010 from Ed Whitacre and Chairman duties in January of 2011, the plug-in program at General Motors has gone "silent running."

Also gone during his reign at GM was the seemingly daily talks about the happenings with plug-ins at GM, much of the media access to executives was revoked, the technology updates thinned, and the closure of web portals dedicated to cars like the Chevy Volt happened;  you name it...if it was about the electrification of the automobile at GM, whatever was (or was not) happening was now a 'state secret' under Akerson.

Looking back now, it turns out pretty much nothing was happening when it came to plug-ins during Akerson's time at the top - just the implementation of a plan that already was put in motion by the previous management at the General under Rick Wagoner, Bob Lutz and Jon Lauckner - a plan that was held up during the bankruptcy process as "the future" of company, and as a primary reason that the company should be saved.

During Akerson's watch, no new plug-in concepts or new product offerings of consequence have appeared, and almost all the original engineer braintrust and managers behind the Chevrolet Volt/Cadillac ELR have long left the building for greener pastures:

But to be fair, Akerson was a representative of the U.S. Treasury after GM's rinse through bankruptcy, so he was more concerned with the short-term bottom line (and the government's money) than the future presence of the company.  And GM has consistently banked profits every quarter since he took the helm.

Will We See A Return Of The High Profile Plug-In Concepts And Future EV Offerings From GM?

Now that the US Treasury is out of GM, so is Akerson.  And in his place is long time employee, and former Hamtramck plant manager (where the Volt is currently made) Mary Barra.

So what can we expect from Ms. Barra as far as the future of the Chevrolet Volt, and other plug-in vehicles?

Naturally, it is still way too early to tell definitively; but what we can do is look at her track record in the past.  For much of the life of the "current gen" of plug-ins at GM (Chevrolet Volt, Spark EV and Cadillac ELR), she has served as the senior vice president of Product Development & Global Purchasing.

Here are some quotes of note from the new CEO:

"We take enormous pride in the Volt and what it represents – a new era of electric vehicles. And we will take every precaution to assure our customers and the public of our total commitment to safety of anyone who drives the Volt." - November 28th, 2011 during call on NHTSA investigation into the Volt's battery

"Whether we design and build in house or work with outside partners, our goal is always to deliver the best technology in the business, as fast as possible, to customers around the world." - speaking on forming alliances with LG, A123 and SAIC on developing electric vehicle technology - October 10th, 2011

"What started out as a technology proof point... has turned into a real-world starting point to push EV technology further and faster than we thought possible five years ago.  The unique propulsion technology pioneered in the Volt – the same technology that will be featured in the Cadillac ELR – will be a core piece of our electrification strategy going forward." - November 2012

Will The Volt-Based MPV5 Concept Finally Now Be Green-Lighted For Production?

Ms. Barra also noted last year that GM will have up to 500,000 vehicles on the road with some form of electrification by 2017, with a focus on plug-in technology.

Therefore it would seem, at least on first blush, that General Motors is getting a more pro-EV minded boss than was had before in Mr. Akerson.

And that has to be a good thing!

Video Below: Mary Berra talks to Becky Quick about "No More Crappy Cars" in a Fortune interview from October: