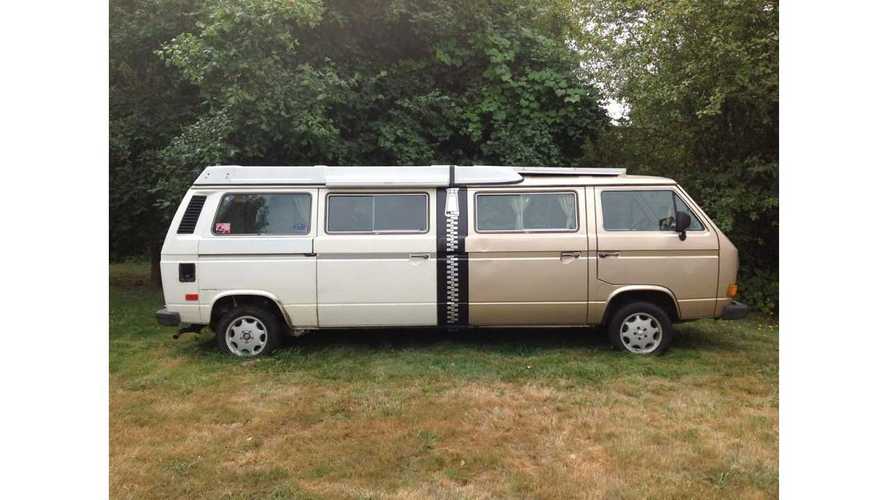 That Model S was written off by Dovi's insurer as totaled and then slapped with a salvaged title.

The damage was extensive, though mostly cosmetic and limited to the driver's side, mostly in the frontal area.

A man by the name of Otmar Ebenhoech is now officially (confirmed via email from Otmar to InsideEVs) in possession of that exact Model S.  Before jumping into the story, let's first turn to Dovi and the thoughts he conveyed to InsideEVs when asked if he was aware of where his former Model S ended up:

"Yes, I’m aware of this project. Otmar contacted me a few weeks ago with the idea and some questions about the car he had just won at auction. I think it’s a fascinating project and asked him to keep me in the loop as things progress. I feel like a satisfied organ donor, it would have killed me to know the car would be junked!"

Joe's "donor" Model S will be brought back to life by Otmar in the form of a stretched Volkswagen Vanagon called Strechla.

The Vanagon will exist only on the outside.  On the inside, underside and everywhere in between, you'll find Model S.

"It was last spring when the Stretchla project started to take shape. It all started when the young TDI engine in the Stretch threw a connecting rod through the block coming home from California on I5, ironically it happened not long after I passed a car carrier full of new Teslas heading north for delivery."

The thought of buying another internal combustion engine and spending a greasy week installing it was depressing to me. I parked the Stretch in the yard. Later I was camping in my electric 914 when my friend Jon suggested converting the Stretch to electric power. After all, he reasoned, most of the camping was within 100 miles and many campsites have power for charging."

He was right, but that wasn’t going to get me from my home in Oregon to my favorite winter camping in Death Valley. At some point I noticed that Tesla was planning to put a Supercharger station just outside of Death Valley on Hwy 395. If I could only get the Stretch to plug into Superchargers I’d have it made."

"I’m sure you can all see where this is headed now. I love VW bus camping, EV’s and modifying cars. It’s simple really, I’ll buy a Tesla Model S and graft it onto the bottom of the Stretch."

Otmar's "donor" Model S was purchased at auction for $38,100.  After fees and transport costs, Otmar spent $42,000 to get the Model S and, as he tells InsideEVs, "I've got my work cut out for me just fixing basic functional damage."

While we see several hurdles standing in the way for Otmar, perhaps the biggest ? is whether or not Tesla will allow the finished vehicle to still use the Supercharger network.  It's this hurdle that we hope Otmar is able to overcome and, with that in mind, Otmar says the vehicle will use virtually every part/component found in a Model S except for its body panels.  If that holds true, then should Tesla still allow use of the Supercharger network?  Or are there other grounds on which Tesla could flip the switch off for Otmar?

Regardless of the final outcome, we applaud Otmar for his efforts and hope that Strecthla proves to be everything he hopes it is.  We see a lot of blood, sweat and tears going into this project.  Good luck!!!

Video below shows removal of VW's old drivetrain in preparation for Model S fitment.  Just this task is claimed to have taken 7 hours: