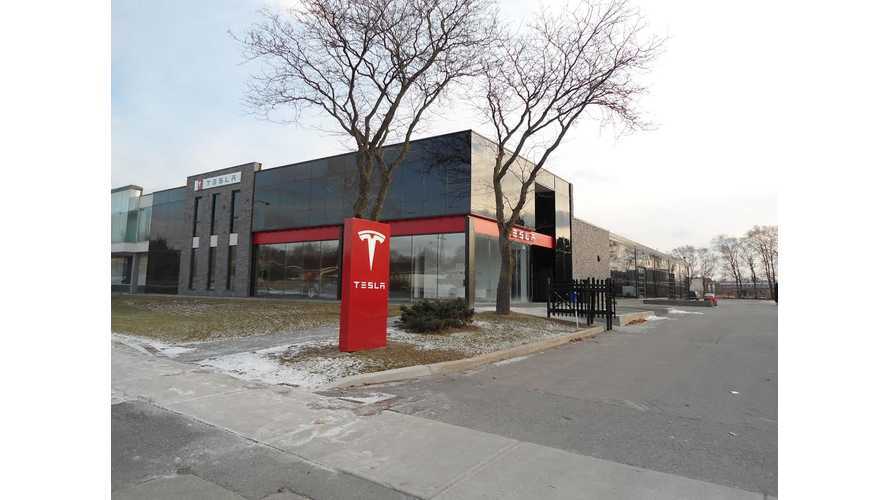 Say what?  Two Tesla stores in a single city?  And it's a city in Canada?

It seems odd to us, but Tesla Motors has officially opened its 2nd retail store in Toronto.  This store becomes Tesla's fourth store in total north of the border.

The latest store in Toronto is different in that a service center (4th service center in Canada) is actually attached to it.  They do share the same physical address, so we assume they're attached (perhaps someone in the Toronto area can confirm?).

Update: December 12th, 2013:  Local resident and InsideEVs reader Frank popped by the latest Tesla store/service center and fills us in on some of the details...and pics.  Big thanks to Frank!

Yes, the service center is connected to the showroom.This is a major facility.  Location close to freeways.About 900m east of the Don Valley Parkway on Lawrence East, and not far from the 401.

Cloaked in floor to ceiling glass done in the usual modern Tesla way.  Uncluttered, good lighting.  You walk up to the building the glass sliding doors open.  On the left as one walks in is the showroom facing the road with a model s car and behind it just a model S chassis and on the wall a flatscreen with I forget what on it.T  his model S has its LED lights on 24/7.  It looks so cool at nite with the lit tesla sign in front of the building lit up also.

On the right as you walk in, in the center of the building and running the full length of the building is a grand hall that ends at a ramp that empties into the service area which is just as clean and bright as the showroom areas.  On the initial right side of the  hall are some desks with computers and chairs for business.  In the center some vehicles on display.  The immediate left a bay with another models S, then further down on the left is a long bay with a line of covered vehicles ready for delivery.  On the right side a lounge area and further down on the right is a glassed in area overlooking the ramp and the immaculate service area.  The service area had six service bays plus a detailing bay.

I include some very unprofessional pics   (Editor's note:  Pics are fine Frank - attached in gallery below).  The absolute strict rule was "no pics in the service area".

Tesla's 1st Toronto Service Center, Which is Actually a Part of the Tesla Store, Opened Last Friday Too