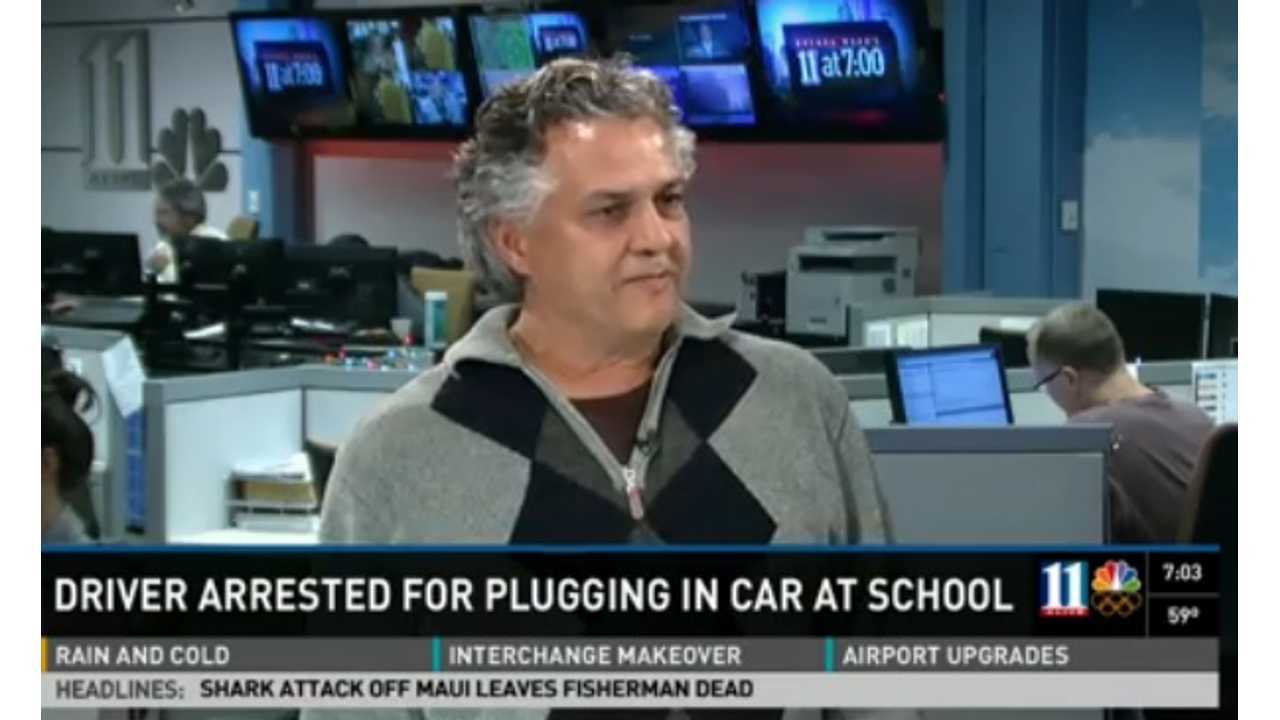 Just the other day, we reported on a Nissan LEAF driver who was jailed for reportedly stealing approximately 5 cents worth of electricity.

As we stated at the time, it probably wasn't a wise decision for the LEAF owner to plug in without permission.

School Tennis Courts Are Not For Public Use

Well, wise is not what this particular LEAF owner was.

The local authorities have issued a statement, which we regard as the truth in the matter.  What was once thought to be unfair treatment of an electric vehicle owner will now be viewed in an entirely different light.

Here's the statement in its entirety:

“We received a 911 call advising that someone was plugged into the power outlet behind the middle school. The responding officer located the vehicle in the rear of the building at the kitchen loading dock up against the wall with a cord run to an outlet. The officer spent some time trying to determine whose vehicle it was. It was unlocked and he eventually began looking through the interior after verifying it did not belong to the school system."

"The officer, his marked patrol vehicle and the electric vehicle were all in clear view of the tennis courts. Eventually, a man on the courts told the officer that the man playing tennis with him owned the vehicle. The officer went to the courts and interviewed the vehicle owner. The officer’s initial incident report gives a good indication of how difficult and argumentative the individual was to deal with. He made no attempt to apologize or simply say oops and he wouldn’t do it again. Instead he continued being argumentative, acknowledged he did not have permission and then accused the officer of having damaged his car door. The officer told him that was not true and that the vehicle and existing damage was already on his vehicles video camera from when he drove up."

"Given the uncooperative attitude and accusations of damage to his vehicle, the officer chose to document the incident on an incident report. The report was listed as misdemeanor theft by taking. The officer had no way of knowing how much power had been consumed, how much it cost nor how long it had been charging."

"The report made its way to Sgt Ford’s desk for a follow up investigation. He contacted the middle school and inquired of several administrative personnel whether the individual had permission to use power. He was advised no. Sgt. Ford showed a photo to the school resource officer who recognized Mr. Kamooneh. Sgt Ford was further advised that Mr. Kamooneh had previously been advised he was not allowed on the school tennis courts without permission from the school . This was apparently due to his interfering with the use of the tennis courts previously during school hours."

"Based upon the totality of these circumstances and without any expert advice on the amount of electricity that may have been used, Sgt Ford signed a theft warrant. The warrant was turned over to the DeKalb Sheriffs Dept for service because the individual lived in Decatur, not Chamblee. This is why he was arrested at a later time."

"I am sure that Sgt. Ford was feeling defensive when he said a theft is a theft and he would do it again. Ultimately, Sgt. Ford did make the decision to pursue the theft charges, but the decision was based on Mr. Kamooneh having been advised that he was not allowed on the property without permission. Had he complied with that notice none of this would have occurred. Mr. Kamooneh’s son is not a student at the middle school and he was not the one playing tennis. Mr. Kamooneh was taking lessons himself.”

Updated video posted below, which was put out by 11Alive after getting wind of the LEAF driver's questionable story: