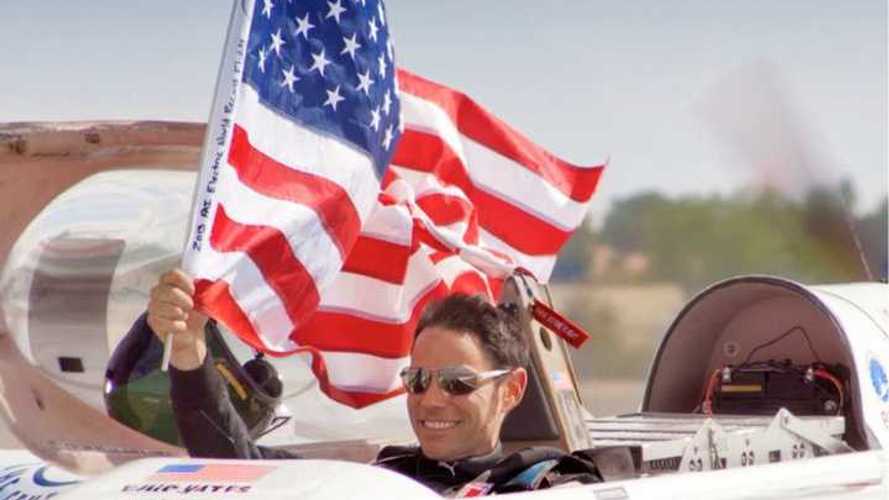 After adding three electric airplane records in September, Chip Yates expanded his portfolio by two more for a total number of 6 records for EV flight.

The latest records, which are Guinness World Records, were set earlier this month at the California Capital Airshow.

"Thousands of spectators at the former Mather Air Force Base outside Sacramento craned their necks on Saturday to watch history being made and hear Yates’ voice from the cockpit as the all-electric plane climbed from a dead stop to the target 500M in 62.58 seconds, a full 17 seconds ahead of the existing fastest time of 1:20. “We’re at 1000 ft…1200 ft…1400 ft…1640 ft…we’ve done it in just over a minute…a new world record!"

On the second day, Chip Yates set a world record for electric plane speed over one kilometer (0.62 miles). Long-ESA did 220.9 mph and 212.9 mph in two opposite-direction passes, which gave an average speed of 216.9 mph. Nobody ever flew so fast in electric plane.

"Sunday, the Long-ESA was back in action to set a second world record, this time for speed over a 1km course averaging two passes, one from each direction. Yates piloted the electric aircraft to 220.9 mph on the first pass and 212.9 mph on the second, resulting in a new world record of 216.9 mph. This brings the total electric vehicle world records achieved by Yates and his team to an unprecedented 16."

Yates still plans on attempting two more world records for speed over a course of 3 km and 15 km.