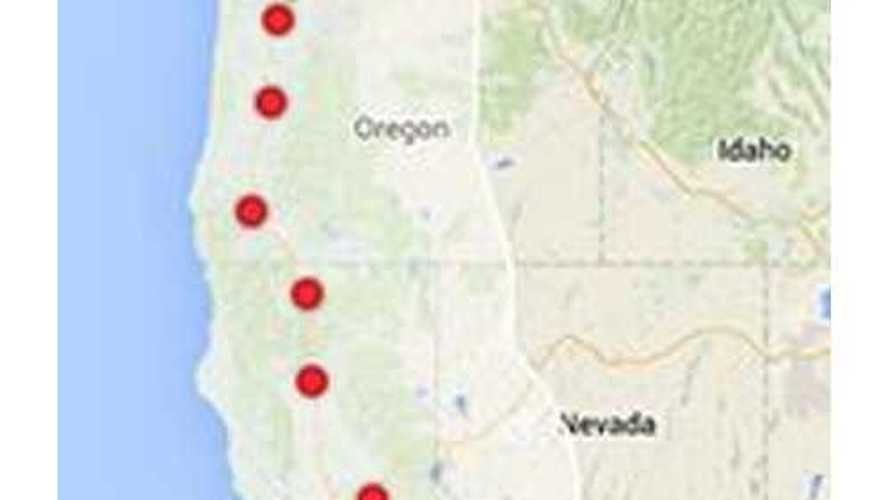 Tesla Superchargers in US

Tesla Motors is pleased to announce that its West Coast Supercharger corridor is so complete that road trips from Vancouver, Canada to the Baja California Peninsula in Mexico are now possible for Tesla Model S owners.

To celebrate this occasion, Tesla Motors will set out on a road trip today from San Diego, California and will head north to Seattle, Washington.

Along the way, 4 Supercharger ribbon-cutting ceremonies will be held.

The sites for ribbon-cutting include:

Those interested in following the progress of Tesla's first Supercharged West Coast road trip can do so here: #DriveFree Road Trip on Twitter.

With stations along U.S. Highway 101 and Interstate 5, the West Coast’s key routes, cities and destinations are connected by Tesla Superchargers. Model S customers can drive between San Diego, Los Angeles, Santa Barbara, San Francisco, Sacramento, Portland, Seattle, and Vancouver for free with minimal stops. More than 99 percent of Californians and 87 percent of Oregon and Washington owners are now within 200 miles of a Supercharger.

Tesla Superchargers are substantially more powerful than any other charging technology in the world, capable of charging Model S 20x faster than most public charging stations. Superchargers deliver up to 120 kW DC (Direct Current) power directly to the Model S battery, providing half a charge in as little as 20 minutes. Superchargers are strategically placed along major highways connecting city centers. Stations are located where customers want to stop, near amenities like roadside diners, cafes and shopping centers, so owners can stop for a quick meal while their Model S charges for free.

This morning in San Diego, two Model S will embark on a 1,750 mile #DriveFree road trip to Vancouver powered only by Tesla Superchargers. The journey will take them through Santa Barbara, San Francisco, Sacramento, Mt. Shasta, Portland, Seattle, and Vancouver, with stops at popular destinations such as the Santa Monica pier, Monterey Bay and the world famous Pike Place Fish Market. Throughout the trip, Tesla will be hosting owner and media events and providing real time updates from the road on Twitter, Facebook and Instagram