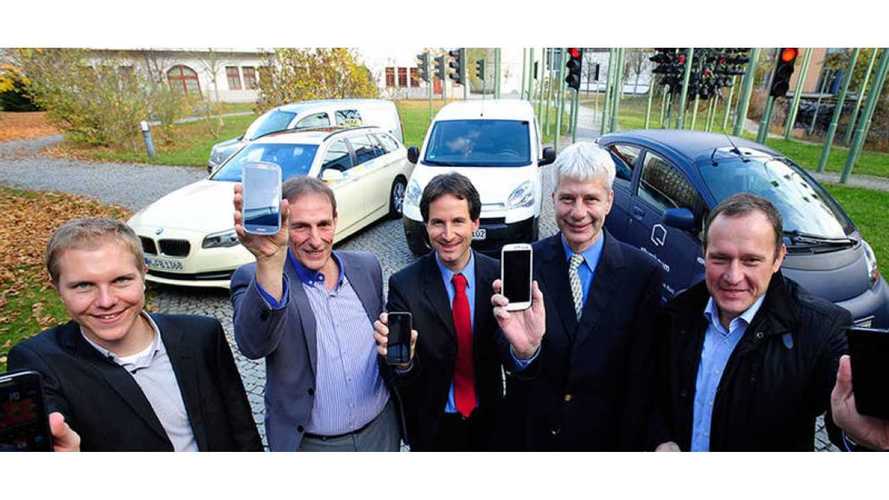 1330 virtual electric vehicles will soon hit the roads of Munich, Germany to test out how EV perform in real-world conditions.

Inside the Technical University of Munich - Yes That's a Massive Slide

Surprisingly, those virtual electric vehicles fit in the palm of one's hand.

Smartphones will becomes virtual EVs for the 130 selected trial participants who are asked to do nothing but drive their vehicles regularly.

"A fleet of 130 virtual electric vehicles is to be tested for viability on the roads in Munich, Germany. Researchers from the Technical University of Munich (TUM) have installed smartphones into local taxis and commercial vehicles to track their movements. Using this data, the smartphone’s software will tell how electric vehicles would perform under the same conditions."

"The last smartphones with virtual electric vehicle software are currently being handed over to the project participants. Once that is completed, the first phase of the “Virtual Electromobility among taxis and commercial vehicles in Munich” (VEM) project will begin. This phase entails capturing data on the mobility behavior of the participating drivers."

The software installed on the smartphones was developed by Technical University of Munich's Institute of Automotive Technology.  The idea is that the software will be able to "simulate the operation of an electric vehicle on each of the smartphones," according to Daily Fusion.

The idea is that the phones will be able to track vehicle location, acceleration, braking an so on via GPS.  The data will be collected and analyzed in real-time.  The end result is that the drivers will see how much charge remains based on a pre-determined virtual EV that will be configured for use in this test.  This is believed to be the first time that smartphones will be utilized in this sort of way.

Or, as Daily Fusion describes it:

"The phones will record the exact location of the vehicle via GPS, along with driving behavior like acceleration, deceleration and turns. Once this driving data has been collected, the software will calculate the energy consumption for a freely configured electric vehicle and show the charge status of a virtual electric vehicle’s battery."

So, basically the smartphone becomes the SOC indicator for the vehicle, though the particular vehicles driven in the trial will be ICE.  The idea, we believe, is to prove to the virtual EV users that a real EV would suit their daily needs.

If the trial is a success, then we hope the app becomes readily available to the public.  This may well be what's needed to really drive up EV adoption.