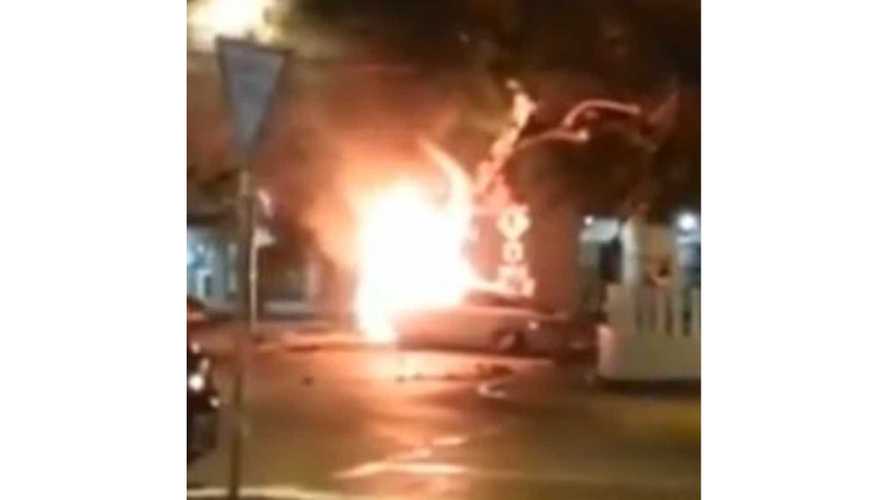 Location: Merida, Mexico in the northern area of the Yucatan Peninsula

Time of incident: 4 AM

Cause of fire: Violent crash with low wall after vehicle jumped curb and went airborne.

Driver:  Observed driving at speeds in excess of the speed limit.  Fled the scene of the accident.  Injuries unknown.

Passengers:  If present, believed to have fled the scene, too.  Injuries and number of passengers unknown.

Additional information: Unknown at this time

UPDATE: Liz Jarvis-Shean, a Tesla spokeswoman, issued this statement on the crash:

"We were able to contact the driver quickly and are pleased that he is safe.  This was a significant accident where the car was traveling at such a high speed that it smashed through a concrete wall and then hit a large tree, yet the driver walked away from the car with no permanent injury."

UPDATE 2: This info comes directly (via Google translate) from Yucatan.com, who was on the scene following the Model S wreck:

According to witnesses, the driver was traveling under the influences of alcohol and apparently injured.

According to the data, the mishap occurred on Avenue Chamber of Commerce 32nd Street San Antonio colony Cucul, right in the roundabout Pocito .

The Tesla plates 89-73 ZAN- journeyed from west to east on the avenue.

At the roundabout, due to excessive speed, the driver at the wheel lost control and crashed into the lining of the gazebo.

The vehicle bounced, jumped the curb and crashed into the site 248 , owned by Ligia Marrufo ; demolished a part of the electrified fence and then crashed into a tree. On impact, the vehicle caught fire.

With the help of other drivers, the driver got out of the car and boarded a private vehicle in which he fled.