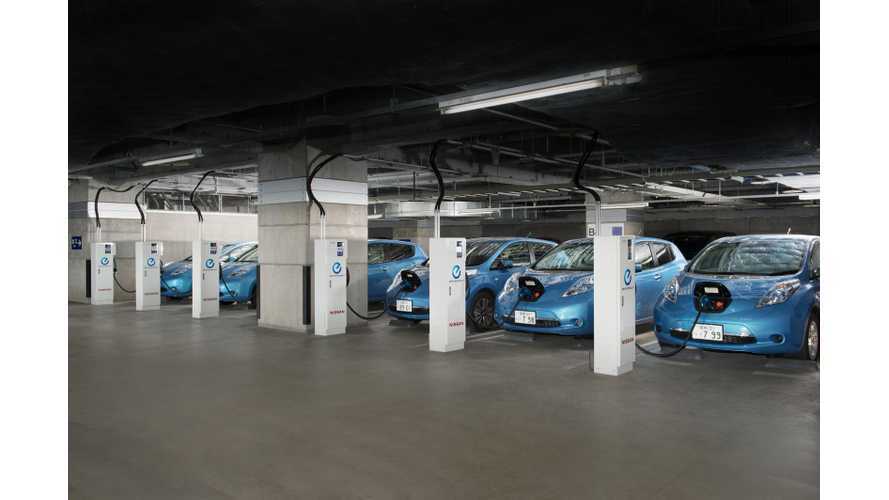 Nissan is not slowing down in terms of developing additional functions for electric cars.

After introducing a 6 kW bi-directional LEAF-To-Home system in Japan last year, the Japanese company is now working on something that will enable powering larger buildings.

Meet "Vehicle-To-Building", which has been tested in stealth mode since July at the Nissan Advanced Technology Center in Atsugi City, Japan.

Nissan's latest solutions allows the powering of a building from up to six LEAFs at the same time to lower electricity bills:

"Nissan has carried out a successful early field test of a system that will allow companies to regulate their electricity bills using the batteries of Nissan LEAFs used by their staff to commute to work. “Vehicle-To-Building" allows up to six Nissan LEAFs to be connected to a building's power distribution board. Charging is phased during the day so at peak hours, when electricity is most expensive, the building draws power from the cars. When electricity is cheaper it flows the other way. The system ensures the Nissan LEAFs are fully charged by the end of the working day for their owners to drive home."

According to Nissan, the Nissan Advanced Technology Center facility benefited from a reduction of 25.6KW during peak summer periods.

How does this translate into savings? Nissan said that based on current Tokyo Electric Power Company's rates, Vehicle-To-Building led to about 2.5-percent reduction of electrical power use during peak hours, which translates to nearly 500,000 Yen (~$5,000) per year in electrical power cost.

$5,000 annually isn't much , because first the facility owner must build the Vehicle-To-Building infrastructure, which easily could cost several times more. And then there must be enough number of LEAF drivers, which can not come to work too discharged. Finally, car owners would like to have some share in savings because they allow the use their batteries. And what if car or battery is leased?

We think there are still far too many questions about the viability of this setup, especially if Nissan plans to further test and refine its “Vehicle-To-Building" system.